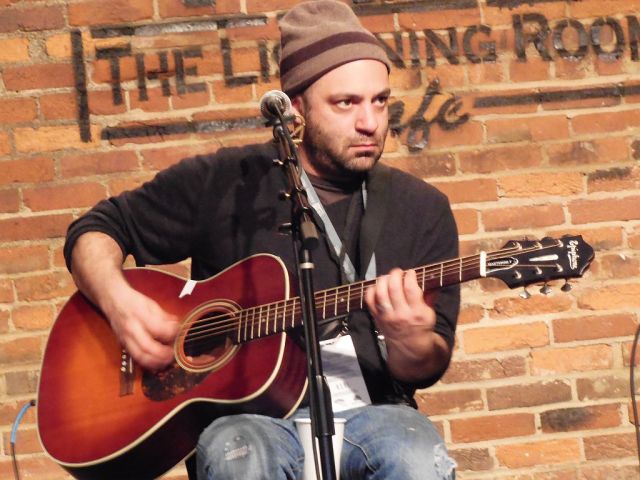 I am forever thankful for the day in 2006 when I saw The Bees play an in-store at Grimey’s. Ever since then, I have been an uber-fan of this band led by singer-songwriter Daniel Tashian. The band has since moved ahead one letter in the alphabet changing its name to The Silver Seas to avoid confusion with a British band of the same name. Along the way, The Seas have put out a solid catalog of smart pop-rock and made quite a name for themselves both here in Nashville and in the United Kingdom. I often speculate that if they had entered the more-welcoming-to-their-style music scene of 20 years earlier, Tashian’s band would have become superstars.

With the band recently on hiatus, Tashian has taken time off the road to raise a young family, maintaining instead a steady gig as a Nashville country songwriter with Big Yellow Dog publishing. He has had a nice smattering of “cuts” covered over the years and recently hit pay dirt when Josh Turner took Daniel’s “Hometown Girl” to #1. Lately, he has also played some gigs with a Fleetwood Mac-styled band called Skyline Motel along with fellow Nashville writers Sarah Buxton, Ian Fitchuk and Kate York.

Rounding out this colorful career, Tashian started with a 1996 solo album called “Sweetie” produced by none other than T-Bone Burnett. He also had the distinction of having a clever song that he never actually released called “Lifestyle” get into heavy rotation on local radio station Lightning 100. With several TV and movie song placements to his credit, one in particular, The Silver Sea’s “Catch Your Own Train,” made a prominent appearance in Season One of “Breaking Bad.”

Daniel is from a musical family, the son of folk duo Barry and Holly Tashian. Dad was also leader of 60s garage band The Remains who toured with The Beatles and was later a member of Emmylou Harris’s Hot Band.

It is with great pleasure as the self-proclaimed world’s biggest fan of The Silver Seas, that I present these “11 Questions” from Daniel Tashian.

I was born in Norwalk, CT. We moved to Nashville when I was in 4th grade. My Dad was working as a guitarist and singer for Emmylou Harris and The Hot Band.

The first record I bought with my own money was a 45 single of Elton John’s “I’m Still Standing.” The last one was Echoes of London by John Williams on CD. I love CDs.

The first concert I remember I was about four, and my Dad took me out at night to a club in Norwalk to see some R&B group. They had matching red-sequined jackets, and they danced together in choreography. I was impressed. I don’t know who it was though. The most recent concert I saw was the North Mississippi Allstars.

It’s tough to find a place that does both well, so you would have to make two stops. I like Starbucks cause it’s not too bitter. I like Dominos gluten free with pepperoni and green peppers

If the show isn’t too late I like P.F. Chang’s. Lettuce wraps and soup.

The Basement, The 5 Spot and 3rd and Lindsley although the lights are sometimes on too bright.