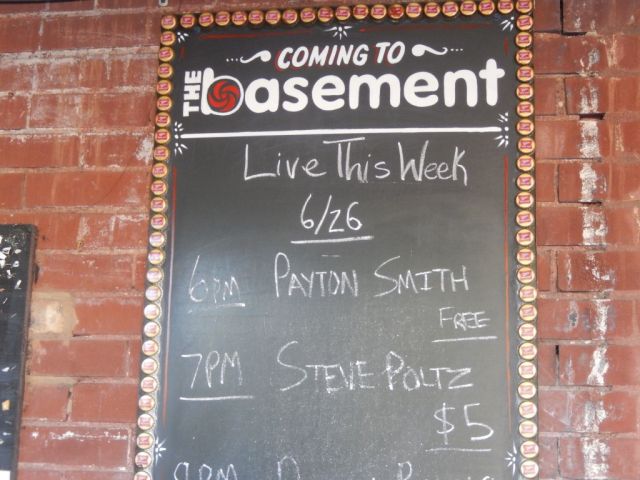 Warning! This concert review is written in the style of an overly-enthusiastic Steve Poltz.

Receiving a thunderous applause after finishing his first number, the auto-biographical baseball-themed “Brief History of My Life,” new Nashvillian Steve Poltz remarked in his usual hyperbolic style exclaiming “This is the greatest show I’ve ever done!”. Well you know what, it was the greatest show I have ever seen. Here’s why.

He is incredibly funny! Steve Poltz is so darn funny that sometimes I thought he should be at Zanies Comedy Night Club instead of The Basement. His off-beat sense of humor, delivered mostly through talking about his personal life, kept me grinning the entire evening—even after I got home and spent two hours watching live clips of him on YouTube.

He tells the best stories, and I think they all are true! Although I’ve heard it about a dozen times now, the story of how he and Jewel wrote “You Were Meant for Me” while on a Mexican drug bust with the Federales, always has me on the edge of my seat. And a new fact seems to surface every time he tells it! We also learned about his late gay Uncle Louie and the time Steve met his and my hero Paul Westerberg of The Replacements. Man, it was so detailed and intimate that I felt like it was me who met Paul.

He is a freakin’ awesome guitar player!  Thank you, dead gay Uncle Louie, for taking young Steve to see classical guitarist Julian Bream in concert. Hearing Steve play “Adelita” tonight, the song he went home and learned after being inspired by hearing Bream play it, was amazing. That Poltz sure has fast fiery fingers! He also did a cool John Hartford cover in a more picking style and another one that Steve himself wrote. Man, Steve Poltz is an acoustic guitar stud!

He played the song that he and Jewel wrote that was a big hit on MTV, and he was even in the video. I’m taking about that mega-hit that Jewel had in the 90s called “You Were Meant for Me.” Those two really wrote some great songs together, and the way Steve sings this one, it’s not a wimpy chick song. But, it will take you a few days to recover from seeing Steve without a shirt if you watch the video.

He knows every musician in Nashville, and they all like him. Man, I think I might have been the only person in the audience who can’t play the guitar and doesn’t write songs. Poltz moved to Nashville just a year ago, and I think he has made friends with every musician in town. He kept name-checking them since I think it kind of freaked him out too. Tommy Womack, Nicki Bluhm and Aaron Lee Tasjan were a few that he mentioned. I think that there were also a few there in disguise trying to learn from Steve’s songwriting skills.

He can make up really cool songs on the spot. He did this twice where he just made up stuff about the people sitting down in front. He even kissed a guy to get some of the lyrics such as one about how good the guy smelled. The second one he did got really chill when he used lots of loops and stuff to make it sound real wacky. He finished by telling us how special it was that no one will ever hear it again. Do you think I should tell him that I recorded the show?

He loves Bob Dylan like I do. He not only talks about Dylan a lot like most hip people do, but he closed the show with a sweet cover of my favorite Dylan song, “Forever Young.” This also happens to be the only song I ever sang live in front of a group of people. (I sang it to my kids at my birthday party once.) Steve’s version was better.

He’s a nice guy. He and I have only talked to one another a few times, and I’m sure he talks to a lot of people. But, I think he might have liked me so maybe we might become friends and start eating slices at Five Points Pizza together at least once a week. He was even nice enough to be a part of my “11 Questions to a Nashville Musician” series, and we also took this cool picture together. Since I’m kinda shy, I’ll just wait for him to call me!