Every working musician knows what they will be doing on New Year’s Eve—playing in a club through midnight to ring in the new year. Touring musicians may also find themselves playing on this night as well, often changing the timing of their set in order to be on stage when the clock hits the celebratory midnight moment. Some great historic concerts have happened on this holiday night, including one at New Jersey’s Capitol Theatre as 1977 turned into 1978. For one famous musician who was not working that night, it was just too hard for him to take a night off to relax and enjoy the evening.

Promoter John Scher welcomed everyone to the theatre with the greeting of “It’s New Year’s in New Jersey.” Southside Johnny and the Asbury Jukes were the New Year’s Eve headliners at the Capitol. Riding high on the success of their first two records, the band was moving from the clubs to the small theater, and this night was their biggest show to date. The Jukes were joined this evening by their founding member, producer and song contributor, Miami (he wasn’t called “Little” yet) Van Zandt on guitar and backing vocals. His special presence added the extra treat of him doing the Sam and Dave thing with Johnny on duets of “Broken Down Piece of Man” and “You Don’t Know Like I Know.”

The Juke’s set was on the money, and of course, whenever they played there was always the possibility of a Springsteen appearance. While it didn’t always happen, this night it did and in spades! Of all of the concerts I have been to, this certainly was the biggest musical surprise I have ever witnessed.

Another Asbury Park band, The Shakes opened the night, and The Jukes timed their set to start around 11:15pm. After a few songs, it was the midnight hour and surprise, surprise, a “loose” Bruce joined them in singing the Juke’s trademark show-stopper, Sam Cooke’s “Having a Party” right after the Miami Horns played the requisite “Auld Lang Syne.” Rockabilly singer, Robert Gordon, who was currently being embraced by the punk community, also joined in on the fun during “Stagger Lee” as did a steady flow of E Street Band members throughout the show.

Bruce stayed on for the rest of the set singing a little, but mostly just playing some added guitar. But, he really started letting go when he and Johnny set out to end the night trading vocals on an exhilarating version of Jackie Wilson’s “Higher and Higher.” The audience then started to head out the doors into the cold New Jersey night. I myself was in the lobby when I heard things starting up again. Bruce wanted to play some more, and everyone quickly rushed back inside to their seats.

Bruce and the E Street Band had not played together for over 9 months, and the Boss was just itching to perform. “I’m drunk and silly as a fool” said the man before kicking things off with covers of “Little Latin Lupe Lu” and “You Can’t Sit Down” during which he and the entire E Street Band were joined by several Jukes. 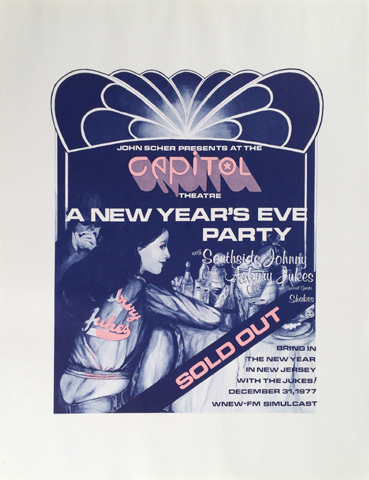 WNEW-FM was broadcasting the show live on the radio. Station DJ and Springsteen friend, Richard Neer was producing and MC-ing the event on the air and thought he’d just keep the tape rolling for a loose Bruce and the boys. But, Bruce was looking to just have some fun, and probably would rather not see a bootleg recording of this last-minute sloppy reunion. He gave word to kill the broadcast after the first two numbers, and it was then time for he and his band to get down to some serious business.

The surprise 45-minutes of Springsteen continued with “Backstreets,” “Born to Run” and came to a close with a cover of Gary U.S. Bonds’ “Quarter to Three.” “Backstreets” was a long extended version that included its first ever wrap with the lyrical improvisation that would eventually become the song “Drive All Night.” Maybe the E Streeters were a little sloppy, but this still was the best time I have ever had at 2am in the morning in Passaic. 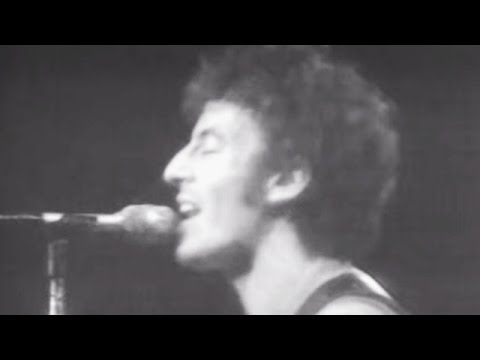 While for years I have had an audio tape of the FM broadcast and a rough audience recording of the E Street set, never did I ever think I would ever get to relive this night through video footage. Well, lo and behold, in late 2014, the Capital Theater/Music Vault video archives up at You Tube added both the Southside Johnny and Bruce Springsteen segments. They may be black and white and grainy, but they are nonetheless priceless.

One final footnote about this night deals with the pulling of the plug on the FM broadcast. Richard Neer spoke about this in his 2001 book FM: The Rise and Fall of Rock Radio. Neer claims that when the show supposedly ended, the Jukes manager had asked him if the station had signed off. While replying in the affirmative, he did not take this as a sign that he couldn’t turn things back on for Bruce and simply did.

Southside then became livid and started threatening Neer when he found out they were still broadcasting Bruce. Neer then found the fortitude to tell Johnny that he was holding out until he heard from Bruce. The Jukes manager soon got to Springsteen on stage who through some violent head shakes signaled to Neer to stop the broadcast. The odd thing is Neer’s claim that it all ended with Bruce profusely apologizing to him for Southside’s anger instead of taking issue with Neer’s zeal to make some radio history.