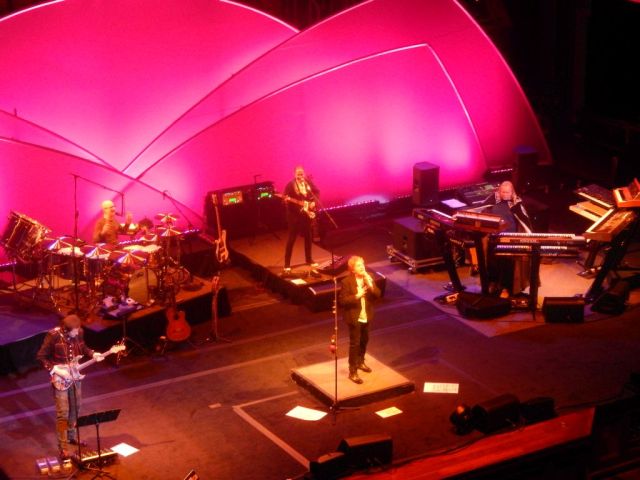 If you are looking for an in-depth analysis of this show by a die-hard Yes fan, you won’t be getting one here. One thing I’ve learned about music blogging, is that the less the writer knows about the band, the more he is likely to write about himself. So that’s my opening apology.

I loved Yes in the mid-70’s much like I did the other progressive or classical rock bands as they were more often called back then. Listening to New York’s WNEW-FM, mostly to the late great DJs, Scott Muni and Alison Steele, there was a lot of Yes, Emerson Lake & Palmer, and Peter Gabriel-lead Genesis stuff that I heard and loved. I even bought their albums on 8-tracks, but regretfully only managed to see ELP live back then.

Of course, my eventual musical snobbery, first with Country Rock then with Punk/New Wave, led me away from the prog stuff. But, slowly it started to creep back in. First with my young son becoming a Yes fan, and then a famous rock guitarist friend of mine just telling me how much he worshiped Yes. So, I started to listen, watch videos and lament over what I missed, hoping someday I’d get to see them live.

I won’t embarrass myself here amongst true Yes fans by going through the twisted history of the band’s line-up. Let’s just say that there has been a slug of personnel changes for records and different touring incarnations of the band. I shunned a recent show by “Yes” at the Ryman that featured my two fave records, Fragile and Close to the Edge, performed in their entirety. Although there were key original members in this version of the band, I didn’t want to hear anyone singing lead vocals other than Jon Anderson. Likewise, it’s hard for me to think of Yes without Rick Wakeman on keyboards.

So fortunately, it all came to pass that my chance finally arrived with the advent of Anderson, Rabin and Wakeman playing in Music City at the Schermerhorn. Despite some initial disappointment with the high ticket prices, I fortunately worked something out with a decent seat at a good price.

To sum things up, this show was everything I could have every wanted from my Yes experience. Jon Anderson’s vocals at age 72 sounded as good as ever. And young Rick Wakeman (he’s only 67) sounded brilliant as well, although his theatrics were much more subdued then they probably were back in the band’s arena days. (He was wearing a cape though.) I know little about guitarist Trevor Rabin’s days with the band but he certainly was a fine musician as was the unfamiliar rhythm section.

I was really impressed by how great the room sounded since the Schermerhorn classically-designed acoustics can sometimes ruin an amplified show. Likewise, the night’s song selection was a total treat covering just about all these ears wanted to hear. It was a true bucket list moment for me, and one that I’d relive again if I got the chance.