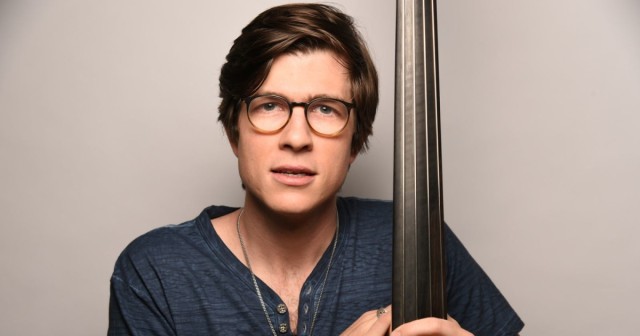 One Sunday a few years ago, without any introduction, a tall lanky young man with black-rimmed glasses that matched his dark hair, took the stage all alone at my church. Accompanying himself with a stand-up acoustic bass, he sang his song “The Lord is Coming” with a gentleness and beauty that just mesmerized the entire room. I soon discovered that this young man was Scott Mulvahill, and I’ve been a fan ever since.

Adept at his chosen instrument, Scott cut his teeth playing in the band of one of Nashville’s most proficient players, Ricky Skaggs. And since venturing out on his own, Mulvahill has become one of the city’s most promising young talents. Scott and his band play in a lively versatile style that’ll surprise you with their ability to stretch beyond their jazzy core.

Scott’s self-funded “Himalayas” LP was one of the best records to come out of Music City last year. Since then, he and his band have toured relentlessly as both an opener and headliner to get their music out in front of a wider audience. He recently released a cover of “How Sweet It Is” with his touring buddy Stephen Day and made an appearance on NPR’s Tiny Desk Concert that I insist you watch here.

I’ve been stalking him for a while, but now I’m quite happy to thank Scott Mulvahill for participating in the 11 Questions. I’ll go out on a limb and say that he’s the brightest new artist I’ve seen come out of Music City since I’ve started blogging about music. You can see Scott make his debut at the Grand Ole Opry this Friday March 22.

I grew up in a nice little slice of suburbia called Friendswood, TX, outside of Houston.  It’s a pretty normal place without a lot of drama, but we did finally get a good coffee shop a few years ago.  I came to Nashville in 2010, right after I graduated college.  I came for the music like so many, and I chose Nashville because it has not only a great scene of players and musicians, but also an unparalleled songwriting community.  I wanted to go somewhere that would feed and challenge me in both of those ways.

The first album I bought myself, if I remember correctly, was No Doubt’s Tragic Kingdom on CD.  Not long after that was Red Hot Chili Peppers Californication, but my dad made me return it!!  Nowadays, a lot of my listening is through streaming, but I recently bought Cory Wong’s The Optimist on vinyl, which is a jam.

I don’t remember what my first concert was, honestly.  I’m sure it was before I thought much about music. I didn’t get started playing until I was 14, so before that I probably saw live music here and there with my family but didn’t take it in the way I would now.  Recently, I’ve spent the last few weeks touring with Lauren Daigle, so I’ve been enjoying her show, which is tremendous.  While on tour in Minneapolis a few days ago I got to catch “Live from Here,” which is hosted by one of my musical heroes, Chris Thile, and it’s a TRULY eclectic mix of all kinds of music and comedy.  You don’t often hear covers of John Hartford and the B-52s in one place.

Ricky Skaggs!!  I’m a little biased because I toured in his band for five years, but I think most anyone would agree it’d be well deserved.  He was just inducted into the Country Music Hall of Fame, so I’m gonna predict now he’ll get his name there someday.

This is an unusual choice, but it may be the White Stripes Icky Thump.  I went through a long White Stripes phase. Just the raw energy of what they did was so compelling to me.  It was recorded at Blackbird, one of Nashville’s most famous studios.

I’ll answer this based on my favorite post-show experiences.  I’d say M.L. Rose is where you go after playing The Basement.  After the Ryman, you must go to Merchant’s on Broadway.  If you just played City Winery, see if the kitchen there is still open.  After a 3rd & Lindsley show, see what’s playing at Rudy’s Jazz Club and get the gumbo.

Gabe Dixon, Jordyn Shellhart and Andrew Peterson.  All very different artists, with different types of careers, but so great at the craft and so moving.

I’ve had the good fortune to play at the Ryman quite a few times.  It can’t be topped.  But I’ve had wonderful shows at City Winery and 3rd & Lindsley, and I absolutely love those rooms.  I also love the Basement and Basement East. I had one of my most magical live music experiences at the “Beast” when the power went out during my Paul Simon tribute show.  The crowd gathered us in and gave us some light with their phones, and we sang a cappella with just voices and my bass.

Gavin Kelso.  He’s a bass player and one of my very best friends, and I dunno if he’ll read this but I’ve been teasing him for years about moving here.

A LOT of touring.  And another album that I’m getting started on now.  What I did on my last album was fairly sparse and left a lot of room to explore different sounds based on the starting point of my bass/vocal songs.  So, I want to go down a few different paths, keeping my songwriting and playing at the center but dressing it up in different ways.  I’m excited to experiment and create!