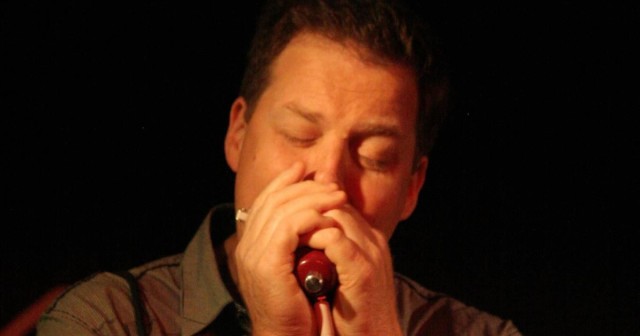 There are many cool regular gigs that happen around this magically musical town of ours. One that is well-worthy of your time is Tim Gartland’s monthly show at downtown’s Frist Center for Arts Cafe. Now, if Tim was just the helluva great Blues singing harmonica player that he is, that would be one thing. But, he also writes and performs some fine original music that lays a modern Americana-spirited sound on top of a classic Blues base that he learned from the masters. While living in Chicago, Tim studied with famed harmonica player, Jerry Portnoy (Muddy Waters, Eric Clapton) and played with such greats as Bo Diddley, Carey Bell, Big Jack Johnson and Pinetop Perkins.

On April 12, Tim releases his fourth record, “Satisfied” on Taste Good Music featuring ten original bluesy and rootsy songs recorded right here in Franklin, Tennessee. Simple folks like me get it when Tim sings on the title track in his smooth low voice that “the only bucket on my list comes Kentucky Fried.”

On the date of the new record’s release, you can see and/or hear Tim on WMOT-FM’s lunchtime live on the radio “Finally Friday Live Radio” show at the Nashville Palace. His next Frist gig will be Friday, March 22. It’s free and at 6pm.

If you’d like to learn from this master harmonica player, check out timgartland.com about on-line or in-person lessons. Tim’s study guide, “The Talking Harmonica” is now in its fourth edition and is available through Amazon.

Thanks go out to Tim for playing the 11 Questions game.

I was born in Northeast Ohio, in Warren. After graduating from Kent State, I lived in Chicago, Kansas City and Boston. I moved to Nashville in 2016. I moved here for the songwriter and music industry. The weather and the super cool people were also a draw.

The first record I bought was vinyl, Johnny Cash’s “Folsom Prison Blues,” as a boy at the local record store. The latest was a digital download of Ry Cooder’s latest release. I have loved Ry since I was a teenager.

My first concert was Muddy Waters when I was 13. I was blown away and began my path to becoming a roots/blues musician. The last show I saw Marc Brousaard. I am a lover of soul music, and he did some of my all-time favs. He is amazing.

Mick Jagger. Listen to some of his country-flavored tunes like “Dead Flowers”, “Let It Bleed” and “Far Away Eyes”. He co-wrote those tunes, and the records are amazing.

I like Frothy Monkey for their coffee. It’s Five Points for their pizza in East Nashville. It will buckle your knees.

I would have to say “You Don’t Know Me” by Cindy Walker and Eddy Arnold. It is the quintessential unrequited love story song. Every word and note are on point.

The plate my wife Trish makes for me when I come home! After that, I would say Sam’s Place.

Karen Leipziger, Paul Overstreet and Sheryl Crow. Now that would be very cool.

I like to play the Frist Art Museum and the Fillin’ Station in Kingston Springs. Two very different places but both places appreciate music that comes from the heart.

Buddy Guy so I could blow some harp behind him!

I just want to keep writing songs, particularly co-writing with a lot of different talented people! It is exciting to think of the possibilities that could come from these sessions!