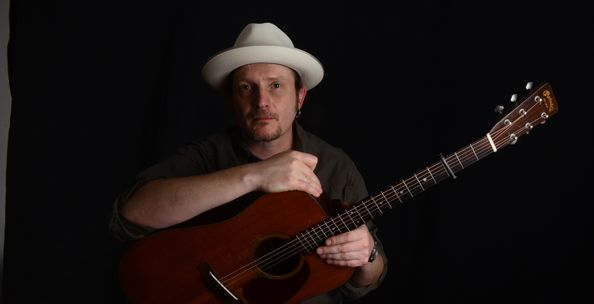 On February 1, local label Red Beet Records released “Riverland,” the second LP from the musical trio of Eric Brace, Peter Cooper & Thomm Jutz. This conceptual collection of songs about the Magnolia state of Mississippi was self-produced by the trio and recorded here at Thomm Jutz’s Mt. Juliet studio. It’s a delightful mood-setting storytelling session with shared vocals and some smooth and gentle pickin’ from these tasty players. 11 Questions is stoked to have now harvested answers from all three of these talented Nashville musicians.

Who is Thomm Jutz? Well, in his own words, as anyone with an ear to the world of Bluegrass already knows, “I’m a guitar player, producer, songwriter – in no particular order.” The list of artists that Thomm has produced, played guitar for, or written songs could easily fill a page. Jutz also runs his TJ Tunes recording studio up in Mt. Juliet.

When he’s not working with other artists and having hit compositions on the bluegrass charts, Thomm has also recorded a few records of his own. His latest was 2017’s “Crazy, If You Let It” on the Virginia Bluegrass label Mountain Fever.

We thank Thomm for his submission of 11. This March, the Brace, Cooper & Jutz trio are touring throughout England and return home for some more shows later in the year.

I was born in SouthWest Germany. I knew that I wanted to live in Nashville when I was a kid, but had to wait with moving here till I won a Green Card. I came here in 2001 and became a U.S. citizen in 2008.

My first record was a best of The Beach Boys on vinyl. I still think that “Surfer Girl” is one of the finest melodies ever written. The latest record I bought is a Blind Alfred Reed box set from Dust-to-Digital (CD). Dust-to Digital is a wonderful label out of Atlanta that just won two Grammys. Blind Alfred Reed was one of the people recorded at the 1927 Bristol Sessions.

My first concert was probably a German band called BAP that was very popular in Germany at the time. The first concert of an international artist was U2 with The Pretenders opening. The most recent one  was Gordon Lightfoot at the Ryman.

I don’t eat pizza in Nashville, and I like 8th & Roast for coffee.

In Search of a Song by Tom T. Hall and Notes & Grace Notes by Pat Alger

The bar at Husk.

The Bluebird calls and asks you to host an “In the Round.” Pick three local songwriters to joiny ou.

Tim Stafford. I love writing with Tim and would love it if he lived closer for purely selfish reasons. Shawn Lane would be another great one to have here.