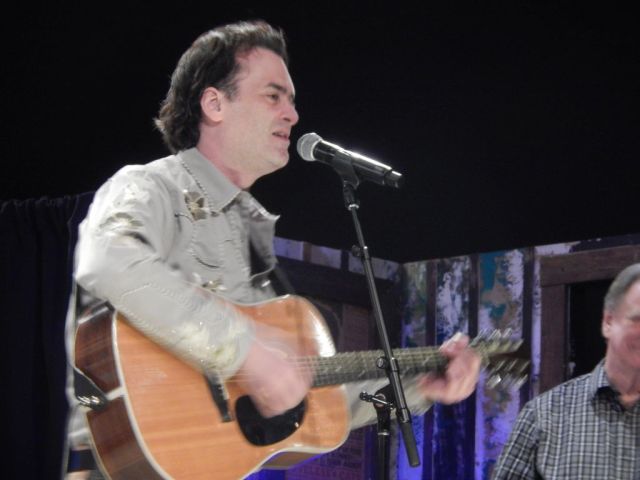 Peter Cooper has been a downright blessing to the Nashville musical community. From his newspaper days at The Tennessean through his current tenure at the Country Music Hall of Fame, he has always been someone whose views on all types of music has mattered to me. But, thankfully there is also a musical side to Cooper that has produced some satisfying work over the years. In addition to his solo efforts, he has worked as a duo with Eric Brace, and these two have now expanded to a trio with Thom Jutz. (They play the Station Inn next Saturday, September 9, 2017.)

When I think about Peter, two things come to mind. The first is how in writing for The Tennessean he called it straight in reporting on Ryan Adams infamous “Summer of ‘69” incident at the Ryman. He sure got Ryan’s goat, and Adams has since resorted to a revisionist history about what really happened. The other is that it’s hard not to love a songwriter who writes songs about baseball. Now, if only he were a Yankees fan!

So here goes, and thanks to Peter for being the solid journalist he is by providing perhaps the only submission to this column that required absolutely no editing whatsoever of any grammar, punctuation or spelling! I am also grateful for the reverence he shows for traditional country music and its classic artists. This is a deep respect that can be heard in the fine music he creates.

I was born in Florence, South Carolina, and spent a lot of my young life in various South Carolina towns. I was living in Spartanburg and writing for a newspaper there in 1999, when the great writer Jay Orr left The Tennessean. With the support of some friends, especially Ellen Pryor (creative Nashville’s guardian angel), I applied to be Jay’s replacement. I moved here and started writing about music for The Tennessean on March 15, 2000.

The first record I bought was Dan Fogelberg’s The Innocent Age. I bought it on vinyl, from the Columbia Record Club. The last album I bought is yet another copy of Jim Lauderdale’s CD, Pretty Close to the Truth. I buy that one up every time I see it, and give it away to people I like and respect. I bought that one at McKay’s. The last brand new thing I bought was Charlie Worsham’s Beginning of Things, purchased on vinyl from Grimey’s. Charlie is the answer to a question I’m often asked: “Whatever happened to good country music?”

The first concert I ever saw was Kris Kristofferson and Rita Coolidge, at Carowinds amusement park in 1977. It was hot as blue blazes. I later asked Kris if he remembered that show. He said, “Yeah, it was hot as blue blazes.” The last concert I saw was Jon Byrd at Station Inn. It wasn’t hot at all, but the music was great. Jon Byrd is among my favorite singers, and the Station Inn is a national treasure.

John Hartford. He embodies everything I love about Music City. My friend Thomm Jutz sat with John Hadley and wrote a song about Hartford called “Hartford’s Bend.” Beautiful song, and beautiful subject. John was an unabashed traditionalist and an unrepentant rebel all at once, every minute of his wonderful life.

I live in East Nashville. Most of my coffee time is spent at Bongo Java East, and most of my pizza time is spent at Five Points Pizza. The great thing about those places is that if you have a gig at night and you don’t have a band for your gig, you can walk into Bongo Java or Five Points and find world class players to be in your band. They’re either dining there or working there. Doesn’t matter: Either way, they’ll be great for your gig.

There is no good place to eat late night after a show. Late night after the show is not for eating. It is for drinking on the porch, after you drive home safe and sober. After a show is the time for reflection, rumination, and no small amount of self-loathing. These things are best done with bottles purchased from Woodland Wine Merchant.

First, I’ll quibble and say that I find the term “local” to be a minimizer. In Nashville, “local” songwriters are the best in the world. Calling them “local” is like calling someone in Chicago calling members of the Cubs “local” players. Okay, now that we have that out of the way… Thomm Jutz, Charlie Worsham, and Emmylou Harris would make for a great round. As would David Olney, Jeff Hanna, and Don Schlitz. Or Kim Carnes, Marshall Chapman, and Bill Lloyd. Or Matraca Berg, Jim Lauderdale, and Jason Ringenberg. Or Bill Anderson, Buddy Cannon, and William Michael Morgan. I could, apparently, go on and on.

I am thrilled anytime I get to play the Bluebird, the Ryman, or the Station Inn. When you play a note in any of these places, it feels like you’re adding an entry into grand and poetic encyclopedias.

I wish Paul Simon lived here. His last two albums contain some of the most marvelous music I’ve ever heard. It is incredible to hear a guy in his 70s making expansive and unprecedented sounds, and writing songs that are both radical and enriching. Simon’s blend of colloquial and enriched language is an absolute marvel. And he has friends and collaborators here like (genius fellows) Jim Oblon and Jerry Douglas.

I have just made a trio album with my buddies Eric Brace and Thomm Jutz. The album is called Profiles in Courage, Frailty, and Discomfort. We’re playing an album release show at Station Inn on September 9. After that, Thomm Jutz and I have several super-secret production projects in mind (including one that is so exciting that it makes my teeth hurt when I think about it), and I will be writing songs. I’m working right now to finish up what I believe to be the first-ever song to connect unrequited love with the Atlanta Braves’ potent double-play combination of the early 1980s. I’m pretty sure it’ll be the only song in mopey folk music history to be called “Ramirez to Hubbard to Chamblis.”