Little Steven & the Disciples of Soul @ CMA Theatre at the Country Music Hall of Fame and Museum / Nashville TN / May 15, 2018

The first time I ever laid eyes upon Steve Van Zandt was as a new member of Bruce Springsteen’s E Street Band in September 1975 at New York City’s Bottom Line. Sporting the Asbury Park-styled “Miami Steve” nickname at the time, to me, he was as imposing a foil on stage to Bruce as was the late Clarence Clemons. He wore a flashy suit and wide-brimmed hat that oddly seemed a bit too disco to me. But, he sure could play guitar. I was later surprised to later learn that although he was no stranger to Bruce and the Asbury scene, at the time, his tenure as an E-Streeter had only been a few shows.

Steve (even known as “Sugar Miami” for a spell) soon took up space my record collection through his songwriting, production and playing on the classic first three records by Southside Johnny & the Asbury Jukes. I even had the pleasure of seeing him front the band one night (maybe 1976?) at Asbury Park’s Stone Pony when John was under the weather. It was obvious back then that he knew how to lead a band and was a fine lead singer with a great stage presence of his own. He’d been on the Pony stage many times before and seemed both humble and disappointed that fans were standing still watching him perform rather than dancing. In addition to covering the Juke’s catalog, he also favored some old R&B and soul songs that night such as Bobby Womack’s “Across 110th Street.”

Cruising forward through his remarkable and varied career, Steve has most notably found his way into the Rock and Roll Hall of Fame as an E-Streeter. But, during a break in service, and later as time permitted, he also told us not to play Sun City, showcased great music through his Underground Garage radio show, played a New Jersey mobster on television, and made a lot of great music on his own. His solo recording career commenced with the original Disciples of Soul on the brilliantly-soulful 1982 LP, Men Without Woman. After a few subsequent records with mostly political overtones, Van Zandt has now come back full circle with some new Disciples on his latest big band bonanza LP, Soulfire.

After hearing the band’s wonderful New Jersey kick-off show on the radio, I never imagined we’d see the Disciples play in Music City. Having them come here was as much a surprise as was the venue they chose. This fabulous room located within the Country Music Hall of Fame mostly caters to its genre, and following a recent Billy Corgan solo show, Steve and his band are only the second rockers to grace its stage.

On this tour, socially-minded Steve extends a free invite to local teachers. Sadly, come show time, there were still a few seats unclaimed. However, knowing a good sound was in town, quite a few local musicians were in attendance joining the fans and teachers, including Steve’s fellow E-Streeter Garry Tallent.

When the band entered the stage, I couldn’t help but count that there were 14 Disciples accompanying Steve, including three lady backup singers. I also immediately recognized two long-time Jukes in the horn section: Ed Manion and Stan Harrison. There was also one old fellow that looked quite familiar who Steve later outed as “Banana” from 60s band The Youngbloods. 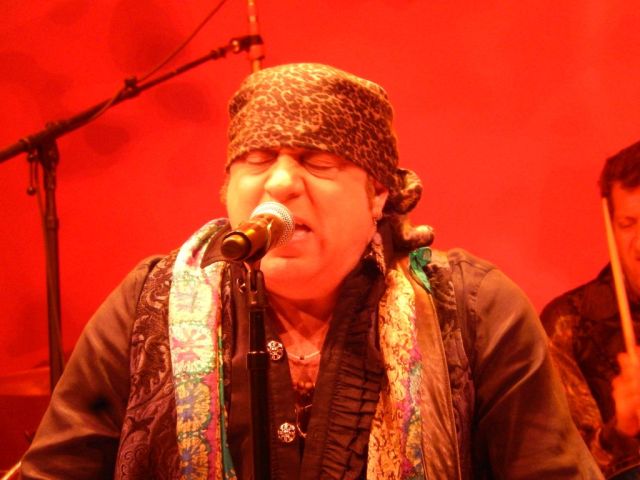 Among the many talents that Mr. Van Zandt possesses, being bandleader and arranger for such a large ensemble is surely one of his best. Miraculously, with all those players going at it, it never sounded too busy, and it didn’t seem that there was a note going to waste. Steve’s voice was strong throughout the 2½ hour set without taking a break, and he also reminded us that his first recognized skill was his prowess as a lead guitarist.

Although the show’s theme was loosely structured, the scattered selection of cover songs was meant to showcase the different styles within the genre that we call rock and roll: Blues, Soul, R&B and Doo-wop. All sounded great as did the current and vintage Disciples of Soul songs. A bonus treat for these ears was the beautiful “Forever” from the first LP which I had not seen on previous set lists from the tour.

This was a long wonderful night of lovely-arranged and expertly-played music. Steve may always first be thought of as a Springsteen sideman, and I guess there’s nothing wrong with that. However, he has done so much on his own to forever be a legend in rock music history. There’s no denying that he is a great singer, songwriter, guitar-player and performer. 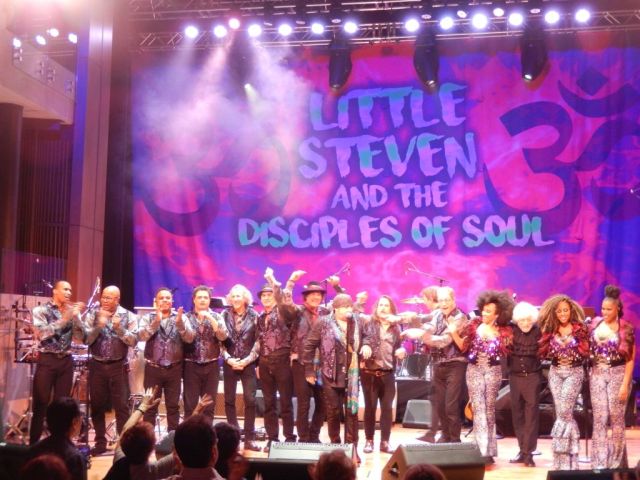