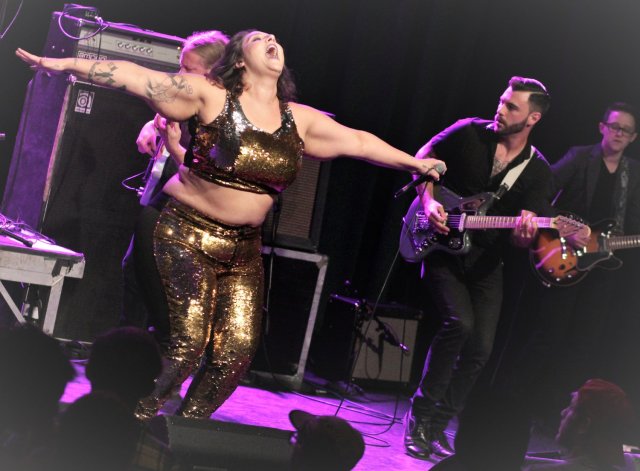 Hanging out at Grimey’s on Record Store Day in April 2013, I had separated from my friend who urgently texted me “Get over here right now – Alanna Royale is killing it!” My return text was a simple “I know. I’m right behind you digging it.”

From then on, we were both fans of the fiery soulful R&B sound of lead singer and songwriter Alanna Quinn-Broadus and her killer band. Yes, Alanna Royale is a band fronted by the singer and Jared Colby on guitar who both attended the Berklee College of Music in Boston.

A great debut full-length “Achilles” followed in 2014, and on 11/10/17, Alanna Royale recorded “Live at Welcome to 1979,” direct to disc at the Nashville studio here. Their live shows from The Basement to Bonnaroo have gained them a strong regional following, and they are surely destined for bigger things.

If you like that big horn-driven sound of Sharon Jones, Amy Winehouse or St. Paul and the Broken Bones, you will more than love Alanna Royale. They are a Nashville treasure.

Here is a link to Alanna Royale’s new single just out, “I Know.”  A new LP is due later this summer. Thanks to Alanna Quinn-Broadus for giving us her eleven!

I moved around a lot as a child, but ended up spending most of my youth in Albany, NY, then Boston for ten years until Nashville. I moved here when you could still rent a house for $900 a month.

My family was big on buying records my whole life, so I had a lot of albums before I had to buy one myself. But, I think the first I ever purchased was To the Faithful Departed by The Cranberries or CrazySexyCool by TLC.  Both were incredibly impactful on me for different reasons.

The last record I bought was a physical copy of a Michael Jackson remix LP (The Remix Suite) with remixes from DJ/producers like The Neptunes and Steve Aioki. I also bought an “Apache” / “Rapper’s Delight” 45 by Sugar Hill Gang. I pretty much never stop buying used vinyl, but it’s taking a toll on my checking account for sure. The last full track I bought digitally was a dance track called “Keep It Moving” by this insane singer Alex Newell. He’s a fucking crazy talented vocalist. Follow his Instagram, it’s amazing!

My first concert was New Kids on the Block with my entire Girl Scout troop thanks to my mom who is insane. The last show I saw was Raul Malo from The Mavericks solo at City Winery. I had full body chills the entire time. He’s out of this world.

No hesitation. Either the Dixie Chicks, because as far as I know, they are some of the bravest people in the country music industry. Or, Jackie Shane who has been living here in Nashville in seclusion for decades.

For coffee I go to Dose Coffee in East Nashville out of convenience and love for the staff. (They are the best!) But, my heart belongs to ZolliKoffee which is my queer coffee heaven. It’s attached to Jackalope, and they have a punch card which is so gratifying to an old woman like me. I’ll talk about pizza later.

Wow, that’s a tough one. Like, really, really tough. It’s a tie between Steelism’s Ism or my new release coming out this summer. That’s as objective as I can be. OK?

OK, Nashville has a real shortage of dope late night hangs if you just wanna eat. It’s a grudge. I demand satisfaction. But, I go where my people are, so Five Points Pizza is awesome because it’s so fast and I can get to my bed quicker. (This is almost always a goal at the end of the night post-show.) Also, the staff are my good pals.

If I feel like I still have another ounce of socializing, I’ll go to Duke’s, grab a sandwich and get into whoever is guest DJ’ing. That’s where I can always find a homie or two.

OMG, of course Andrew Combs. I am obsessed with him and don’t know if he knows or if he’s comfortable with my obsession. Either way, I don’t care. He’s incredible. OK, so Andrew Combs, Raul Malo, and then it’s a tie between Kyshona Armstrong and Shannon LaBrie. The twist is I end up demanding four slots, and they’re all invited.

That is not an easy choice, but I will say the Basement East because Mike and Dave are my actual family. They have never stopped believing in me, my mind, or what I do, and I will only ever give them that support back times 1,000. That being said, I’m happy wherever I’m doing my thing. The owners, staffs, marketing folks and buyers all over this city have been good to us.

I wish Adrian Young would move here, open a studio and hire me year-round to hang out with him. He’s a genius and I feel like I would never stop learning from him.

I HAVE NO FUCKING IDEA! Every day I wake up and decide something else is interesting or inspiring or engaging. I welcome that feeling. I’m down for whatever!

← 11 Questions to a Nashville Musician: Amy Stroup
Little Steven & the Disciples of Soul @ CMA Theatre at the Country Music Hall of Fame and Museum / Nashville TN / May 15, 2018 →