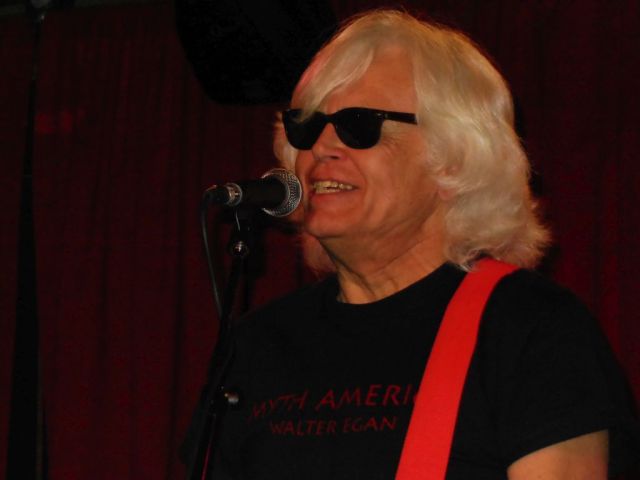 Of all the musicians that have found their way to live here in Music City, few have as many incredible tales to tell as Walter Egan. Starting out in teenage bands like Long Island’s The Malibooz, Egan later had a successful solo career in the 70s under the tutelage and friendship of the folks in Fleetwood Mac. His peak was a top ten hit with the perennial radio and movie soundtrack fave, “Magnet and Steel.” With songs like “Only the Lucky” and “When I Get My Wheels,’ Egan also deserves a place in the Power Pop Hall of Fame. He’s even had a song (“Hot Summer Nights”) sampled by Eminem.

I always knew that Gram Parsons met Emmylou Harris in a club in Washington DC, but never knew that it was in Walter’s kitchen later that same night that they first sang together. Egan’s song “Hearts on Fire” (that he recently performed with Emmylou and The Long Players here in Nashville) also made it to Gram’s final LP. While Walter has continued to produce great pop records, along the way he has also found time to channel his country-rock side through his band the Brooklyn Cowboys.

There’s a new pop record from Walter Egan that just dropped and some upcoming shows that you can read about below. So, here’s 11 Questions to my favorite musician living in my hometown of Franklin.

I was born in a part of Queens called Jamaica, and I grew up in Forest Hills, known for such luminaries as Jimmy Breslin, Leslie West, Michael Landon, Paul Simon (and Garfunkel) Joey Ramone and many more. Growing up in the New York City area meant that I got to be exposed to all sorts of great music, and I got to see the Beatles three times. Some twenty-five years later, in 1991, I inherited that house and moved my family (at that time my wife Tammy and six-year old son Walter) back to Forest Hills.  I love New York but it is a tough place to struggle, and by 1995 I was looking into moving back to LA or checking out Nashville. My friends who knew assured me that I would be embraced by the country world in that much of my albums could be countrified with a fiddle and a pedal steel. I visited four times and by 1997 I was ready to go for it. I liked the fact that songwriters were held in some regard here, and I was tired of making so many phone calls to secure gigs in NYC; to each band member a few times and to the club owners. It was during my stay in New York that “Magnet and Steel” started getting used in films (The Night We Never Met with Matthew Broderick). We wound up in Franklin due mostly to my old friend and bandmate Robb Strandlund being here. Robb wrote half of “Already Gone” by the Eagles and had been here in Nashville for some thirteen years. He thought it was a great place to raise children and to live a less stressful existence. I agreed and as of November 1997, we were ensconced in our little home on Old Hillsboro, looking forward to our new life in Tennessee.

Wow, the first albums I bought at the same time: 50,000,000 Elvis Fans Can’t Be Wrong – Elvis’ Gold Records Volume 2 and Bill Haley and the Comets Rock ‘n Roll Stage Show, which was not at all live as you’d think, really just a studio recording. First single was “All Shook Up.” I bought them at a little hole-in-the-wall record shop in Woodhaven New York, where the proprietor was a jazz-beatnik in a cardigan sweater sporting a goatee. You got to play the disc before you bought it. They were of course on vinyl. Last record I bought (single) was “Levitate” by The Palms, a very cool new group, and last album was Lust for Life by Lana Del Rey. I like her very much, great voice, great melodies and despite the cursory adjectives some interesting lyrical essays…they were digital downloads. Oh yeah, and I also just bought my new album, True Songs 🙂

First real concert was the Kingston Trio at Forest Hills Stadium, in 1962. That show really planted and watered the seed of my wanting to get a guitar the next birthday. I loved their harmonies and their humor. I loved the way Dave Guard played and sang. Flash forward and I am the one who introduced John Stewart to Lindsey Buckingham, leading to his hit “Gold”. Other than seeing the headliners of the shows I’ve opened for, the last concert I saw was either Balance and Composure, or Stevie Nicks and Chrissie Hynde. B&C are a newish band that features three guitar players and have interesting lyrics. I like the singer too. Saw them at the Mercy Lounge in Nashville. Saw Stevie and Chrissie at the Bridgestone and got to visit a bit with my old friend and inspiration (and producer).

Gram Parsons, but that list is a joke…Kid Rock??

At this time, the best pizza in Nashville is Two Boots on Broadway. Anytime I’m in proximity I will stop by for a few slices. Just exquisite crust…mmm. When I lived in NYC in the 90s I played and ate at the Two Boots in Brooklyn. Recently I discovered a great place here in Franklin TN called Brooklyn Brothers on new Highway 96. Very New Yorky. I do not get coffee. As a youth, I had to take out the garbage and the smell of the coffee grounds was not a pleasant one for me. When I was still “on the bottle” as a toddler, me and my twin-cousin Jim were given tea in our bottles. And once weened I went right to Coca Cola, and in soft drink world I remain. I am fairly upset that Coke has “re-formulated” Coke Zero–it now tastes bland and not so attractive to me anymore.

It’s something I used to do, eating late after a show, much more in the old, younger days. Nowadays, I always regret it so I will always eat light…however, if I do it’d be Two Boots of course.

That’s kind of tough to say there are so many, but I would say Joy Lynn White, Beth Sass and Jaime Kyle. I have always liked female singer songwriters all the way back to Joni Mitchell. Joy is probably my oldest friend (I don’t mean she’s old, but that I’ve known her the longest) and she and I have written some really good tunes together. She was also on Columbia Records, though a few years after I. Beth comes to Nashville from the northeast as do I. I met her when her daughter was in my songwriting class. She’s a cult favorite in Boston, and you can find her music on many platforms. We’ve written ten fabulous songs in the last couple of years. Jaime Kyle is one-third of the Classic American Hitmakers, a trio consisting of Dave Jenkins of Pablo Cruise and yours truly. She wrote Faith Hill’s first hit “Wild One” as well as “Stranded” which was a hit for Heart. That would be a fun evening in the famous club.

I like the Bluebird for the solo acoustic gigs. They provide an atmosphere where quiet songs can really be heard, and as a writer you get the respect that is too often not there for you. Although generally Nashville is a place where we writers get that. My favorite for band playing is Kimbro’s Pickin’ Parlor in Franklin. It’s a cozy place that has pretty much been my home town base. Their food is also said to be good. (I can’t eat before a show and as we learned earlier I rarely eat after a show anymore.) My current band, the New Alternatives consists of Rick Lonow on drums and Supe Granda on bass. Rick has been playing with Poco lately, and Supe, when he’s not doing his solo stuff, is the original bassist for the Ozark Mountain Daredevils.

Bass player for The Malibooz, David Chamberlain. He played in many great bands including the Heaters, Bruce Willis’ band.

I thought you’d never ask. I have just this week released my tenth (or eleventh, depends how you’re counting) album, True Songs. It is available everywhere in the cyberspace. iTunes, CDBaby, etc. I have never stopped writing and recording my songs. This batch I’m particularly proud of. I did the record with world class drummer Ron Krasinski, and his beat that can’t be beat. There are some topical songs, some love songs and some heartache songs…it’s not a country album. It’s melodic with interesting clever lyrics, good hooks and interesting subject matter. #rockpopfolkcountry (a little). I am starting to promote it at Kimbro’s September 2; at the Bluebird September 20; and at McCabe’s in Santa Monica on October 14.