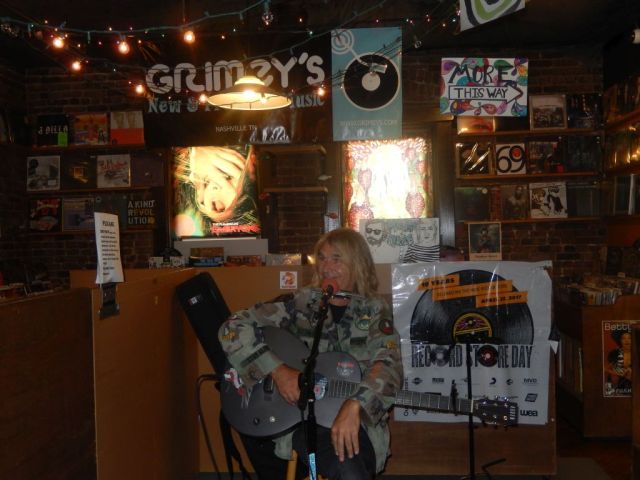 I’m not sure if Mike Peters makes the most out of every city like he did on his recent visit to Music City. Prior to an evening show at the City Winery with his band The Alarm, Mike, along with his wife and bandmate Jules, spent time down on lower Broadway where Jules scored a cool cowboy hat and Mike made an appearance on internet radio show The Vinyl Lunch with Tim Hibbs.

The day also included a return visit to the vintage record booth at Jack White’s Third Man Records where Peters cut a solo 30th anniversary recording of The Alarm’s “Rain in the Summertime” directly to disk. Back in 2013 while touring as lead singer for Bog Country, Mike spent an afternoon in the same booth cutting 30 copies of “Sixty-Eight Guns” to honor its similar occasion.

But, there were still more doings before The Alarm took the Winery stage when Mike and Jules made an afternoon in-store appearance at Grimey’s record store.

Since my fan rebirth after seeing the Alarm this past May in London, I highly anticipated tonight’s show. The bonus of the in-store presented an exciting opportunity to meet Mike and Jules, and arriving early, my wish came true. What an honor and joy it was to meet this delightful and dynamic couple.

After mingling with fans, including store-founder, Mike Grimes, Peters and his acoustic guitar manned their position promptly at 5pm on a chair in front of the modest-sized crowd. Mike made it clear from the start that the afternoon’s destiny was entirely in our hands when he announced his welcoming of both song requests and questions.

The 30-minutes that followed turned out to be a pleasant mixture of both: four song requests and several great questions. These led to entertaining stories about Queen’s Freddie Mercury, cutting songs in Jack White’s record booth, and of course, the “45 RPM” con that The Alarm pulled off on the record industry.

After playing “45 RPM,” Mike was joyfully surprised when a young fan requested another more recent song, “Right Back Where I Started From.” This song also came from the Poppy Fields project that masterminded the great ploy of hiding the “over-the-hill” Alarm behind the guise of a fake young band that got the media’s attention and actually produced a hit!

As a singer, Mike hasn’t lost a thing, and he still sounds like the kid whose voice 30-years ago, reminded us how rock music can instill passion in our spirit. Fittingly, Mike and Jule’s cancer charity is called “Love, Hope, Strength,” and in so many ways these words sum up what the man and his music are all about.

There is no doubt that Mike Peters was, is, and will always be a rock star. But, in addition to all the charisma he displays on stage in front of an audience, inside him is a heart full of compassion and an unbounding love for life. He was also blessed to have a wife who shares these same qualities. 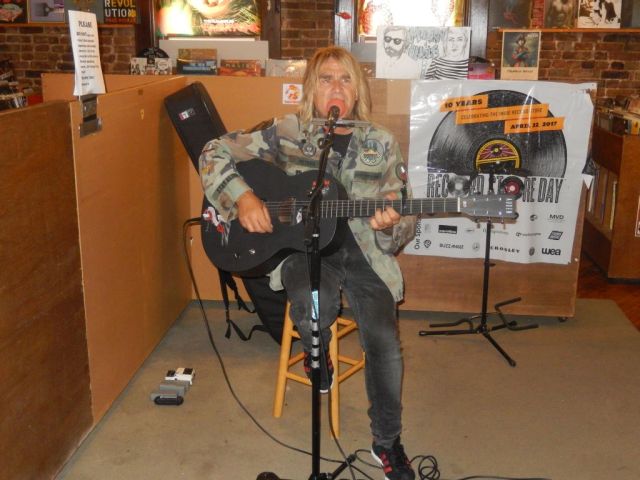 The evening then moved over to the Winery where at 6:30pm, concert patrons ate dinner and drank wine over a screening of the documentary about Mike, Man in the Camo Jacket. The tireless Peters even did a 15-minute Q&A before the band finally took the stage at 8:15 for a two-hour show. More on that later!