Not only do I go back a long way with the music of Steve Earle, but he and I have both lived in the same three metropolitan areas: San Antonio, Nashville and New York City. This gives me a hometown familiarity with his local lyrical references about places like the “speed trap up ahead in Selma town,” “Lewis Street (where the devil lives)” and “the corner of Bleecker and Carmine.”

However, our lives have been as different as some of our political viewpoints. But I have always found it easy to listen to him espouse his opinions since has always does so in a well thought out and respectful manner.

Throughout his thirty-plus year career, I have also hung with Steve and enjoyed every record, including his latest blues-based long-player Terraplane Blues.

On this first of two nights at the Winery, Steve first appeared to introduce his opening act niece, Emily Earle. His whimsical “Hello Winos” was followed by the sobering admission of how he used to buy crack across the street. Emily, who first made herself known on The Voice a few years ago, followed with a fine acoustic set of endearingly accessible songs, several of which were co-writes with her uncle. She’s worth keeping an ear out for.

Steve then proceeded to commence his 2-hour set with four songs from his new record. His delivery was as captivating as was his highly-engaging didactical dialogue about the blues in between songs. It actually got to where I didn’t know what I wanted to hear more: his songs or his teachings!

After this four new-song start, Steve went into his catalog where he stayed for the night. The fairly diverse set included his two biggest numbers that never seem to grow old: “Copperhead Road” (on guitar and not mandolin) and the closing “Guitar Town.” 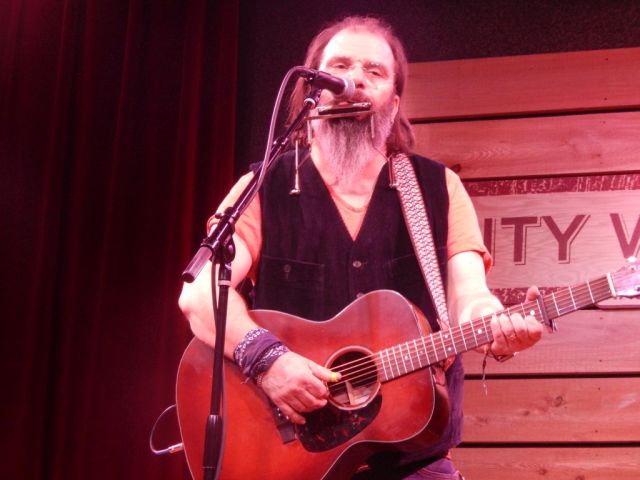 He may have just turned 60, and his voice certainly tired a bit as the evening wore on. But Steve Earle still manages to sing, perform and thankfully continue to create music with the passion of someone making his first record.