Since moving to Nashville several years ago, Detroit-native Jack White has become one of Music City’s most eminent musical ambassadors. He also created the Third Man Records complex which was a catalyst in bringing some life to the City’s south side.

Fans of White and his former band The White Stripes will be familiar with his Third Man Records label whose releases can be highly unusual and mega-collectible. But there is a lot more to Third Man than just liquid-center vinyl pressings and reissues of White Stripe singles.

At the small retail shop, you can of course buy Third Man recordings. But, in addition to White’s catalog, there are the trademark blue-background picture sleeve singles and live 12-inch records of other artists that have all been produced on location. The singles are usually recorded  at the Third Man studio (e.g. Beck, First Aid Kit) while the 12-inches are from concert sessions recorded straight to vinyl in the concert room (e.g. The Shins, Drive-By Truckers). Third Man has a great sounding room for live shows that should be used more than it is. Open to the public, the live events sell out fast and require keeping a watchful eye on the website.

Third Man also offers a collection of souvenirs ranging from the usual (t-shirts) to the unusual (a Lego model of The White Stripes) and lots in between. 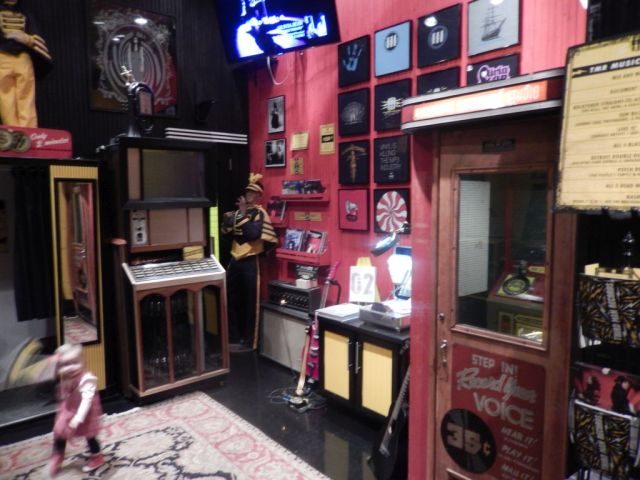 A visit to Third Man should be a treat even for someone who is neither a Jack White fan nor a record junkie. White is a collector of odd contraptions and has filled the retail space with unique artifacts such as an old juke box and a vintage photo booth. There is also a DIY recording booth that Neil Young even used to cut a covers LP.

For me, the biggest surprise was the warm Southern hospitality of the sharp-looking clerks in their yellow and black Third Man uniforms. I was convinced that a place this hip-looking would be as pretentious as a New York Soho fashion shop, but I was wrong. Stop by just to browse, and the folks there will make you feel quite welcome.

P.S. Nashville visitors also should not be surprised to see Jack White out in the wild. He gets around town quite often obviously enjoying the undisturbed freedom offered to him by locals. If you must, ask around and someone will point you to his house which is well worth a peek through its tall gates from the street.