Before Demonbruen Street at the end of Music Row became a row of swanky bars, it was home to several cheesy museum / gift shops for famous country artists. The Johnny Cash Museum which opened in 2014 just off Lower Broadway is a stark contrast to everything that was wrong about those earlier places. It is a world class museum that should be on everyone’s list of must things to do in Music City—tourists and locals alike.

The $15 price tag is a bargain to see all of the amazing Cash mementos on display. The owner of the museum was an acquaintance of “Big John” and obtained many of these items directly from him. Additionally there are many other wonderful pieces on loan from fans as well as the Cash family. I myself suffered from over-stimulation, and had to pace myself during my visit. 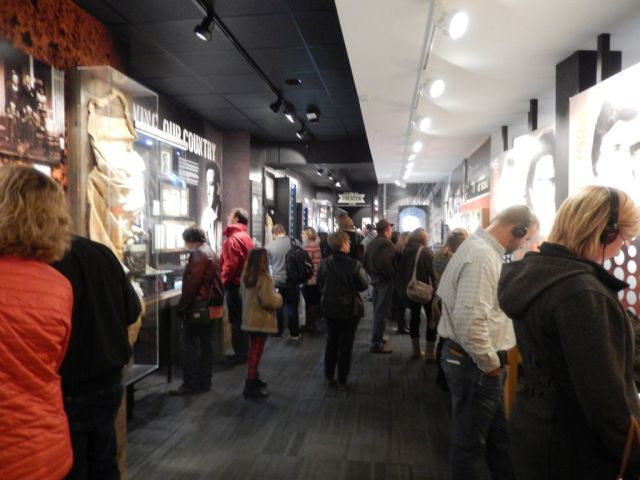 There are many great priceless items on display including posters, photos, clothing, album covers, singles, gold record awards (“Presented to Johnny Cash”), Grammies and Cash’s Rock and Roll Hall of Fame induction statuette. There’s also much music to hear and videos to see. (I never get tired of seeing Johnny singing “Girl from the North Country” with Bob Dylan from his 1969 television show which I was able to call up and watch on demand.)

The special Legends of Sun Records exhibit was an added bonus and featured Carl Perkin’s blue suede shoes, Roy Orbison’s glasses and a hip shirt once worn by Elvis.

Do yourself a favor and visit this place honoring a true American icon. You will be quite impressed by its professionalism.

Hatch Show Print fans will want to grab both the Museum and special Legends of Sun Records prints for their collections.