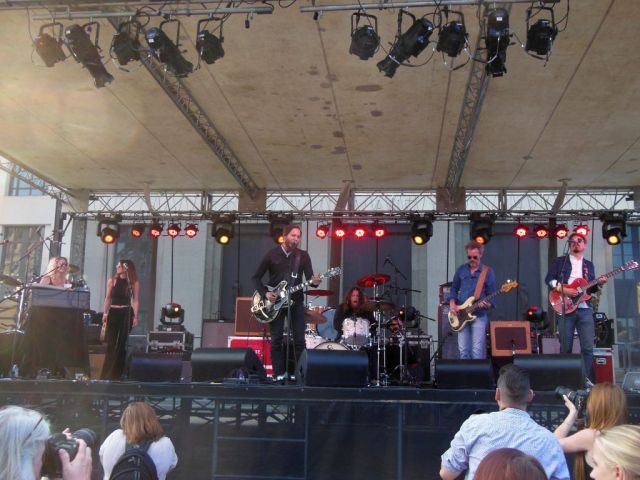 Radio station Lightning 100 recently kicked off the sixth season of its free Live on the Green concert series downtown in front of the Courthouse. Music City Mike set his sights on seeing Spanish Gold, the first of three bands to take the stage for the opening week. I was eager to see them after catching a few of their songs at the recent Forecastle Festival in Louisville. My early arrival enabled me to secure some prime real estate in front of the stage prior to their 6pm start before things got too crowded.

The core trio of Spanish Gold is loosely billed as a “super group.” In fact, lead singer and current Nashvillian, Dante Schwebel, did double duty this night earning a second paycheck by later playing lead guitar for the headliners, City and Colour. But perhaps the most familiar face to the local crowd was drummer Patrick Hallahan from the ever-popular My Morning Jacket. To round out the band, Adrian Quesada (formerly from Grupo Fantasma) serves well on lead guitar for the Gold. The trio was augmented by a bass player and two female backup singers.

Spanish Gold played an enjoyable set that included eight of the eleven songs from their debut LP, South of Nowhere. A bonus was their groove-driven cover of a 1971 tune by a Latin soul group from The Bronx that they released as a single this past Record Store Day.

Spanish Gold has a steady solid rock sound that makes you think you are listening to a fuller-sounding Black Keys. I guess it fits that some of their record was recorded here in Music City at Dan Auerbach’s studio.

After the 50-minute set was over, I was gobsmacked by the large crowd that had gathered behind me. Fighting my way back through the massive crowd, I retreated for a slice of pizza at Joey’s on Wheels before making my planned early exit. Dealing with large crowds of mostly disinterested people is just not my favorite way to enjoy live music. As I’ve said before, I generally stay away from concerts that you can bring your dog to! But congrats and thanks nonetheless to Lightning 100 for hosting such a successful event.

See the Nashville Scene blog for details about the rest of the evening.