The Joint in the Woods was just that: a plain shed-like building hidden in a North Central Jersey forest. It was one of the first music venues I recall visiting that had few seats requiring most everyone to standup general admission style.

For a place out in the middle of nowhere (about 30 miles due west of New York City) the club did present an impressive roster of acts during its short tenure. In 1974, I saw shows there by 10cc, Electric Light Orchestra and Renaissance before seeing this one featuring T. Rex. Earlier in the year, I made the mistake of missing Springsteen at the Joint.

Enthusiastically, I arrived at the club quite early to see T. Rex’s legendary Marc Bolan for the first time. Not only did this enable me to sit at one of the few elevated tables on stage left, but I was able to meet Bolan and his long time girlfriend, Gloria Jones leaving the side stage door after sound check. Here is an autograph from that evening. 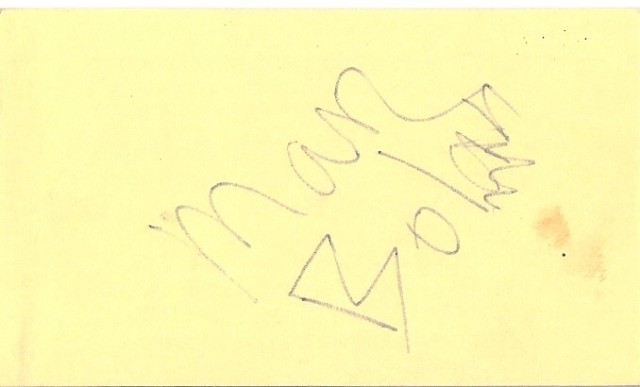 My taste for T. Rex’s music focused on their two popular US records, Electric Warrior (1971) and The Slider (1972). Back then, songs like “Telegram Sam” and “Metal Guru” were heard on Friday afternoons during DJ Scott Muni’s “Things from England” segment on WNEW-FM.  Although Bolan had much more output other than these two discs, little else seemed to catch neither my attention nor most of the American audience for that matter. By the time of this show, his US stardom had pretty much faded.

My memories of the show are feint although I do remember Bolan doing his routine of making love to his guitar.

Bolan tragically died three years later in an auto accident as a passenger in a car driven by Jones who survived the crash. He was 29.