The name of legendary songwriter and record producer Richard Gottehrer doesn’t turn up as often as it once did. This is understandable given that the producer of the debut records by Blondie and The Go-Go’s is now 74. However, the one project to which he still adds his magic touch is managing and producing the Dum Dum Girls.

Recently, the Girls (plus a guy on lead guitar) were in town for an evening show at the Exit/Inn. Earlier that day, they paid a visit to Grimey’s for a noon in-store appearance. Although not a full house, there were about fifty or so who came on their lunch hour to see the band.

Although they were all plugged in electric, the short set was a quieter affair than usual to accommodate the small space of the record store. Feeling like she was somehow letting us down, lead singer Dee Dee told us to come see them tonight when they would be “playing louder.” But, on the contrary I found the sound of her lush vocals way up front in the mix quite refreshing. 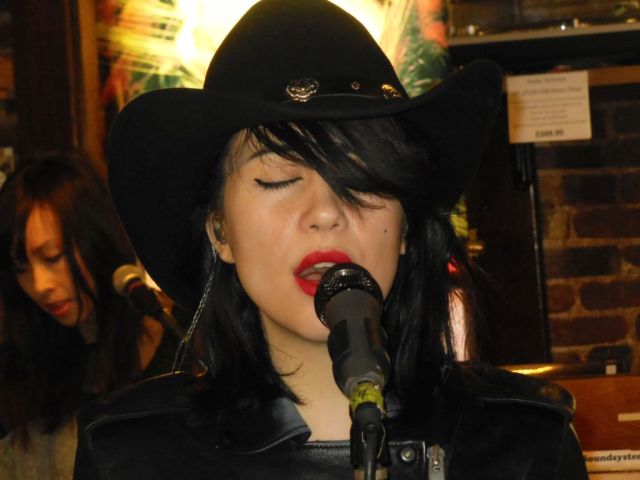 The set included three songs off their latest record, Two True, including the song getting recent radio play, “Rimbaud Eyes.”  With their great look and sound, these girls would have been big stars back in the MTV days like those other bands Gottehrer produced. Nonetheless, they have made a great new pop record that is well worth checking out.