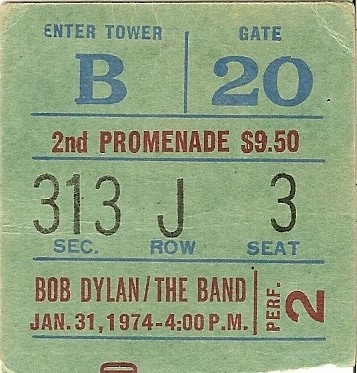 Bob Dylan’s 1974 tour ended a self-imposed, eight-year absence from the road. His much-heralded return was even more special because he chose to bring along his best-known backing band. Formerly known as The Hawks, his supporting players had since become stars in their own right as The Band. It was a given that this would be a tough ticket to come by. The nationwide use of a mail order only lottery process created an even greater challenge. Fortunately, a college friend scored a pair and offered me one.

Midway through the tour, there were three sold-out shows over two days at New York City’s famous Midtown arena which seated 19,500. My chance was a late afternoon matinee show on the second day. A thing of the past, many major acts were given this cost-effective method of squeezing in another show. Most fans either had to miss a class or two like me, or cut out work early to make the 4:00 show time

Just two weeks prior to this show, Dylan released his Planet Waves record on David Geffen’s Asylum Records.  This wound up being only a one album diversion from Columbia Records since he would return to the label a year to the day later with Blood on the Tracks. Although the new record was recorded with his tour mates, this night’s set list included only one of its songs, “Forever Young.”

Looking back at this first time I saw Dylan, it was by far his best show. A simple listen through his live records attests to the fact that in 1974, his voice was still strong and melodic—perhaps at its peak. Likewise, The Band has always served Bob best, and being a big fan of their music, their two brief segments within the show were a huge bonus for me.

Outside of the intensity and brilliance of the performance, I have two memories from this show. First is the surprise of seeing Dylan do the arena rock encore thing by playing his biggest hit, “Blowing in the Wind,” while the lighted disco mirror ball spun. The other is when the continued applause brought him back to the stage:  He was wearing a Toronto Maple Leafs hockey jersey and uttered his only words of the night, “See you next year!” His long absence from the stage surely had everyone doubting his words. Who would have thought back then that he would eventually travel incessantly on what has been called the “Never-Ending Tour?”

The 1974 tour was perfectly documented later that June on the live release Before the Flood. This parting shot to Asylum Records is in my book as one of the greatest live albums of all time.