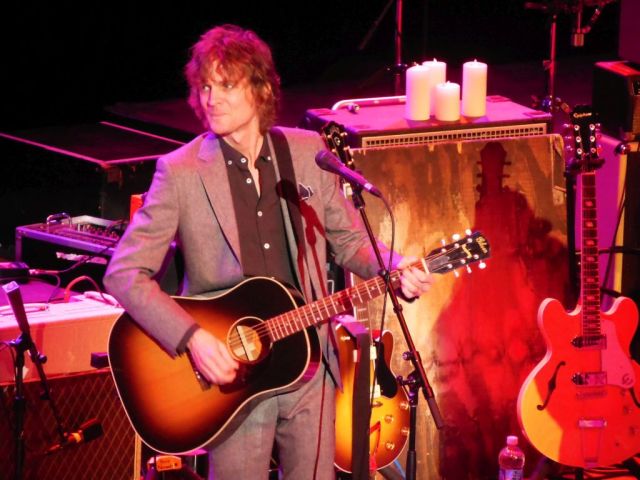 Nashville’s Brendan Benson is a well-respected and talented singer-songwriter whose skills lay in crafting exquisite pop songs. While there are many treasures to find in his solo catalog, he still remains best known as the other singer in The Raconteurs.  The Raconteurs is the band he fronts with Jack White, the musical face of the new non-country Nashville.

Seeing Benson as a Ryman headliner was quite a surprise. It made more sense, however, when the full details revealed that the show was a benefit for the David Lynch Foundation, an organization that promotes the use of Transcendental Meditation (“TM”) to heal traumatic stress. The “friends” part is what got my attention when the long roster of names included Eric Burdon, former lead singer of both The Animals and War. Disappointingly, Burdon’s participation was limited to a letter read by Benson apologizing for Burdon’s last minute cancellation citing exhaustion from a recent European tour.

While we didn’t get to hear Burdon, the night was filled with great entertainment even though it was more Benson-centric than I had expected. In fact, all of the guests simply sang along with Benson on his songs, some of which they had co-written with him.  One exception was underutilized Jakob Dylan with whom he did a Stones cover.

There was a missed opportunity when Benson chose to sing one of his songs fronting the surviving incarnation of Big Star: original drummer Jody Stephens with Jon Auer and Ken Stringfellow from The Posies. I’ll never understand why Benson didn’t take a slight diversion to sing “September Gurls,” the Big Star classic that I have heard him nail at recent tribute shows.

Benson’s banter about fans who came from great distances needed no explanation. It was obvious they were there for some JW and not TM. This was evidenced when Jack White’s entrance as the night’s final guest brought the somewhat subdued house to its feet with cell phone cameras out.

The evening closed with Benson leading two Animals’ songs that were probably rehearsed for Burdon. All in all it was a great night of music if you were a fan of Benson’s music. It was, however, an unexpected use of guest stars–atypical to the usual benefit show format where they would sing their own songs.

Here’s a photo run-down of the set list and guests who supported Benson and his expanded touring band.