With international travel back in my game plan, I recently made my first trip to Ireland. And while my passion for rock music did not influence my itinerary, there were a few unexpected finds worthy of sharing. 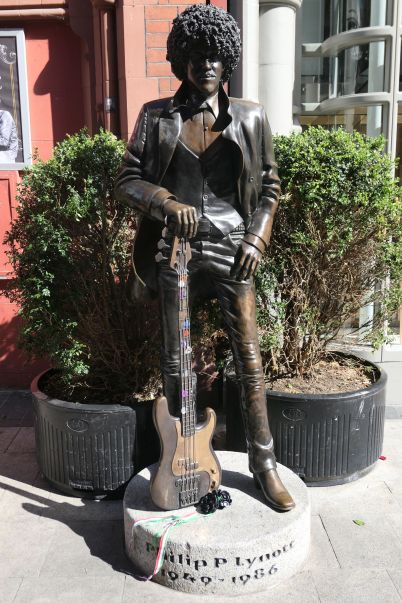 Beginning the journey in Dublin, my arrival city, I did have two destinations on my radar. The first was the statue of Thin Lizzy’s late lead singer and bassist, Phil Lynott. I had made a mental note to look for it when I toured the Grafton Street shopping area and it so happened that I was only a few feet away from it when I did a search for its location on my phone. It’s an excellent rendition of Phil and it seemed that each time I passed it during my stay in Dublin there was a refresh of the trinkets (mostly guitar picks) left at the site.

The other music-related item I had pondered was a visit to the Irish Rock ‘n Roll Museum Experience which is located in the Temple Bar area of Dublin. (BTW there is no one “bar” in this part of town that I was told to avoid since it was priced to take advantage of tourists.) Since I did not book the museum in advance, I had to wait an hour or so for the next available guided tour since that’s they only way they operate.

After grabbing some nearby pizza, I did manage to spot a replica of one of the late Rory Gallagher’s guitars hung on the side of a building where one normally sees the street signs in this part of the world. Like Lizzy, Rory is an artist who I know that I have under-appreciated, especially after getting enlightened on my upcoming museum tour. 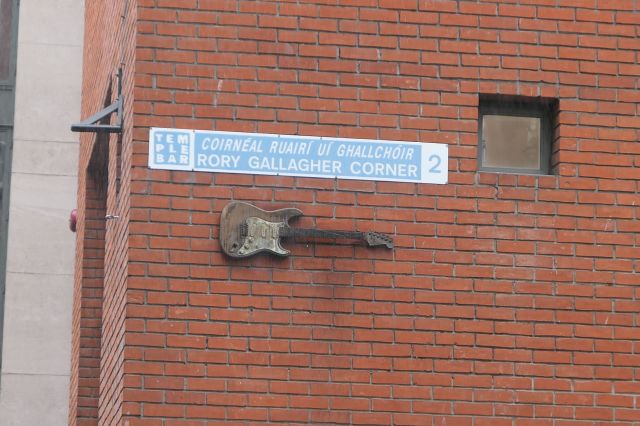 The museum is a multi-use complex that also serves as a rehearsal space, recording studio and music venue (“The Button Factory”). The guided tour started promptly, and our guide was knowledgeable and entertaining. He began by talking us through a wall of LPs by Irish artists starting with Van Morrison’s Them and running through the rest providing brief overviews of each. Along the tour, I saw some great memorabilia in the U2 and Thin Lizzy rooms as well as short film featuring Irish artists. While I knew U2 would be huge in Ireland, I was somewhat surprised by the almost on par adoration for Thin (locally pronounced “tin”) Lizzy. 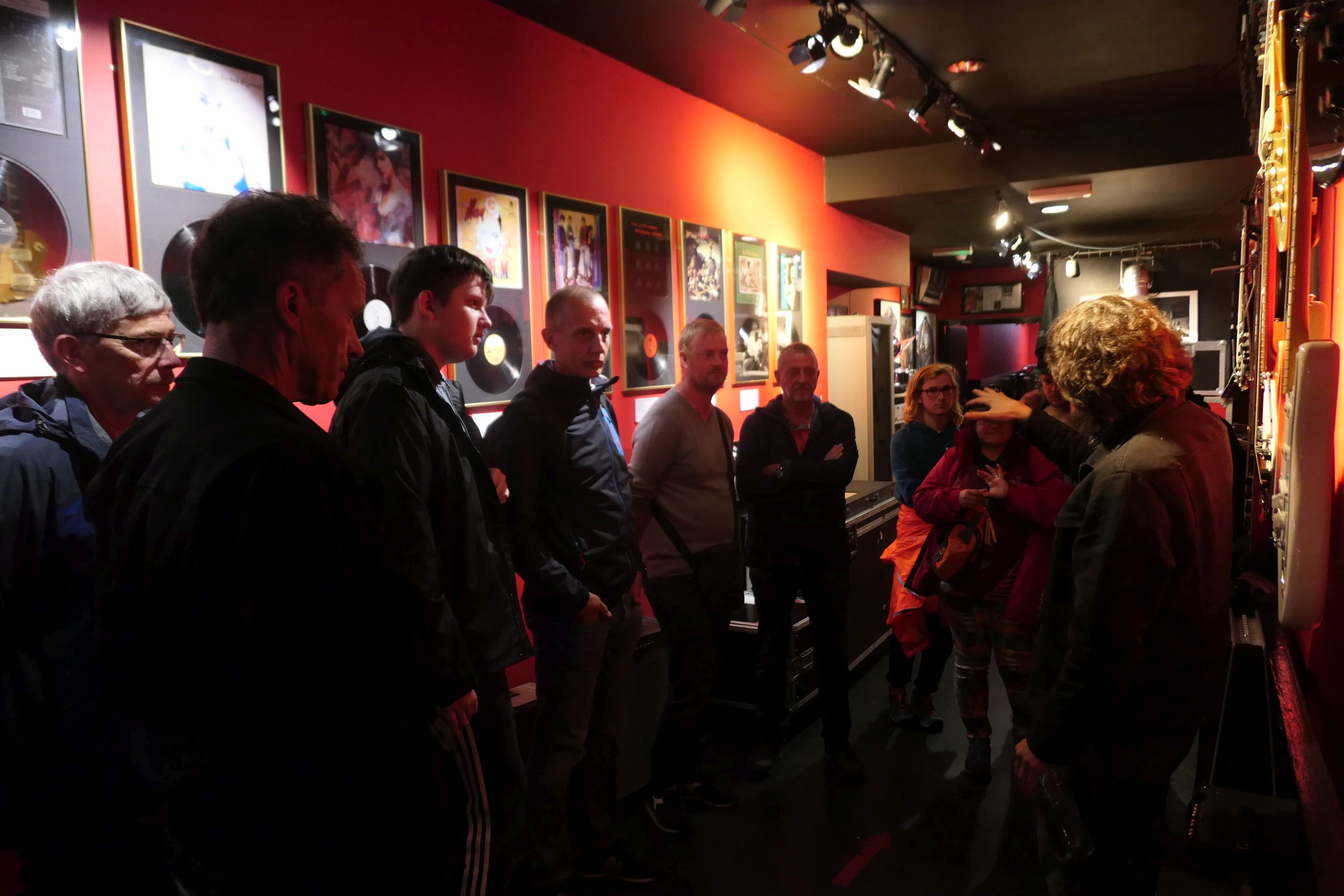 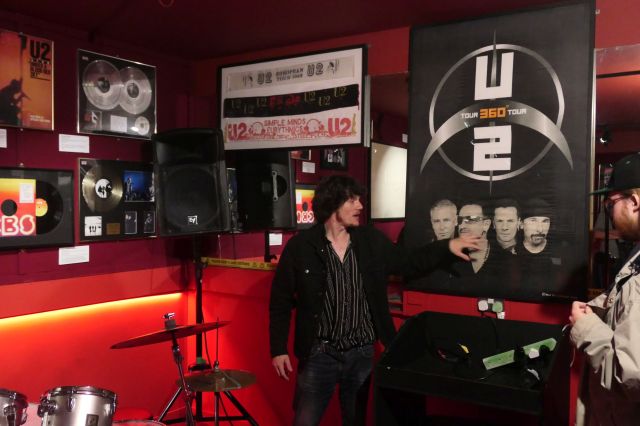 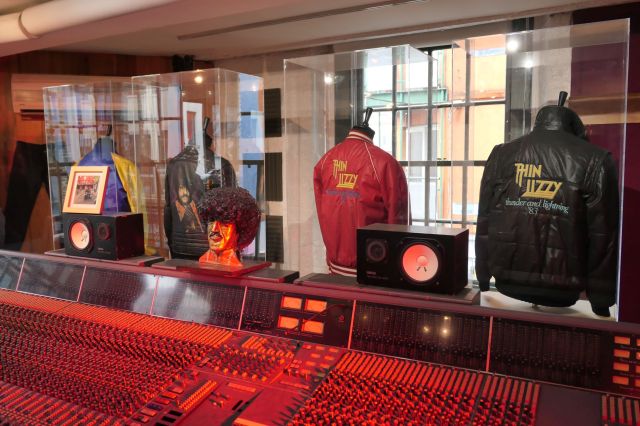 I left the tour wishing I were home and able to pull out some records to listen to more Boomtown Rats, Pogues, Van Morrison and Undertones! I give the Irish Rock ‘n Roll Museum Experience two thumbs up and say that it’s a must if you are in Dublin. 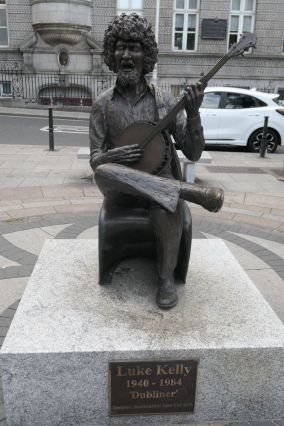 The only other item of interest I spotted in Dublin proper was a remarkably made statue of Luke Kelly of The Dubliners. The detailed handiwork on this piece was possibly the best I have ever seen for such a work.

During my stay, we also saw the hotel that Bono owns and, on a trip, south to swanky Dalkey, we also got to see the giant shrubbery in front of the gate to the house where Van the Man once lived. Both of these were accidental and are not recommend for your vacation planning!

While in Dublin, I also took a tour of the Wicklow Mountains where we stopped to view from above, the Luggula Estate which was once owned by the Guinness family. It was there that I saw the gravesite and heard our guide tell the story of the young London-based socialite and heir to the Guinness Fortune, Tara Browne. The news of his death on December 18, 1966, was said to have been read by John Lennon in the newspaper the morning after and became the inspiration for the opening lines of “A Day in the Life.” Yes, Browne, who was also a friend of Lennon, was the one who “blew his mind out in a car.” The gazebo-like structure in the photo bellow is his grave marker.

Finally, I also travelled to Dingle on the southwest coast and Dunleary (Dún Laoghaire) on the eastern coast just south of Dublin. Both proved to be great places to hear locals play traditional Irish music in the pubs while you drink your Guinness. The hard part though for me was that most music started at 9pm which was often past my jetlag-induced early bedtime. Also, be warned that nothing is punctual in Ireland.

Ireland is a wonderful country to visit. The scenery is breathtaking, the food is amazing, and the people are the nicest you will ever meet. There also have been many great Irish musicians with a great tradition behind it.

Have a listen to this video I shot of two local players at Foxy John’s pub in Dingle!