A Squeeze Sojourn Through Blackheath and Greenwich

My annual trip to London would not be complete without a visual exploration of the history behind one of my favorite musical artists. For my fourth such adventure, this year’s subject was an easy choice after  hearing Janice Long’s BBC Radio 2 program “A Long Walk With….” featuring Chris Difford of Squeeze. Listening and viewing the accompanying photos, this overly-delightful listen wet my appetite to see the sites first hand.

With a musical mate of mine along for the ride, we carefully mapped out our Friday morning journey. Our thanks go out to Ms. Long for her notes (since the audio of this show is no longer available) and a friend of ours who did some helpful advance reconnaissance. One thing we were not thankful for however was the rain which nearly cancelled the affair. However, we pushed our way through and before every location was checked off our list, our umbrellas were packed away.

I will spare some of the specific details which are best left to be told by Chris himself in his must-read autobiography, Some Fantastic Place: My Life In and Out of Squeeze. I will however try to give you some feel for what we saw in addition to captioning my photos. In all, what I left with was some sense of the reality behind how a young Chris Difford met a young Glenn Tilbrook to create one of the greatest songwriting partnerships and best bands that England has ever produced.

The starting point was Blackheath Village which is a short ride aboard the National Rail from London Charring Cross Station. After a quick breakfast in the quaint and quiet downtown center, we started at the pub where Chris and Glenn first met. Today it is called O’Neills while back then it was The Three Tuns. 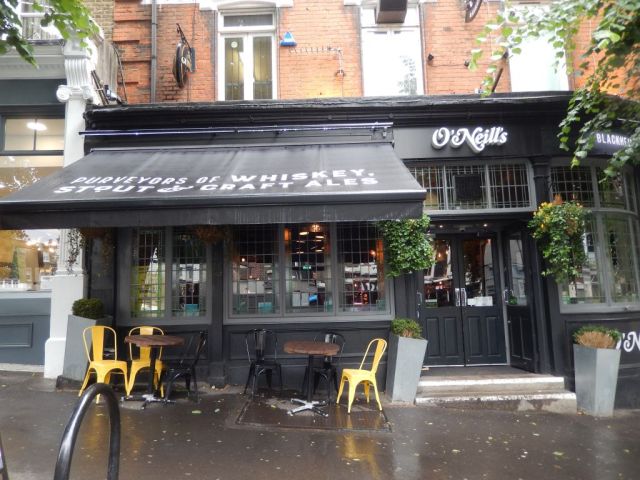 Sitting outside the O’Neills, there across the main street stood a row of storefronts, one of which was the legendary sweet shop window where Chris placed the advert that led to his meeting Glenn. Unfortunately, the shop is no longer there, and we were also unaware of its precise location.

Still looking across the street, to the right of the storefronts sits another pub, The Crown, where Chris and Glenn both spent much time alone and together. Venturing inside, we inquired and as we expected, were told that the current interior has been since completely remodeled.

A short walk away from The Crown, up a street called Tranquil Vale, was Lindsey House. This spacious and stately brick building was the home where young Glenn lived with his girlfriend Maxine and her parents. Seeing the proximity of the home to the sweet shop gave a mental picture of how a short stroll down the hill would lead to seeing the window advert that launched Glenn’s life-changing musical marriage. Lindsey House is also where Chris and Glenn wrote their first songs together.

Across the way was an enormously-wide expanse of green space. Cutting across this open area, we headed towards Difford’s childhood home on Combe Avenue. Imaginations this time had us visioning Chris crossing this space in the opposite direction to visit the Village. There, the center of his then universe, held his hope of finding some musical partners.

Like Lindsey House, the house on Combe Avenue looked much like it did some forty-plus years ago. Located in a rather large complex of similar units, it was quite a modest contrast to Glenn and Maxine’s over-sized living quarters. Seeing #98 where Chris grew up, I couldn’t help noticing the same yellow color on the front door that appears on the cover of his recent autobiography and the companion CD Let’s Be Combe Avenue Demos, 1972. Likely just a coincidence, but nonetheless a connection.

Leaving Blackheath, we then took the longest part of our walking journey to nearby Greenwich. In addition to its fame as the location of zero degrees longitude, it is also the site of Chris’s first home. Here is a picture of where his house once stood, having since been completely replaced by a new development years ago.

Not a fan of visiting sites of where things used to be, this one however was special because of the name of the street where it stands. I bet you want to go listen to the song right now!

Well, this concludes a tour that in addition to satisfying my rock music nerdom, also allowed me to see parts of England that I would never see otherwise. Squeeze will forever be one of my favorite bands, and it was a treat to have added this historical background to my love of their music.