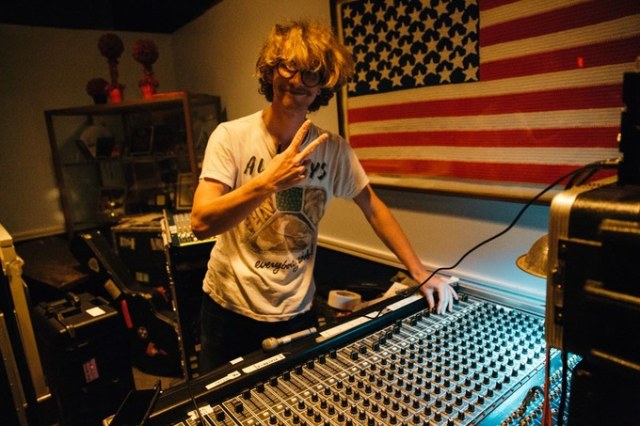 Earlier in this young century, several great bands came out of Belmont University. Sadly, some acts that did like the Kopecky Family Band and Apache Relay are no more. One Belmont musician who was somewhat under the local radar (except perhaps for starting Diarrhea Planet) was Evan P. Donahue. Having drifted away from the recording scene, Evan is thankfully on his way back. Since graduating from Belmont with a degree in Audio Engineering, Donahue has had a successful career working the boards as a live sound engineering for some old friends and big Music City names.

Evan has just successfully completed a Kickstarter campaign to fund “Page of Wands,” his third full-length LP. It’ll be a “cool green vinyl” LP pressed at Third Man Pressing. Unfortunately, it’s too late to secure a pledge copy, however, you can drool and learn more about it right here!

I connected with Evan’s pop-rock sound after noticing that he resembled a young Elvis Costello and then hearing songs he wrote that reminded me of Paul Westerberg. His 2010 LP “Rhythm and Amplitude” is a true gem that you too can learn to love at Bandcamp.

Its been a big thrill to reconnect with Evan. Watch for “Page of Wands” in September. All those who pledged will be invited to a Nashville Celebration show in November, and maybe he’ll let a few more of us in. Thanks Evan for your eleven!

Bay Area California, then New York when I was ten. I moved to Nashville to pursue a major in Audio Engineering when I was eighteen. I wanted to be involved in the creation of music in any way I could.

First music I remember buying was “Sometimes” by Britney Spears, just the single on compact disc. The last record I bought was Give Me My Flowers, a compilation of 50s and 60s Gospel recordings from Nashville TN. It was a 12-inch vinyl record.

First concert, oh man, that would have to be something like The Nutcracker, does that count? The last concert I saw was Sunn O))) at the Rockefeller Memorial Chapel in Hyde Park Chicago on Good Friday. I don’t really get out too much.

I’m working on completing a record called Page of Wands and continuing to tour as a live sound engineer. Please check out some demos and rough mixes at:  https://evanpdonohue.bandcamp.com/album/for-promotional-use-only