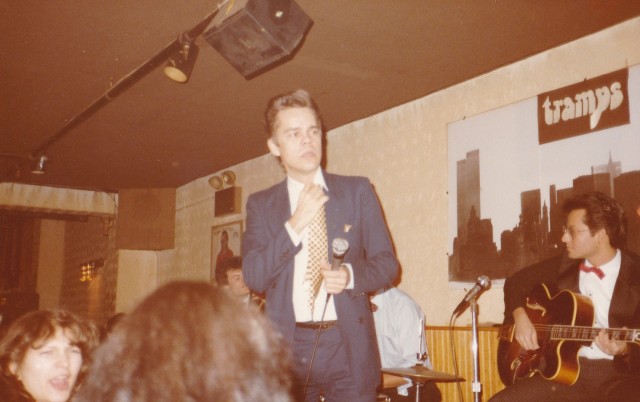 Labelled by its progenitor as a show that was meant to only play New York City, David Johansen first brought his musical alter ego, Buster Poindexter, to his city’s attention at Tramps. This 150-seat music club on 15th Street would later become a vital venue for larger shows after moving to a much bigger space on 21st Street until its closing in 1999.

But, on this 1984 night, I saw my first Poindexter show at which these photos were taken by my old Texas friend Dean Pantzar. For many evenings in the mid-80s, Buster was frequently a denizen to this small cozy room for two sets of his wonderfully-entertaining amalgamation of blues, jazz, rock, lounge or whatever. Buster, a self-proclaimed “ethnomusicologist” had a knack for finding the perfect songs to fit his sincere and sophisticated but unmistakably tongue-in-cheek style.

From his heavy-sprayed and perfect pompadour to his black patent-leather loafers, the always in a sharp suit or a tuxedo Poindexter cut a striking image in this new nightclub persona. And, although he never came out of character, fans saw in Poindexter what made them love Johansen as a live performer with both the New York Dolls and as a solo artist. That same strong deep voice, a command of the stage, and the ability to make the room his own intimate fun house. But, most of all, it’s that face and the way he can emote so much feeling through his expressions. 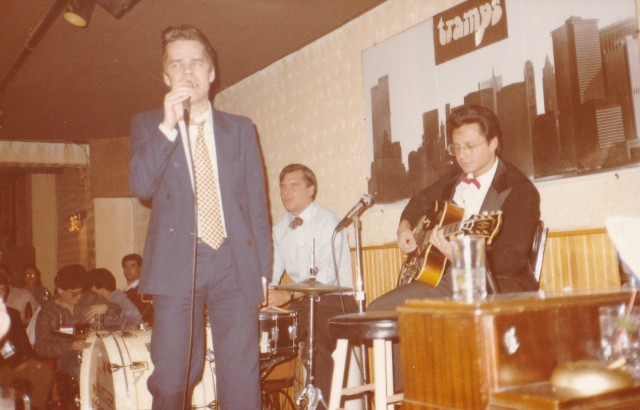 At the Tramps’ shows, Buster’s Banshees of Blue backing band were usually limited to guitar, keyboards, bass and drums. He sang from a stool, occasionally indulging a harmonica and almost always nursing a martini. Word of mouth grew, and Buster Poindexter became a must-see show when one was in Manhattan. This included guest musicians as well such as the night in February 1984 when both Keith Richards and Delbert McClinton sat in with the band.

While Buster’s legend had him hailing from Bogalusa, Louisiana, the songs came from all over the place. Many were from the 40s and 50s. It was as if he found a box of dusty old records lying in a closet somewhere. He covered many different songs, and they included the humorous as well as the serious.

Frivolous mainstays included R&B classics such as “Who Threw the Whiskey in the Well,” “Good Morning Judge” and “Big Fat Mama’s Are Back in Style Again.” All these songs gave the audience the chance to joyfully yell along with the choruses.

One of my early favorites was Buster’s update of Count Basie’s “Did You See Jackie Robinson Hit That Ball.” He made the lyrics current by replacing the Brooklyn Dodger’s Robinson with the then New York Met’s star outfielder whose name had the same number of syllables, Daryl Strawberry.

But, Buster was equally at home with a tender love song such as Lulu’s “Oh Me Oh My (I’m a Fool for You Baby)” or jazz classics like Jimmy Van Heusen’s “Deep in a Dream” or Billy Strayhorn’s “Lush Life.”  Watch David light a flame to the 60s Lulu classic from his perch atop the piano in this great video. He also loved to proclaim his love for the City with “New York’s My Home,” a song made popular by Sammy Davis, Jr.

Buster Poindexter was a lounge singer extraordinaire. More than just a mere entertainer, he was this character that you couldn’t help but love. The New Yorker above all New Yorkers, he welcomed you into his world where everything was hip and cool. He was your guide and taught you about dignified drinks like the Pimm’s Cup and hangover tricks like the “Detroit Eye Tuck” method of using Preparation H under the eyes. During The Coasters’ “Shopping for Clothes,” he showed us “Palmer House-ing,” the way they danced at the classy Chicago Hotel. For those 90 minutes, he made us all want to be a part of his glamorous world.

In between songs were often-repeated stories that generally centered around his alcohol-fueled show business lifestyle. The best of these stories, one about his attempt at working Broadway, is thankfully preserved through this clip from his appearance with the late Johnny Carson on The Tonight Show.

The Buster Poindexter show’s success eventually expanded it to the larger confines of The Bottom Line down on 3rd Street. At its peak, you could count on a handful of shows every month, and almost every Bottom Line show saw a celebrity or two sitting at one of the three reserved center tables 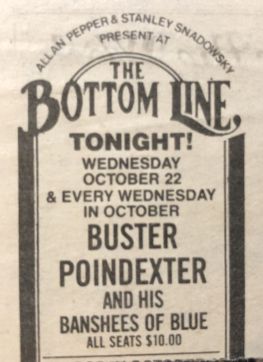 When the show began to blossom at The Bottom Line, along with it came the unexpected surprise of a hit song for Poindexter and the Banshees. The showstopper every night soon became their cover of Soca singer Arrow’s “Hot, Hot, Hot.” The Banshees, which now included a female singer/violinist (Soozie Tyrell Kirschner who would later join Springsteen’s E Street Band), the fabulous Uptown Horns and a conga drummer, would all liven up the song by cavorting through the club on a conga line. The success of this song lead to its release as a single, an MTV video and its performance at just about every wedding in the late 80s! Here’s a lively version that although mimed, features the full Banshees Bottom Line band.

For a show chock full of cover songs, the Bottom Line shows would kick off with the whimsical Johansen original “Cannibal” – a spirited mood-setter to say the least! Try sitting still during this rollicking version from the Carson appearance. Of course, drinking songs were quite familiar to the set and one comic original was Johansen’s “The Worst Beer That I’ve Ever Had.”

Soozie’s appearances with Buster became a big part of the set. She was even given a moment alone in the spotlight for her exquisite cover of June Christy’s “Something Cool.” She and Buster also did a rave-up duet on the classic “Hit the Road Jack,” and her violin was also the musical palette for Buster’s touching rendition of his show-closing “Heart of Gold,” a song from an earlier Johansen solo record. Watch Soozie tell Buster to “Hit the Road” on Jay Leno back in the day.

The other Banshees were quite notable themselves. Drummer Tony Machine, guitarist Brian Koonin and keyboardist and “musical dictator,” “Crazy” Joe Delia, all had prior experience with David, either in late incarnations of the Dolls or in his solo work. The mainstay on bass was Tony “Antoine Fats” Garnier who would later become, and still is to this day, the tenured bass player for Bob Dylan’s Never Ending Tour. Also, Soozie is not the only Banshee to make it to E Street since Delia’s occasional backup on the keys, Charlie Giordano, also now plays with the Boss.

In 1986, Buster’s New York notoriety got him a gig as a regular featured singer with the Saturday Night Live band, leading to several appearances that season. Most famous was a holiday duet of “Baby It’s Cold Outside” with actress Sigourney Weaver. In the years that followed, Johansen’s talents were also noticed by Hollywood, and he landed a few supporting roles in major motion pictures such as Scrooged with Bill Murray and Let It Ride with Richard Dreyfuss. There were also some Amaretto print ads using his profile. 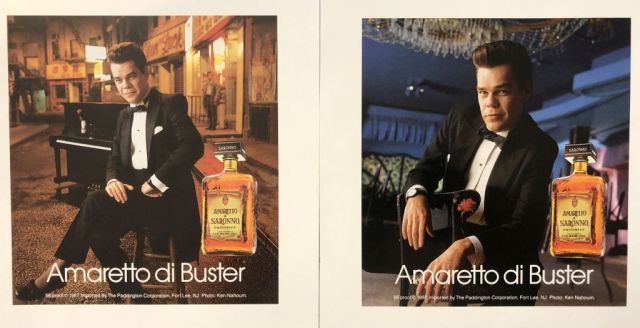 During the 80s and 90s, I chalked up a total of 19 Poindexter shows and looking back, that just didn’t seem like enough. Whenever I could, I shared the experience taking family and friends. Even Mom and Dad loved Buster. At the Bottom Line, it was also impossible to not stay for both the early and late shows.

In October 1986, I was in New York City for Elvis Costello’s week-long run at the Broadway Theatre. On Wednesday night after his show, I was able to scoot downtown to the Bottom Line in time for Buster’s late set. Also following me to the Village were Costello, his lady Cait O’Riordan and band member T-Bone Burnett. Outside of visibly enjoying the show, afterwards they also successfully enticed Buster to emcee Costello’s Friday night Spectacular Spinning Songbook show. Buster Poindexter was the perfect compere for this evening of songs selected by fans spinning a giant wheel. And, as a bonus, Costello’s band, the Attractions supported Buster and Soozie for “Hit the Road Jack.”

Another evening I arrived for Buster’s show early and casually made my way to the backstage door to the left of the tall Bottom Line stage. I politely let myself in to find Buster smack dab in the middle of pulverizing his hairdo with the spray from a large can of the stuff. I introduced myself as travelling from San Antonio and got David to sign a page from the latest issue of Spin which had a Poindexter feature. He was most pleasant and as I left, his parting message was “Hey Mike, remember the Alamo!”

Despite his claim about “only in New York,” I once saw the show across the river in Jersey at Club Bene in Sayreville. Also, while I lived in Texas, Buster even came to San Antonio riding his “Hot, Hot, Hot” wave to lip-synch the song at a radio station promo event that I was unable to win a free invite to. I suspect that seeing him in this limited fashion just wouldn’t have been the same.

I couldn’t mention Buster without giving a nod to Brooklyn’s Fern Weiss. Long David and Buster’s #1 fan, she sat at the front table for practically every show with her trusty tape recorder. A treasure trove of hundreds of different songs covered by Buster Poindexter sits in her archives. She once told me that she made David a compilation of them all for his birthday.

After the career boost from “Hot, Hot, Hot,” there were three follow-up albums that saw limited commercial success. While the albums were enjoyable, they simply failed to capture Buster’s live appeal. I always thought a live video release would have been more appropriate to capture the show’s magic.

Over the years, the Bottom Line shuttered and the Poindexter flame waned. Shows became less frequent and Buster played places like the Lone Star Café and a brief high-priced stint at the Café Carlyle. Currently, Buster is making somewhat regular appearances at the New York City Winery. Still true to his word, it’s still a show that only plays in New York.

I can’t imagine that the Poindexter charm of the 80s hasn’t survived. It’s been way too long since I’ve seen Buster, and I long for another chance. When I do, I hope that Fern will be there in her usual place. 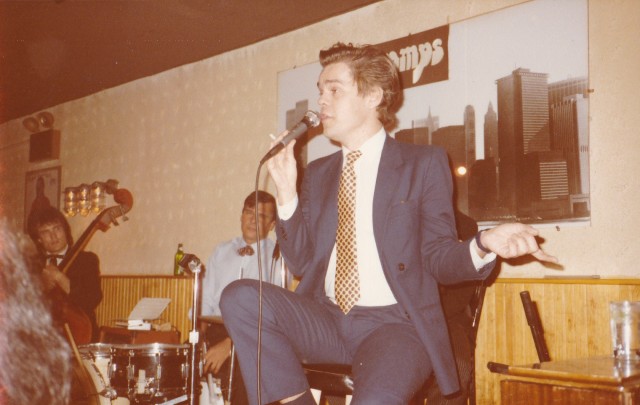