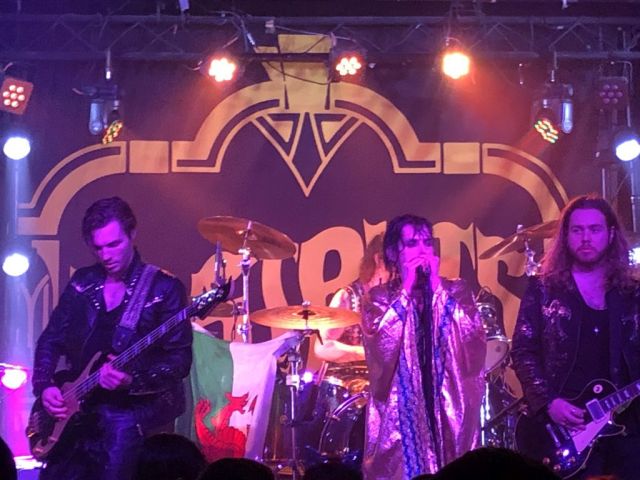 I feel obligated to let you know that you may have missed the most exciting concert to hit Nashville in 2018. British band The Struts took residence at the Beast for three nights in early December and remined us what a great rock show is all about. Yours truly was quite excited to see the opening Monday night show which left me with sincere regrets that I couldn’t see all three.

I first encountered these young lads when I was woken to the anthemic sound of “Could Have Been Me” after dozing off to a music channel on the couch. Their classic late 70s rock sound reminded me of the bands I loved back then such as Slade and Mott the Hoople. After watching the rest of the video, I wondered if I missed the memo about a Glam Rock resurgence?

This incident led me to their brilliant debut LP, and I sadly twice missed seeing them play Music City. The first time I passed on the big arena experience when they opened for Foo Fighters and the second was the recent Pilgrimage rain out. I couldn’t believe it when I saw that Grimey had landed them for two nights at his cozy East Nashville venue to which a third sold-out night was later added.

As talented as I think The Struts are, I’m stumped as to why they are not playing larger venues. They even are on a current buzz that scored them some quality US TV time. First was on Jimmy Fallon where they were joined by Music City’s Kesha reprising her recorded appearance on “Body Talks.” They also closed the creepy Victoria’s Secret network television special where they did the same song which was show appropriate but without Kesha this time.

Monday night at the Beast, The Struts kicked off at 9:45, and the quartet followed with two hours of non-stop fast-paced entertainment. Lead singer Luke Spiller sure knows how to work the crowd, and he had us all eating out of his hands, getting us to raise our arms or clap our hands-on command. In a most sincere form of flattery, Spiller has the performing flair of a Mick Jagger or a Freddie Mercury. His glam-induced ever-changing wardrobe and his stage moves seem natural and never forced or unauthentic.

The band behind him is solid, and Luke’s vocals are always right out front, never buried by the sound. Despite how powerful a sound that The Struts make, you hear every syllable that Spiller utters. He also seemed thrilled to see so many fans who sang along knowing just about every word of every song.

Placing the current single “Body Talks” second in the set quickly dispelled a hometown Kesha appearance. (I’m told their connection comes through common management.) However, a few songs in, Better Than Ezra front man and Pilgrimage proprietor Kevin Griffin surprisingly joined the band on stage to sing and play on a song. Looking quite under-dressed for the moment in just a tee shirt, I later learned that Griffin was a co-writer on the song they played, “Freak Like You.”

An expected surprise was the band’s cover of Bruce Springsteen’s “Dancing in the Dark” which has been a mainstay on recent set lists. This extended version saw Luke invoking the Courtney Cox music video moment where Bruce invites a dancer to join him on stage. There was a little twist tonight however when Spiller passed on a pretty girl and instead invited two young brothers wearing Santa Claus hats to be his dancing guests. It was an enjoyable moment although I could only image the looks on their Mom’s face as Luke was unable to control his “F-bombs!” (On night three, one-time Springsteen guitarist, Tom Morello, joined them for this song.)

This was truly a night to rekindle Nashville’s love for good old rock and roll. It was also refreshing to see the band express its appreciation to the audience, acknowledging how they are getting a better appreciation for their music on this side of the Atlantic than in their home base of England.

Sending us home with “Could Have Been Me” had me smiling all the way home and in to the next morning. Although I couldn’t clear my schedule to try to work my way into one of the next two sold-out nights, I nonetheless, started looking forward to the next time I get to see this fun exciting band.

Tags: The Basement East, The Struts