The time had finally come when Punk Rock became more commercially mainstream. It would be awhile before the music softened into New Wave, but eventually, Punk records started to be sold in the more traditional outlets. I specifically recall a day in 1979 when I was browsing the bins of shiny sealed new LPs at J&R Music World on the east side of Manhattan and was surprised at what I was seeing.

At last, among the REO Speedwagon, Styx and Kansas, I found vinyl by the bands I would formerly find only at a small indie shop like Bleecker Bob’s. So, what did I purchase on that joyful day at J&R’s discount prices? I went home smiling with fresh copies of Squeeze’s Cool for Cats and the Buzzcocks’ Singles Going Steady.

Another change going on at this time was on New York radio which was starting to play more of the new bands. WPIX-FM in particular, more so than my mainstay WNEW-FM, and it was on PIX that I learned to like the Buzzcocks. Raw, fast and loud, but full of melody. To me, they were a less angry version of The Sex Pistols, and they also came without the theater.

Never seeing the band live in their prime caused them to fall from my radar, although I did quite enjoy lead singer Pete Shelley’s 1981 solo effort Homosapien, which leaned more toward Synthpop than it did Punk.

My only other Buzzcocks’ reference around this time was when after seeing an early performance of the Butthole Surfers in San Antonio, I told Gibby Haynes how a few of their songs reminded me of them. This preceded a look of horror on his face before he replied “Oh, no! I hate the Buzzcocks.”

Well, I certainly didn’t hate them and was thrilled that I did finally get to see them live on the Vans Warped Tour at Nashville’s Starwood in 2006. They played in the hot afternoon sunshine and were just fantastic. If I recall correctly, I got to hear all the great singles: “What Do I Get?,” “Ever Fallen in Love,” “Orgasm Addict,” and my personal favorite, “Everybody’s Happy Nowadays.” I loved the show and with the band remaining active, I hoped that I might someday see them again.

Sadly, lead singer and guitarist Pete Shelley is gone, dying way too young at age 63. Here’s me and Pete together at Starwood. All photos are from that June 21, 2006 show. 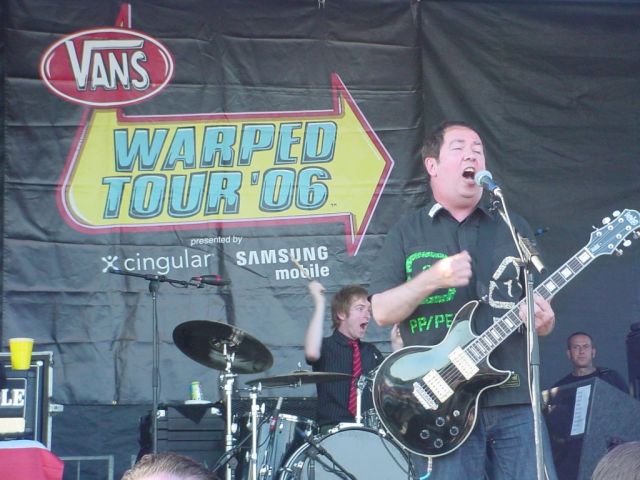