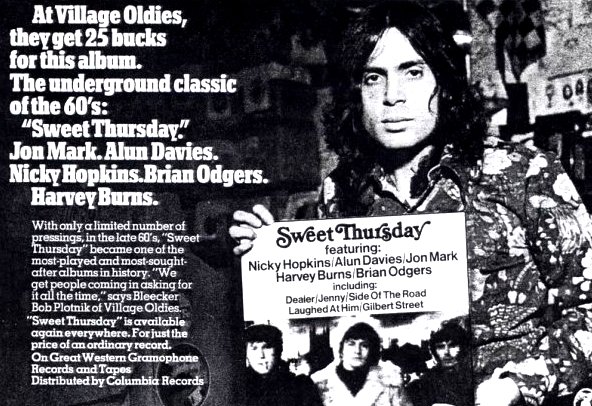 I’m glad that there was someone who cared enough to let us know that legendary New York City record store owner, Robert “Bleecker Bob” Plotkin has died. The death of the charismatic indie record store icon was reported yesterday by the Brooklyn Vegan blogsite. Bob is someone who should be remembered.

Cutting my teeth as a young music geek, I grew up in North Jersey and learned a lot about music and life in general by wandering the streets of Manhattan’s Greenwich Village. It was there that I eventually found “Bob’s” when it was in what I believe to be its second of three locations: a house converted to a storefront on MacDougal Street between Waverly and 8th, a block away from Washington Square Park. By the time the store moved to its final location on 3rd next to Ben’s Pizza off MacDougal, for me, it’s better days had past. In fact, after Bob’s serious stroke in 2001, the store ran without him until it shut down in 2013.

For many in my generation who first became serious about music and record collecting in the late 70s, there was no more exciting of a time than the years 1977-1979. The Punk/New Wave scene was in full swing and small indie labels were releasing tantalizing product that we all could not wait to get our hands on. We drooled over things like cool picture sleeve singles some of which were on colored vinyl and most of which came with treasured and otherwise unreleased B-sides. Those were also the days when many LPs were first or differently released in the UK and we bought them as imports

This product for the most part came from England and out of the burgeoning New York CBGB’s scene. During those years, Bob’s was the place to go for these records since he got them first and seemingly long before anyone else. The New York people knew to bring their stuff to his store to sell, and Bob also frequently traveled to London himself to bring stuff back.

My oldest memory at Bob’s was the day I noticed a white picture-sleeved single sitting on top of the wooden 45 rack on the wall behind the counter. It was the first time I ever saw or heard the strange name “Elvis Costello” and my passing on plunking down $3.00 for that Stiff Records “Less Than Zero” single would be something I would soon regret. It would also lead to the first time that Bob yelled at me.

After Costello soon became my musical hero, I started buying each British single in succession from Bob however, I still long craved an original pressing of that first single. Asking Bob one day about it, he told me it would run me about $30, and he would get me one next time he was in England.

A few weeks later, I popped into the store one night and there in the back were about 25 nerdy guys like me watching Bob open the big cardboard boxes of records he had just hauled back from London. We made eye contact at one point, and I then made the inappropriate act of asking him about my Costello single. He quickly tore my head off for bothering him at such a moment. I was quite embarrassed and later wound up paying $25 for an Ian Dury single I really didn’t need just to sort of make some peace with him and at least in my mind, not look so foolish.

The other times that Bob would get cranky and yell were when you went to the store and didn’t buy anything. But, that would often happen since for me since Bob’s really wasn’t a place to browse. It was a place where you knew what you wanted from reading the NME (New Musical Express). If anyone had what you were looking for, Bob’s did. And, if he didn’t have it yet, there sometimes was nothing to buy.

It was funny that in the mid-80’s, several years after I have left the New York area for Texas, I still would visit Bob’s whenever I was back home. He never knew me by name, but some five years after I moved, he once again yelled at me “How come you never buy anything anymore!”

But, Bob wasn’t always the cranky guy that I’ve portrayed thus far. My record friends and I spent a lot of quiet late nights there talking music with him. I recall one night when his was giving us some guidance about a bootleg Springsteen single we were sheepishly thinking about pressing. He told us where and how to get it done, but thankfully we thought better and passed on this foolish and unethical idea. Bob said how he would never himself do it although he said he did have some Keith Richards tapes he would love to press on vinyl.

He was also a walking Wikipedia about music. I remember one night somebody asking him about Bobby (“I Fought the Law”) Fuller’s death and without missing a beat, Bob quickly rattled off the details of his apparent suicide.

I also remember telling Bob I was planning on going to law school and somehow wasn’t sure that he wasn’t just pulling my leg when he told me that he was a lawyer. I later found out that he had in fact graduated from Fordham Law School but chose the record store business instead.

At Bob’s peak, for a time he also had stores in Hollywood and London. I once visited the LA store which was on Melrose and it just wasn’t the same without Bob’s presence.

One other remarkable thing about Bleecker Bob’s was the longevity of his store employees. Watch the video at the Brooklyn Vegan site to see what I’m talking about. Over the years, I bought many records from these guys as well as from Patti Smith guitarist and creator of the Nuggets compilation, Lenny Kaye.

After the great Punk/New Wave days subsided and things switched over to CDs, Bob’s became less important to me. It never transitioned to be a great place to shop for CDs, and there were of course less special vinyl releases back then. With the recent resurgence of vinyl, I wonder if the store could have made a go of it had Bob stayed healthy? It might not have been in the gentrified Village, but he’d probably have a store somewhere.

Still to this day, every time I’m in the City, I smile every time I walk past either of the two former Bleecker Bob locations in the Village that I used to frequent. Those early days at Bob’s were special. I hope that his mark on the indie record store movement with always be remembered. He is a legend and a character I will never forget.

That guy “Ron” in the video take-off of Bob’s in the Seinfeld video you can watch at the Brooklyn Vegan site is a pussycat compared to the real Bob. He was the true “Record Nazi” if there ever was one.