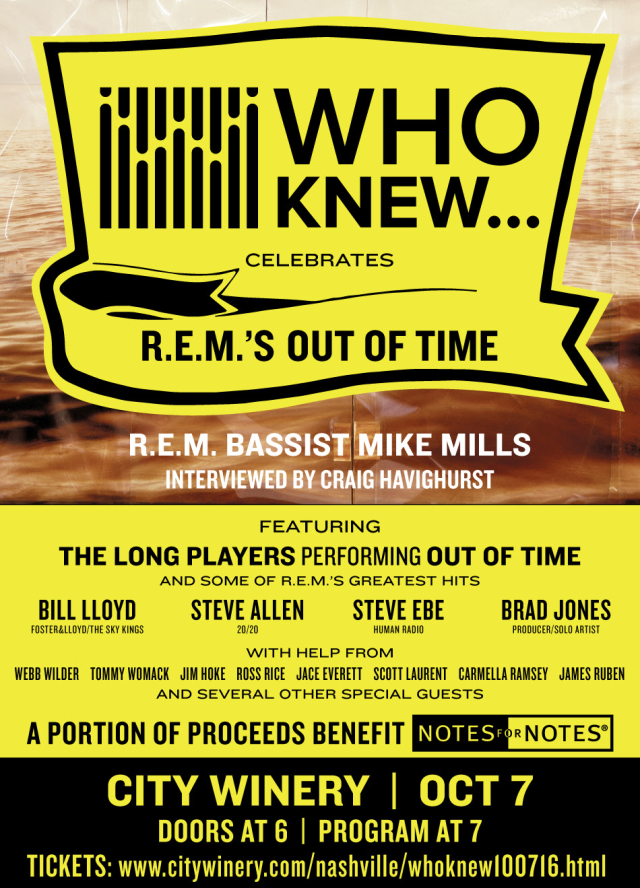 Serious rock music fans never let go of a band they love, and it doesn’t take much to bring out their total geekdom. Such was the case the other night in Music City when the local R.E.M. faithful got to let their geek flags fly, enjoying perhaps the most exciting live music moment in the band’s history since their 2011 breakup.

The setting was a “Who Knew…” event benefiting the “Notes for Notes” program that puts music studios into boys’ and girls’ clubs as an after-school activity. Billed as a celebration of R.E.M.’s Out of Time record (it just turned 25), on the card were an interview with the band’s former bassist, Mike Mills, and a performance of the record by Nashville’s noted album re-creators, The Long Players.

The pricier $100 tickets included a well-organized and friendly meet and greet with the likeable and much-loved Mills. Conducted in the CW’s upper lairs, things ran a little slow and made for a start about 30 minutes late. Records and posters were signed and photos were taken, printed and delivered on site. 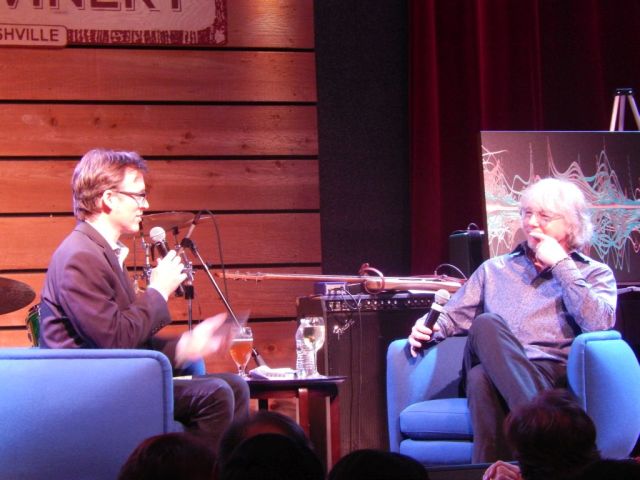 After an intro by the event’s organizer (a veteran of 20 R.E.M. concerts) and a short background film about the night’s beneficiary, local music interview notable, Craig Havighurst conducted an interesting fan-centric quizzing of Mills. The bassists’ once boyish looks are now overcome with some wrinkles and long gray locks, however, his archival knowledge and enthusiasm about his former band remained fresh.

The backdrop to the interview included a lovely original painting of the sound wave from the song “Losing My Religion” by U.K. artist, Tim Wakefield, that was later auctioned off for a $3,000 donation to the charity.

Havighurst’s questioning broadly covered the band’s formation, Mills’ impressions of the others (Stipe, Buck and Mills) and their Nashville history. It was remarkable to hear how the band’s songwriting process most often had Michael Stipe crafting lyrics to music composed by the other band members. 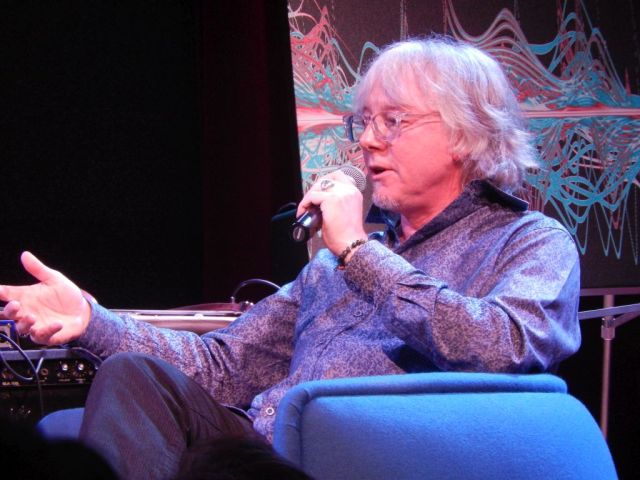 A few fan questions concluded the interview segment that in addition to putting a spotlight on the admiration for Mill’s bass playing, also produced the inevitable question about whether the band would ever play live together again. (“Don’t hold your breath,” was all Mills had to say, having earlier spoke about how they decided to quit while still on top and on speaking terms.)

The night’s billing left it unclear as to whether Mills would be performing with the Long Players. However, the money would have been on him at least playing some bass and possibly singing the two Out of Time songs on which he sang lead vocals. Well, although local pop-producer extraordinaire, Brad Jones, never relinquished any bass-playing duties to Mills, not only did Mike sing most of his two leads off the record, he also recreated all of his distinctive backing vocals for both the songs from the record and those in the encore selection of R.E.M. classics.

Anyone who has ever seen The Long Players knows the love, care and attention to detail that goes into one of their performances. Tonight was no exception with their previous 2012 performance of R.E.M.’s Murmur possibly giving them a head start. 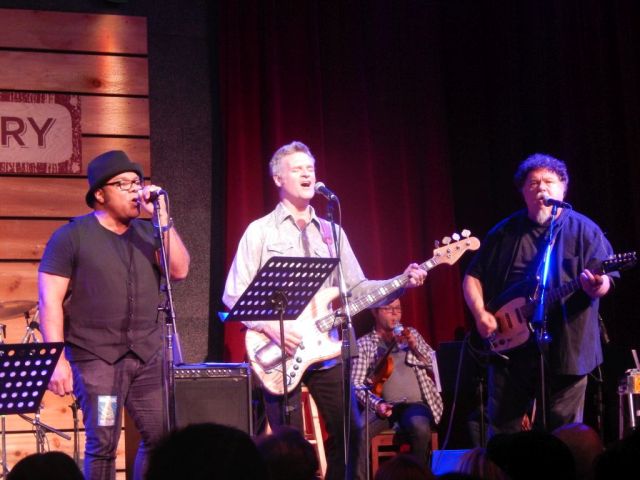 As always, country-to-pop singer and rhythm guitarist, Bill Lloyd, served as the band’s resident musicologist, setting the stage and filling the gaps in between songs with tidbits and anecdotes that helped put the songs and record into perspective. 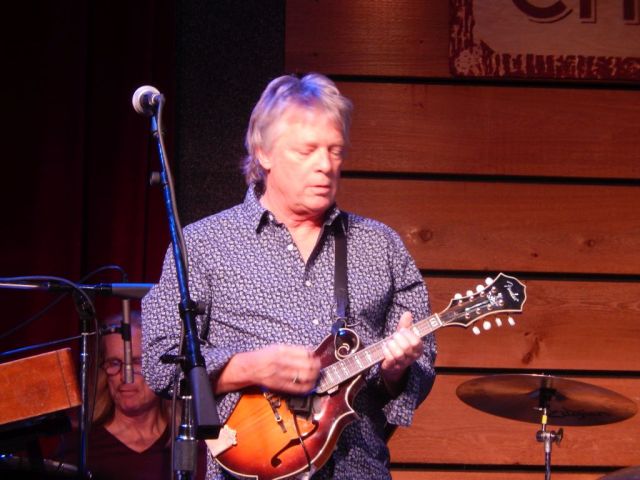 Musically, lead guitarist, Steve Allen was at the helm, serving as the band’s driving force throughout the night. Although Steve played a multitude of different guitars and a mandolin, there was no Rickenbacker that was frequently played by R.E.M.’s axe man, Peter Buck.

The singers were mostly from the Long Player’s usual roster of local performers. One of their newest additions, Jace Everett, is turning out to be one of their best, and he scored twice with great renditions of “Low” and “Finest Worksong.” Carmella Ramsey was also on hand doing a fine job of covering the vocal parts from the record by The B 52’s Kate Pierson.

Two of the singers, who started their careers around the same time R.E.M. did, Tommy Womack (Government Cheese) and Joe Blanton (Royal Court of China) offered great stories of their Nashville encounters with the band back in the day. Both seemed stoked to be sharing the stage with Mills.

One of the night’s begging questions was who would cover KRS-One’s rap bit in the opening number, “Radio Song.” The nod went to former Prince guitarist, rocker Dez Dickerson, who “took one for the team” and nailed it. Later, he got the whole crowd to “go literal” during his encore performance of “Stand.” 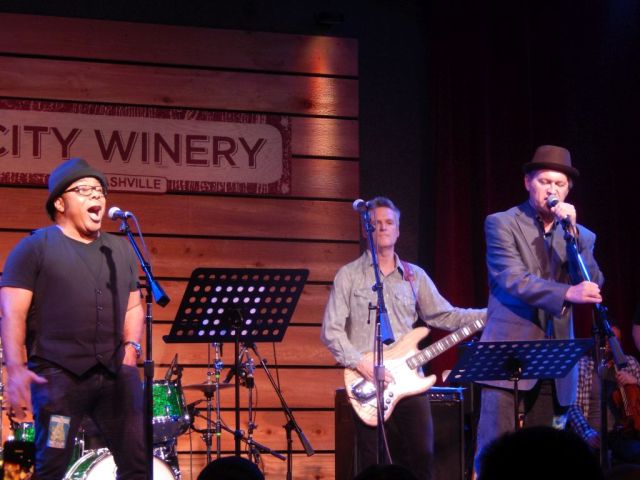 The surprise vocalist of the evening however was young Robin T. Zander, son of the Cheap Trick lead vocalist. His out-of-nowhere Long Players debut had Bill Lloyd joyfully label him “a chip off the old block.” 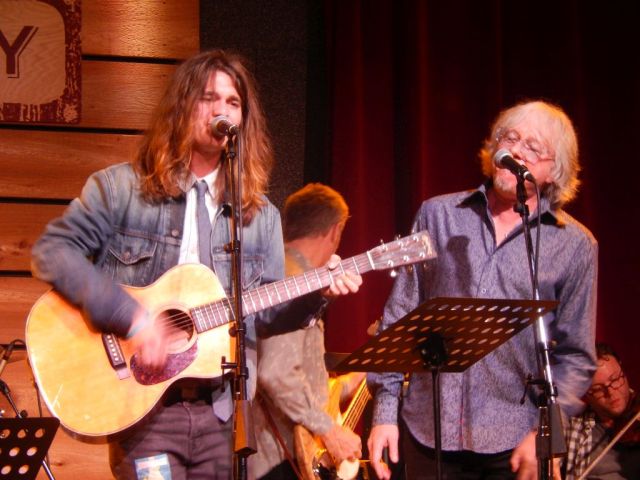 However, if there was an award for the best vocal of the night, that would go to “The Last of the Full-Grown Men” Webb Wilder’s powerful encore performance of “The One I Love.” Webb who continues to make great quirky countrified records of his own, never fails to steal the show when singing rockers with The Long Players.

For the final song of the evening, Mills took center stage for lead vocals on a rousing and spirited version of “(Don’t Go Back to) Rockville,” with most of the night’s ensemble returning to add backing vocals. Sung on record by Michael Stipe, in past live R.E.M. shows, Mills has taken the lead vocal on this song he wrote about an old girlfriend.

Tonight marked The Long Players first, and hopefully not last, appearance on the Winery stage. It’s a great venue for them. The addition of Mills was their best direct connection to a featured record since Al Kooper joined them for Dylan’s Highway 61 Revisited. I’d sure love to see more nights like this in the future.