Despite my disdain for outdoor shed shows filled with easily disinterested classic rock fans, I just could not pass up the opportunity of seeing Cheap Trick. After all these years, their music still sounds fresh and vital. And, as a performing live band, they still have their chops. Also, unlike many other 70’s bands, they still have the majority of their original roster.

Tonight’s sold-out show was part of the current “The Rock Hall Three for All” tour on which the Tricksters joined fellow recent Rock & Roll Hall of Fame inductees, Heart and Joan Jett & the Blackhearts. The opportunity to score a cheap lawn seat and get home early after watching Cheap Trick open for the two other bands made this a no-brainer.

Just prior to Cheap Trick’s prompt 7pm start, we were shown a short video of highlights from each artist’s Hall induction ceremony. Then, after a taped intro of some familiar quotes about Cheap Trick from the likes of Homer Simpson and Fast Times from Ridgemont High’s Mike Damone, as they most always do, the band kicked things off with the welcoming “Hello There”. 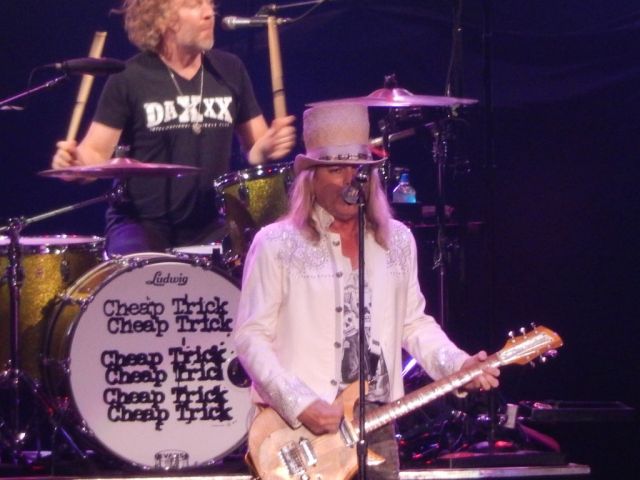 Lately, the three remaining original members have been supplemented by Rick Nielsen’s son, Daxx on drums replacing “non-touring band” member Bun E. Carlos. The set list pretty much had the songs a fan would expect, and certainly no one left disappointed. The two surprises were one recent song (“No Direction Home” from their 17th and latest studio record) and a cover by bassist (and current Nashvillian) Tom Petersson of Lou Reed’s, “Waiting for My Man” which he prefaced with some extended 12-string bass prolifics all-alone on stage.

Both Nielsens have spent time in Music City which Rick acknowledged by name-dropping some friends who were in the crowd. He later encouraged one of them, guitarist Audley Freed, to join him on stage to add his licks to their power pop classic “Surrender.” This number resulted in my only complaint of the evening. Rick, if you are listening, the guitar riff to this song is so perfect and forever engrained in my ears, that hearing you tweak it even the slightest bit was a letdown. There’s no need to touch-up one of the power pop’s most classic chords.

After the one-hour set, my evening was through, and I was home in time for a late dinner with the family! I wish more concert experiences could be this simple and easy.