I recently started buying old cheap vinyl records to revisit some 70’s singer-songwriters. My most recent was a mint copy of Harry Chapin’s 1972 Sniper and Other Love Songs for two bucks. A mellow Saturday afternoon listen on the couch made me reflect on this late New York singer-songwriter.

I thought of how exciting it once was to hear “Taxi” on late night radio (New York City’s WNEW-FM) when I could barely afford to buy records. I loved it and was captivated by Chapin’s mastery of the story song. OK, I never cared for that middle section falsetto of Sylvia Plath poetry by the bass player. And, eventually, by the time of the song’s “Sequel,” it seemed that Chapin may have worn out his welcome in this genre.

I saw Harry Chapin perform live only once, and it was in the peculiar setting of his New York City Broadway production, The Night That Made America Famous. Thinking back, my memories of the evening are slim. I do remember though saying after it was over that “it was nothing more than a glorified concert.” The highly-choreographed affair had Harry and a cast of others singing a selection of his songs, both old and new. Using costumes and props, these was a premise that the songs somehow thematically fit together.

In retrospect, maybe Chapin was ahead of his time in light of how many rock music catalogs were later used as the centerpiece for a high-priced run on Broadway? But unlike The Four Season’s Jersey Boys or Carole King’s Beautiful, there was clearly no real thread that held Harry’s songs together for a stage production of this type. 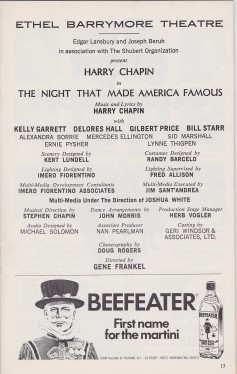 Sitting on the end of the aisle in the orchestra, I also recall Harry being inches from me as he exited from the performance. He walked down the center aisle carrying his jean jacket over his shoulder with a solemn look on his face—a look that I somehow can still vision.

Prior to the show’s opening, Chapin said this to Rolling Stone about the work: “It’s a multimedia meeting place of a musical and rock concert. There will be 50 songs, 16 of them new. We have the first six-figure media budget any Broadway project like this ever had.” Guessing who might attend such a production, Chapin said, “I think I write for real people. My vision is evidently shared by many people.” 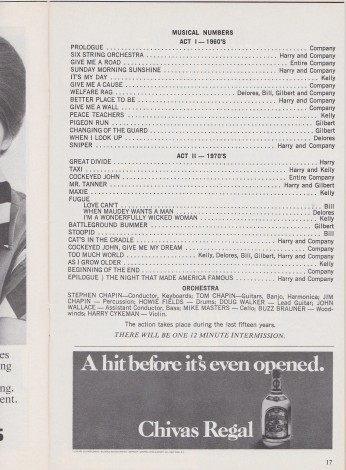 Looking through the musical numbers, despite Harry’s original vision, there were only a total of 30 Chapin original songs making up the musical revue. Of these, eight came from the four LPs Chapin had issued up until this point. It was one of his older songs, “What Made America Famous?” that gave the musical its title. This story song is about a plumber who saves some hippies from a fire. Maybe you can see how that story line might have difficulties connecting with songs about taxi drivers, snipers and absent fathers (his recent #1 hit “Cat’s in the Cradle”).

One thing that perplexes me is whether Harry Chapin devotees have any access to the remaining unreleased songs from the musical? Of the other 22 compositions, only 2 saw subsequent release and another one was later heard in the Cotton Patch Gospel, a 1981 musical for which Harry wrote music and lyrics. Will these lost songs will ever be heard again? Is there a video of the complete performance?

Rock critics never had much love for Chapin’s music. In his Rolling Stone review of Harry’s debut LP Head & Tales, Ben Gerson just ripped “Taxi” apart calling it “a veritable textbook of lyrical, melodic and production errors.” Some of the unflattering adjectives he used to describe the songs were “banal” and “preposterous.” In his Record Guide, Robert Christgau slammed the Short Stories LP with a D+, but was less harsh to Heads & Tales with only a C-. (“Stash that bill in your shirt Harry while the stashing’s good, Harry.”)

Theater critics were as about as equally unkind to Chapin, and despite, two Tony nominations for actor (not Chapin) and actress in a musical, the show had a short life of only 14 previews and 47 performances. (Oddly, the Playbill internet database shows the run as being from February 14-April 6 while my personal notes and ticket stub seem to indicate that I was there on May 23rd.)

In his February 27, 1975 review for The New York Times, noted theater critic, the late Clive Barnes, said the show “is more like an animated record album than a musical. But animated it certainly is.” As for Chapin’s thematic intentions, Barnes sees Chapin as “a singer of ironic dissatisfaction. He feels there is something wrong with the American dream and that when people wake up to that it will be ‘The Night That Made America Famous’.” However, sounding like some of the rock critics, he adds “The man has a point—but like most of his points it is platitudinous.” Barnes, whose reviews could make or break a Broadway show, summed it all up on the somewhat sour, but gentle, “it will probably be best liked by present devotees of Mr. Chapin” and “With luck there may very well be enough of them.”

Harry’s two musical brothers, Stephen and Tom were both part of the production. On a VH1 Behind the Music special about Chapin, Tom seemed to think the idea was a mistake from the start. He said “Nobody wanted to do it except Harry. He just had a number one hit in America, and now instead of touring and doing television specials and being the “guy,” he does a half-assed Broadway show. And, it didn’t work.”

For more about Harry Chapin’s music and life (including his exhausting humanitarian efforts and his tragic death at age 38 in a car crash), the complete VH1 Behind the Music special can be found on YouTube.

As for The Night That Made America Famous, The New York Library Digital Collections hosts over 100 black and white photos from the show. The photos give you a feel for the cast and setting. This photo below by Kenn Duncan comes from the collection which is available for purchase through the site.

Tags: Harry Chapin, The Night That Made America Famous