Just when I thought my three nights in London couldn’t get any more fascinating, I went to see the inimitable Robyn Hitchcock in a solo acoustic performance at the historic Union Chapel in the Borough of Islington.

It’s hard to write about this show without first discussing its setting: a historic working church built in the 1870’s that today also hosts live entertainment. Time Out magazine even named it “London’s Best Live Music Venue” in 2012, and I don’t disagree.

My many nights at Nashville’s Ryman Auditorium have made me no stranger to sitting in a wooden church pew to hear live music. After finding a seat in the second one from the front, I then took several minutes to simply take in Union Chapel’s breathtaking main room. The large open area created by the cathedral ceiling was accentuated by ornate designs on its walls and balconies and several stained-glass windows. I then retreated to the cozy dining room where I had a delightful pre-show homemade meal.

Having arrived early to secure said choice pew seat, I soon discovered that I had apparently sat in the “American” section and chatted up a few visiting Yanks like myself. The show promptly began at 8pm with a pleasant set by Australian Emma Swift who made me think of home when she spoke of the few years she just spent living in Nashville.

After Emma’s 30-minute set. Robyn Hitchcock promptly took the stage at 9pm for his set that he stretched right up to the venue’s strict 10:30pm curfew. 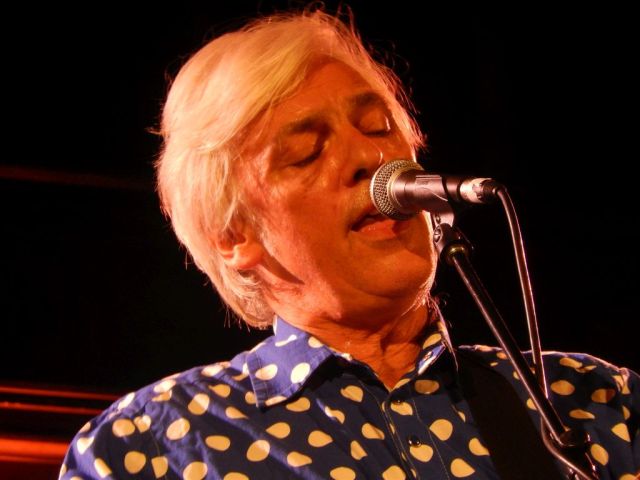 As I have previously said about my feelings for Hitchcock, it took me several years and a few live shows to finally get what he was all about. It takes some effort, but, once you get that Robyn is as much of a comic and a science-fiction nerd as he is a musician, you find yourself comfortably watching one of the most entertaining artists you will ever see perform live.

At a rather youthful-looking age 62, the white-haired Hitchcock has taken quite good care of himself. I must say that he has aged most gracefully in both his distinguished handsome gentlemanly British looks and his flawlessly sharp singing voice. The smartly-attired Hitchcock is usually found as he was tonight, wearing a colorful flashy psychedelic-looking shirt that looks like it came right out of a vintage shop in Haight-Ashbury.

Though he is a fine song-writer in his own right, Hitchcock is also a clever interpreter of other’s work and his erudite selection of cover songs is first rate. Tonight we got one right off the bat with his show-opening interpretation of some 90’s Dylan with “Not Dark Yet.” He would later fill his encore with a pair of choice covers from two great bands from London.

Robyn did not stay alone on the large open stage for his entire set. Mid-way through, Ms. Swift joined him for backing vocals on three songs. Later, after waiting in the wings all evening, Nigerian cellist Jenny Adejayan came on board to play on the final three songs of the night.

Suffice to say when it was all said and done, Robyn Hitchcock and Union Chapel worked quite well together making for a pleasant first-class evening of musical entertainment.