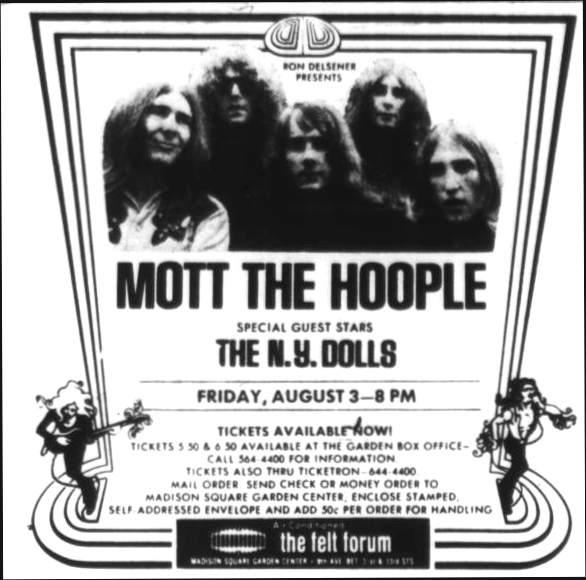 In 1973, you had only one option if you wanted to listen to pre-recorded music in your car—an 8-Track tape player. The fidelity was lacking to say the least, never mind the problems caused by the need for the music to be divided into four separate stereo bands of equal length. Timing issues sometimes split songs between two tracks creating a pause and an annoying “ka-chunk” sound in the middle of a song. The tape would also often misalign with the heads letting the sound of one track bleed into another— inserting a matchbook could resolve this issue. All this nonsense leads up to the fact that one 8-Track that I wore out from listening was Mott the Hoople’s All the Young Dudes.

Mott had previously released four albums in sort of a Dylan-esque folksy vein until 1972 when David Bowie brought the band into the glam rock era. “Ziggy Stardust” offered them first shot at “Dudes” after they rejected “Suffragette City.” Mott’s recording of “Dudes” later went on to become one of rock’s classic anthems. 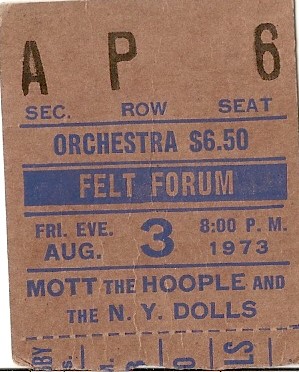 This show at Madison Square Garden’s smaller room (now called The Theater at Madison Square Garden) was one of the last to feature the original and complete Mott the Hoople band until their 2009 reunion gigs in England. Soon after the Felt Forum gig, lead guitarist Mick Ralphs left Mott to become a founding member of Bad Company.

This was a big night for the New York City glam rock community, and yours truly, of course, felt way underdressed. Glam was a forerunner for the soon to surface punk rock movement. This night’s opening act was instrumental in paving that road. Following a spirited introduction by their multi-colored hair producer, Todd Rundgren, the almost original New York Dolls (save their late drummer) performed a sloppy, raucous set in full drag and high heels. At the time this was quite shocking to a young 17 year-old who was just too young to understand the birthing of punk rock.

Cheers to one of the day’s hottest bands for giving the Dolls perhaps their biggest local showcase to date. I faithfully remain a big fan of both bands and continue to see David Johansen perform every chance I get. Over the years, I have not been as fortunate in seeing Mott’s lead singer, the 74-year old Ian Hunter, perform, but I am looking forward to a show later this year in Brooklyn.

Here’s a link to the Doll’s set list from that night.