One lazy Sunday afternoon, I hit the couch plopping down my vinyl copy of Television’s 1978 LP, Adventure. The enticing sounds of the twin guitars of Tom Verlaine and Richard Lloyd made me regret that I never saw them perform live at CBGBs in the late 70s. In those early punk days when many new bands were raw and learning as they went, I wondered what people thought about these guys who really could play so well from the get-go.

Although I lived just across the river from New York City during the heyday of CBGBs, I shunned the place. In addition to being a total dump, I found it unfriendly and uncomfortable. Strangers didn’t interact like music fans do today. Everyone seemed much more concerned with how they looked rather than with paying attention to the music. Perhaps I was a bit too self-conscious in my awkward late teens.  Plus, my budget and lack of the style gene didn’t make looking fashionable easy for me. I only made a few trips there–it just wasn’t my scene.

Just a few days after my couch time hearing Tom Verlaine sing about the “Glory” over some pops in the vinyl, I couldn’t believe the e-mail news I received: Television would be playing three U.S. shows–San Francisco, Austin and Athens. I instantly decided to make my first journey to the town R.E.M and the University of Georgia made famous. At the cost of two vacation days and a total of eleven hours behind the wheel, I never once doubted whether or not it would be worth it.

Athens’ classic Georgia Theatre is a restored venue with a rather unique twist. Although the floor seats have been removed, the steep incline on the floor remains. This meant that when I stood back from the stage, I could easily see over the heads of those standing in front of me. Further adding to the enjoyment of this long sold-out show was the acoustically-perfect sounding room.

Excitedly, I told just about everyone I was going.  Incurring their jealousy, most of my friends replied with an “It’s without Richard Lloyd, though.” True.  But, the first time I heard replacement Jimmy Rip take a solo, I knew Tom Verlaine had found a suitable substitute. Richard Lloyd was not missed.

The night was a guitar extravaganza featuring perhaps the best two guitarists I have ever seen share a stage together. The amount of tuning that went on between songs was a reflection of how aggressive these guys were working their weapons with most of their playing time spent on the bottom of their guitar necks. 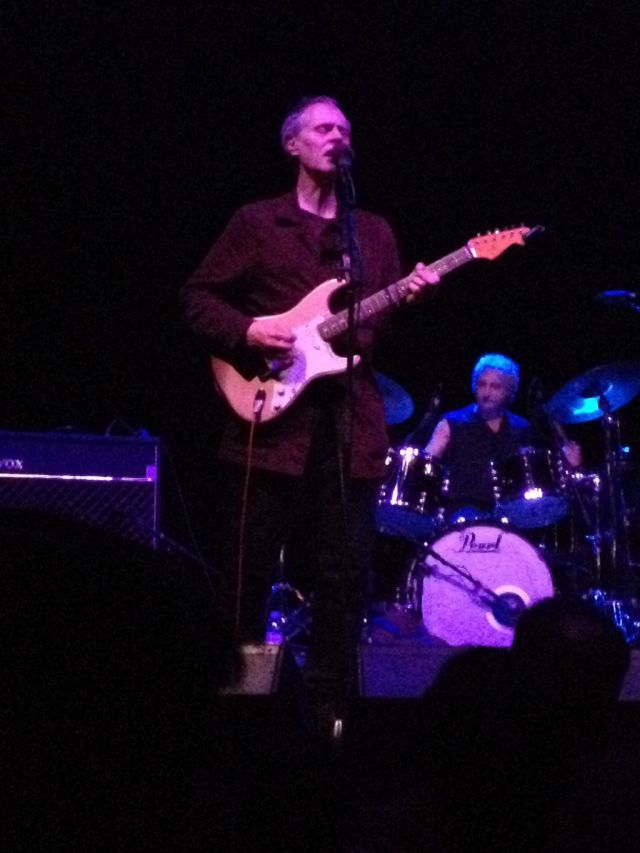 Despite being the obvious band leader, Verlaine had little to say between songs. His voice sounded as good as it always has—compact, brittle and cracking at times, just like it did on the records. Never having seen him before, the way he walked with his shoulders high and the way he held his guitar reminded me of Talking Heads front man David Byrne. Did these two ever cross paths back in the CBGB days?

Verlaine and Rip’s guitars led the band’s original and still solid, rhythm section through the 110-minute set. Opening with “Venus” from 1977’s debut LP Marquee Moon, the band played seven of its eight songs and closed the main set with the stellar title track. Their follow-up records in 1978 (Adventure) and 1992 (Television) were represented by only a single song each.  The night’s surprises were a great performance of “Little Johnny Jewel,” their debut single on Ork Records; two unreleased songs (the newer “Persia” and the older “I’m Gonna Find You”); and the show-ending cover of garage-rock nugget “Psychotic Reaction.”

After all my anticipation, it seemed that this show ended way too quickly for me. Even so, the first words out of my mouth when it ended were, “It was worth every bit of the effort, and I’d do it again in a heartbeat.”

Television will be appearing at the Big Ears Festival in Knoxville, TN on the weekend of March 28-30, 2014.