When time allows, I make a concerted effort to prepare for my upcoming concerts. My usual M.O. entails going into completist mode about the artist I will be seeing and filling my travelling iPod with as much of their recorded work as possible. The process normally involves used CD purchases from Amazon which I find the most cost-effective way to fill holes in my collection. I usually spend a few days listening to the artist’s catalog chronologically.

Unfortunately, the advance prep for my first taste of Iron & Wine live was limited to several passes through their penultimate work, 2011’s Kiss Each Other Clean. I acquired this fine record after being totally swept away by the gorgeous “Tree by the River.” I subsequently found that this song was melodically, but not lyrically, similar to most of their recorded work. While “Tree” follows a strict narrative storyline, most of the band’s compositions follow a more allegorical, literary path. Although most of the night’s songs were new to me, I was completely captivated by the sounds I heard during the two-hour plus set of beautiful, heartfelt music. 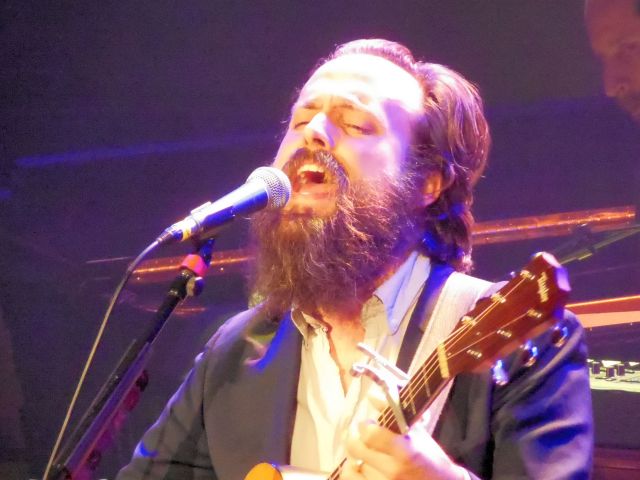 I may not have been fully prepped for Iron & Wine’s return to the Ryman (they last played there in November 2008), but Sam Beam, the artist behind the band’s name certainly was. The bearded singer-songwriter brought with him a backing band large enough to keep the tour bus industry alive. Handling all the night’s guitar duties from a selection of three different acoustics, Beam’s lush and lovely vocalizations of his compositions were accompanied by a full ensemble of a dozen players.

Beam wasn’t kidding when he began the night saying he had “a lot of songs to get through.” Although focusing on his latest release, Ghost on Ghost, the show included 24 songs spanning Beam’s career. In addition to including songs from all four full-length Iron & Wine releases, he did his homework to please his hard-core fans and played a handful of rare bonus and EP tracks during the set. One pleasantly familiar to me was Beam’s version of The Postal Service’s “Such Great Heights.” (His version appeared on a bonus vinyl disk that came with the Service’s 2004 debut album release.) The band also played “16, Maybe Less,” a song from Iron & Wine’s 2006 collaboration with the alt-country band Calexico—another act for whom I find myself listening-deficient. 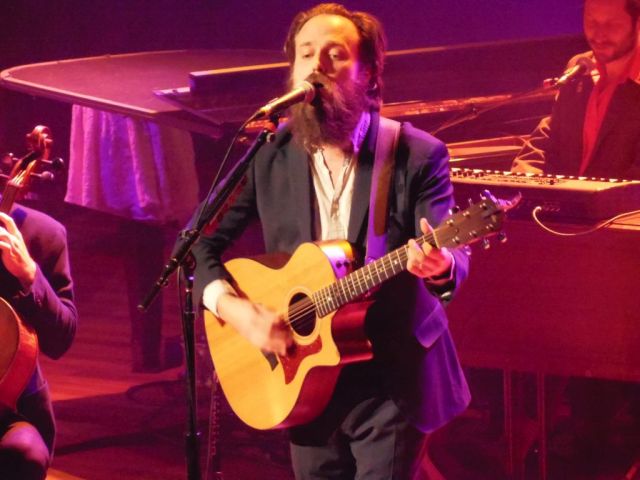 Midway through the night, Beam gave the band a break and performed three solo songs on his acoustic. Included in this interlude was a new song “Waves of Galveston” before which he discussed his experiences in the Texas city.  Beam ended the night with a solo version of a rare track called “The Trapeze Swinger.”

Two hours of hearing unfamiliar music can be a draining experience, but Beam and band never once lost my attention. My heart went out to Beam for being one of the most gracious and humble performers that I have ever seen. His warmth and
appreciation of the audience’s favorable response further added to my enjoyment of the evening.

I left with a plan to explore Iron & Wine’s vast catalog and look forward to seeing them again–better prepared for the experience.