In the late 70’s, a New Jersey music writer with the pen name of “Everynight Charlie” tried to go to a concert every night. I often wonder if this is what my life would be like if I were single. Although live music every night is not my ultimate desire, with my wife out of town and for the sake of on-line journalism, I thought I’d give it a try for a week. I planned my schedule with the goals of keeping costs down and the nights early. With apologies to Moon Mullican, here’s how my “seven nights to rock” went down.

No matter how many times I’ve been to The Basement, I am always the first one there. It’s just the kind of place where people seem to arrive at the last minute. So, I grabbed my usual front stool on the side and waited for the show to start. The headliners (Red Dirt Rangers) were an unfamiliar band, but my evening was focused around seeing only Mando Saenz, a Nashville singer-songwriter by way of Texas.

It was a quiet night at the club: The crowd numbered only about thirty while I was there. With Saenz listed in the opening slot, I thought that I would get home in time for Breaking Bad. The order was switched, however, so I first heard a brief set by a fine, young competent Texas writer named Ben Danaher.

Saenz followed with a sharp solo acoustic set covering nine songs in 40 minutes. Most of what he played came from his new third effort Studebaker. Some of his songs stay flat to their narrative style, but I find him at his best when he works in a catchy chorus like he does on the title track. Check out his free download of “Hard Time Tennessee” to hear a fine example of this talented writer at his best.

Shamefully, this was my first trip to see Nashville’s Monday-night institution of talented local players reliving the history of Texas swing music. The Time Jumpers’ ten-year plus weekly residency at The Station Inn was recently moved to this larger venue which was packed to the gills (pun intended). Doors open at 5:30 so it’s a long wait if you want a seat. But, unlike their previous home, you can at least get an advance ticket and get there late to stand like I did.

While the Jumpers’ version of Texas swing may be a little jazzier than I expected, it was certainly a fun, frolicking romp with the only missing ingredient being a dance floor covered in sawdust. Brilliant musicianship a given, equally impressive was how in the hour-long opening set, seven of the eleven players had a lead vocal assignment. Two of these were from country superstar and semi-permanent Jumper, Vince Gill and his fellow Country Hall of Famer, Ranger Doug from Riders in the Sky.

Watching these guys perform so effortlessly was a treat. Gill, casually dressed in a golf shirt and shorts, best exemplified what these guys are all about—out having fun playing music they love. It may be a long evening if you want a table, but you are likely to find it well worth your time. 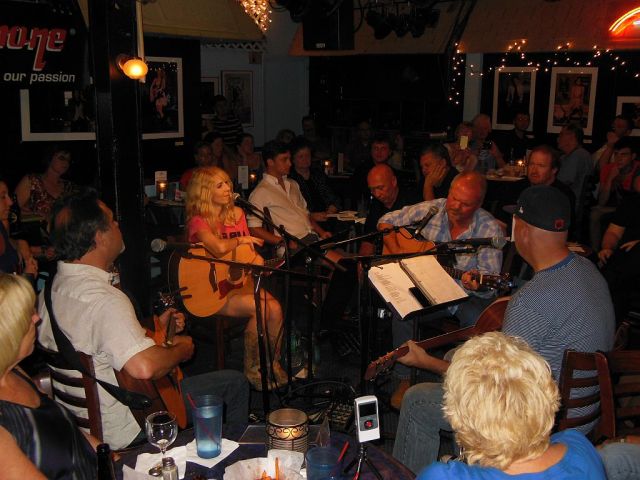 I had been to the Bluebird a number of times before this night, but I was now clearly in the minority when a show of hands for first timers seemed to include everyone but me. Many were obviously there as a result of the Nashville television show’s reference to the club as evidenced by all the door front photo ops. This was my first visit to the free early show, as well as the first time I went to see four unfamiliar songwriters.

The evening’s group was hosted by actress/screenwriter/author Riley Weston who is launching another career as a songwriter. She brought along friends Kent Blazy, Pete Sallis and Doug Johnson who all seemed to have already landed some serious “cuts” of their own. Not being much of a current country fan, I was again in the minority since many of their songs were instantly recognized by the crowd. Several million sellers for the likes of Garth Brooks and Ty Herndon (two artists you won’t find on my iPod) were sung tonight by their composers. A “guitar pull” like this is enjoyable even without being familiar with the songs since each was penned with the hopes of being a hit making them all catchy, chorus-driven numbers.

I found Weston quite entertaining and give her a big thumbs up as both a writer and performer. The guys, unfortunately, all write much better than they sing. Better at coming up with “hooks” than having the “looks,” this is why they have taken the career path of writing for others. Nonetheless, they were all quite engaging and generally provided interesting color and insight into their creations.

The early set at the Bluebird is a great night of free, fun entertainment. And, I highly recommend the chicken quesadilla! If you plan on going, pick a show and book your table at 8:00 AM sharp seven days prior. If you don’t, you will need to line up before 5:00 PM like I did for one of the 26 bar and pew seats made available on the night of the show.

Record shop in-stores in Music City thrived back in the days of Tower Records on West End and still continue regularly at Grimey’s. This mid-week event featured fiddle-player extraordinaire, East Nashvillian Amanda Shires, promoting her new release, Down Fell the Doves.  It was made extra special by the company she keeps. Her seven-song, 35-minute set included her husband Jason Isbell on lead guitar along with his full 400 Unit band of which his wife is often a member.

Ms. Shires played both her fiddle and “uke” in presenting her literary-laced songs that are thematically a departure from the classic Americana sounds she usually supports. It sure was a treat to be up close and personal watching Isbell traverse the neck of his guitar and Shires bow her fiddle.

Surprisingly, despite being held in Grimey’s bigger room, only about thirty or so were in attendance. This mellow musical pleasantry turned out to be the earliest night of my week’s adventures. I left with a smile knowing that I would be seeing this band again later in the week in a different setting. 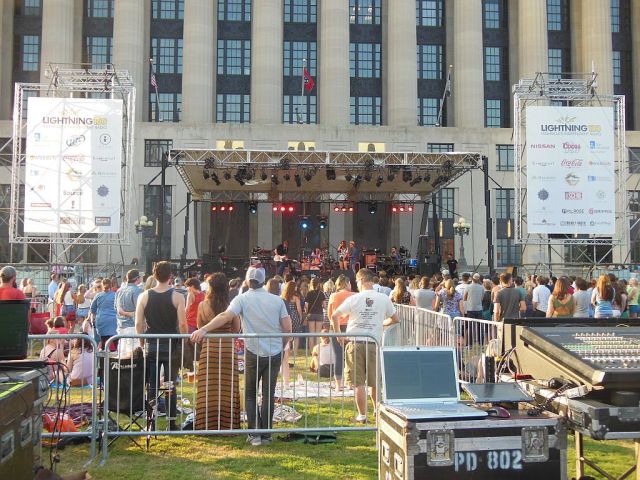 Nashville has had a long-standing run of free outdoor concert series (Uptown Mix and Dancin’ in the District were the best). Thankfully, it also has a great radio station like Lightning 100 to sponsor Live at the Green to keep this tradition alive. Now in its fifth year, this night would be week two of six. By my rough count there were at least 2,000 there to join me in the night’s festivities.

In going to this event I put on my casual concertgoer hat since nights like this attract more folks out more for socializing than listening. I previously swore off this event in year one declaring that “I didn’t like going to a concert where you were allowed to bring your dog!”  I must say that this year the setup better segregated the two factions by its placement of food trucks and beverage tents as well as a few smartly stationed barricades.

Strolling about taking in both the scene and sounds, I enjoyed the opening 30-minute set by Nashvillian songstress Erin McCarly. (She currently appears as a member of Rayna Jaymes’ band on the Nashville television show.) Backed by a full band herself this night, she is a pleasant enough performer with whom my musical tastes just don’t quite connect. Her choice to cover INXS’s annoying “Never Tear Us Apart” illustrates just that. The Mowgli’s whose song “San Francisco” is receiving a lot of Lightning 100 airplay were just too lighthearted and poppy for me, and after about 15 minutes I headed home skipping headliner Matt Nathanson.

It was indeed a satisfying evening in terms of getting to enjoy both the beautiful weather and good fish tacos and ice cream. I will be back on September 12th to see the hot new local act The Wild Feathers who I believe are about to hit the big time.

After my work week ended on Friday, I headed off to East Nashville to catch the “happy hour” entertainment of local rocker Tim Carroll and his band. Carroll is a gritty singer-songwriter who is also well-known as lead guitarist for his wife Elisabeth Cook. The venue is a drinking man’s dive bar with a bent towards live local rock music.  It served as the host venue for character Avery Barkley’s gigs on Nashville.

Playing for tips, Carroll’s power trio does a two-hour set every Friday afternoon, mostly of his originals. When I arrived at six, it was just me and another guy at the bar, but when I left after an hour, the crowd had grown to about twenty—half there for the music and half to drink and mingle.

Carroll’s tunes are well-crafted as evidenced by having been covered by several Americana artists. He’s by no means the best singer in town, but as a guitarist he ranks right up there. Although several of the songs they played were taught to the rhythm section on the fly, Carroll’s combo rocked tight and hard. I happily dropped a fiver in the tip jar and would not hesitate to stop by on a Friday night again after first grabbing some tasty Five Points Pizza. 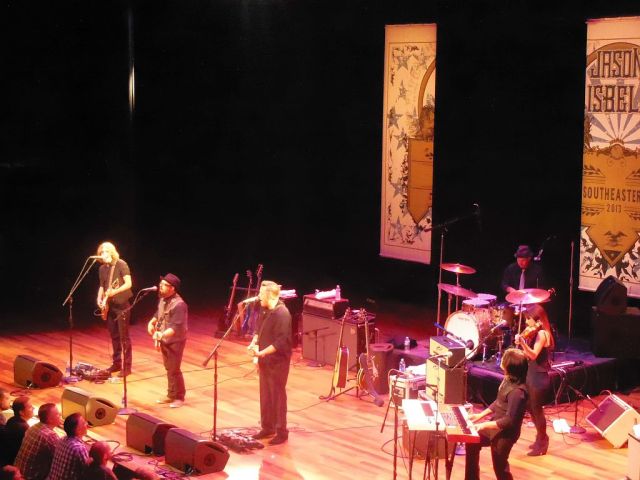 The final night of my week to rock was the only one that I had planned before the onset of my adventure. I saw the same band that I had just seen on Wednesday at Grimey’s, but this time Jason Isbell fronted the 400 Unit instead of Amanda Shires. Touring behind what I believe to be the best record of 2013, Isbell hands down gave the best show I’ve seen this year. The historic Ryman stage was also graced by the presence of the charming Caitlin Rose as Isbell’s specially invited opening act.

Both were truly humble and honored to be playing the Mother Church. Additionally, they were blessed to do so in front of an enthusiastic, sold-out, hometown crowd that included many family and friends.

Watch this space for more on this fabulous show.

Looking back on my week, I successfully achieved my objectives of a low cost, early to bed, week-long nightly journey through Nashville’s live music scene. Unlike the Mullican song, however, I was not accompanied each night by “a different chick in a different place.” Happily, as I finish writing this, I am on my way to the airport to pick up my lovely wife!