I can’t imagine there being a better series of home shows than the ones at Live @ Drew’s. Since February 1997, Drew’s house on the lake near the NJ/NY border has hosted 146 shows in its spacious living room overlooking the water. More than just shows, these events offer serious music lovers a chance to gather pre-show over food and drink to chat about their common passion. This was my third visit to Drew’s where an intimate crowd of about fifty curious fans came to watch Ellen Foley take another step towards reviving her long abandoned musical career.  To keep the neighbors happy, shows at Drew’s usually start early with food at 5 p.m. and the show at 6 p.m., but Foley and the Worried Men started a little later since there was no opener. 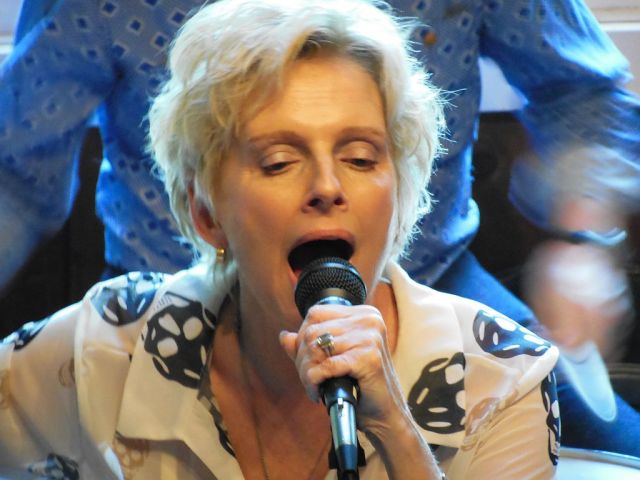 Foley’s career blossomed in the late 70’s with an impressive bio that includes three fine solo records in the pop-rock vein. Once the girlfriend of Clash guitarist Mick Jones, she collaborated with The Clash’s for 1981’s Spirit of St. Louis.  It was an unheralded gem produced by Jones that included six new Strummer-Jones originals. Her Clash legacy included singing with Jones on “Hitsville UK” from The Clash’s 1980 triple-album Sandinista!  Imagine my surprise when I heard this song playing in a Manhattan Starbucks just before heading to Drew’s.

Back in her heyday she worked with the likes of Ian Hunter and Blue Oyster Cult.   Although not her in the well known video, Foley sings the “Stop right there!” section of Meat Loaf’s “Paradise by the Dashboard Light.” And, in case a musical career wasn’t enough, she is an acclaimed actress having starred on the TV sitcom Night Court and having appeared on both Broadway and in film.

In musical hiding for quite some time now, Foley is back with her first new record since 1983. Entitled About Time, it is a fine collection of pop-rock tunes that came about through her new musical relationship with songwriter Paul Foglino, formerly front man for alt-country band 5 Chinese Brothers. Foglino, who also serves as band leader for the Worried Men, wrote or co-wrote all of the songs on About Time except for the cover of Randy Newman’s “Guilty.” This band of talented players also featured Steve Goulding of Graham Parker & the Rumour fame on drums as its newest member.

Her music tends to be a mix of pop and rock that slants sonically more to the rock side. In comparing her to the other female singers of her era, I liken her sound to more of a Pat Benatar than a Rachel Sweet. Her new music nicely picks up right where she left off.

Foley and band gave us a 90-minute, 22-song set that included all of the new record.  Her voice is still in top form.  In between she mixed a nice selection of covers plus Foley’s two most popular songs from back in the day, “What’s the Matter Baby” and “We Belong to the Night.”  Paul Foglino had one number to his own on “That’s How I Know,” a song that I didn’t recognize.  Expressing her love for the Stones (who she mentioned seeing in St. Louis back in 1969), Foley did a duet with backing singer Ula Hedwig (formerly one of Bette Midler’s Harlettes) on “Stupid Girl,” in addition to a take at “Sway”– “from their extreme heroin-chic period.” There was the odd choice of Don Henley’s “Boys of Summer” which seemed out of place while another seemingly odd choice, R&B number, “I Found a Love,” worked quite well.  The fun surprise cover of the night was a song she proclaimed that was hers to sing since it was written about her: A raucous version of The Clash’s biggest hit, “Should I Stay or Should I Go,” closed out the main set. Foley and band then returned to finish out the night with a nice reading of Jim Steinman’s power ballad, “Heaven Can Wait,” from the mega-selling Meat Loaf debut album. She wisely switched the order of the last two numbers (from what I noted on her hand-written set list) to close out on a quiet note.

After the show, Foley graciously attended to the merch table where she signed copies of the new CD (over-zealously plugged between numbers) as well quite a few copies of Spirit of St. Louis. It’s hard to say where the revival of Foley’s recording career will fit in today’s music world, but her new record is well worth a listen.