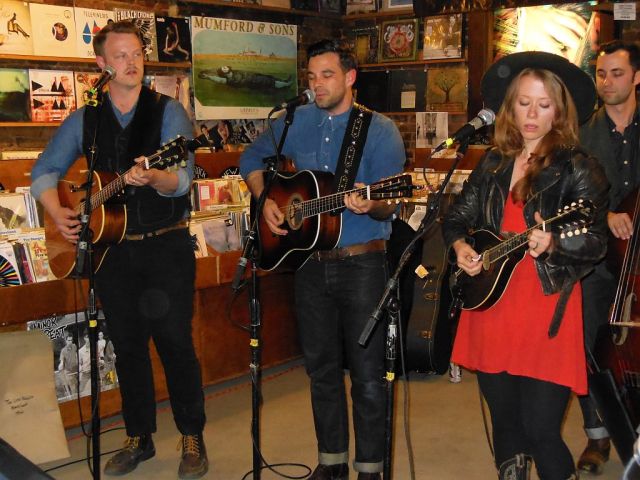 A buzz of excitement filled the crowded room at Grimey’s for The Lone Bellow’s Saturday in-store performance. Everyone knew that The Lone Bellow would soon be added to the list of popular back-to-basics Americana bands such as The Avett Brothers, Mumford and Sons, The Civil Wars, and The Lumineers. Each of these bands has also previously had their turn at Grimey’s or downstairs at The Basement.

The Lone Bellow’s show at The Exit/In that evening had been long sold-out.  The band’s assault on Music City would continue the following week:  After opening for Dwight Yoakum’s two nights at the Ryman, they would return to The Basement for a special midnight show that second night.

“Bellow” is a fitting name for this band. Their sound is layered with loud ascending harmonies that delightfully roar above excellent musicianship and songwriting. Band leader Zach Williams carries most of the weight. His two cohorts, Kanene and Brian, are equally adept during their moments upfront. Although The Lone Bellow’s sounds are upbeat, most of their original songs deal with soured romantic relationships. Their song titles make this apparent. To whom the songs are directed remains a mystery; the topic was never addressed.

The Brooklyn-based trio of Southern transplants (plus added bassist) gave the enthusiastic crowd six songs from their eponymous debut record released back in January to critical acclaim.  Most of the crowd seemed quite familiar with it. They also played a brand new song about which Williams playfully commented “Don’t tell anyone about it!” Williams had the misfortune of breaking an E-string during the second number. Without a guitar tech to help out, he carried on guitar-less until he became frustrated and chose to play it anyway. For the final two numbers, Williams engaged the eager fans with a cheerful sing-along to the choruses. It was a fitting compliment to the band’s spirited sound.

I see this branch of Americana as more of a return to tradition than as something new and original. Nonetheless, it gets a great deal of attention from both fans and press alike. I also believe that the Mumfords have received much more notoriety and acclaim than their talent merits. What would have happened had someone like The Lone Bellow come along first to rekindle this musical fire? Could it have been them winning Grammies and headlining festivals instead? They are a great band, and I predict they will soon have their day as well.