Music City generously offers many free musical events–all it takes to attend them is one’s ability to track them down. Thanks to a friend amongst the night’s performers, I was able to witness a brilliant display of talent in a truly remarkable setting. As a part of their Faculty Concert Series, the Belmont University School of Music presented 4 Pianos—16 Hands at its exquisite McAfee Concert Hall. The 857-seat hall, originally constructed and still utilized as a church, was recently acoustically refurbished into a lovely intimate venue by the same team responsible for the Schermerhorn Symphony Center. 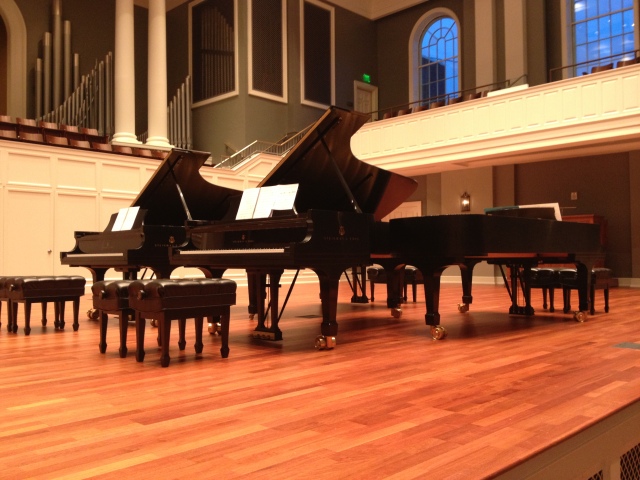 For tonight, the part of the four pianos was played by four Steinway Concert Grand pianos standing side by side and back to back. The sixteen hands belong to eight faculty members who together played said pianos in various combinations. The eight were all hands on the keys for only the opening and closing pieces which were without a doubt the high marks of the evening’s entertainment. The site of the full configuration had you sitting on the edge of your seat with anticipation of what your ears were about to hear.

The catalyst and launching point for tonight’s configuration was a thrilling rendition of Ravel’s Boléro. This well-known piece was performed in an arrangement by German composer Werner Genuit which he labeled “four pianos, sixteen hands.” The night’s presentation also included two contemporary compositions: the familiar Days of Wine and Roses and the not-so-familiar Theme from Mulholland Falls. The latter, taken from the score of a 1996 cult film, was nicely arranged by David McKay who shared in its performance. Several other arrangements of classical compositions were offered, including a Stravinsky piece arranged by another faculty member.

The “all hands on deck” ensemble reunited to end the evening with a rousing and spirited version of the popular The Stars and Stripes Forever. Using an M. Wilberg arrangement for four pianists and two pianos, the team took a risk and doubled the ante. They won big as the closing number wonderfully illustrated the magic of this format with each player’s parts brilliantly layered and interwoven into an overall exhilarating performance.