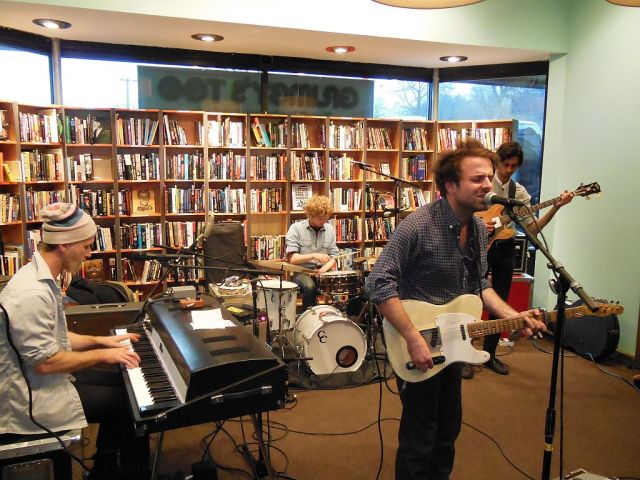 Los Angeles-based band, Dawes, gave two brief performances here in Nashville last week. Beginning with a lunch time, three-song “Not So Secret, Secret Show” broadcast live on local radio station Lightning 100 (listen here). The band then headed over to play a 5:30 sold-out in-store at Grimey’s Too.  After a few more promo spots around the country, the band will continue their busy year with a prestigious stint as opening act for Bob Dylan. Later this spring, Dawes will launch their own full tour supported by the exciting new duo of Shovels & Rope. The tour includes a return to Nashville in June where they will make a surprising career leap and headline at the Ryman for the first time.

As often is the case with Grimeys’ in-stores, this one required a pre-order purchase: Dawes’ Stories Don’t End which will be released on April 9th.  In addition, each attendee received an attractive commemorative poster of the event that the band signed after the show. Dawes fans will also be excited to know that the Grimey’s Too set was recorded for a future release. 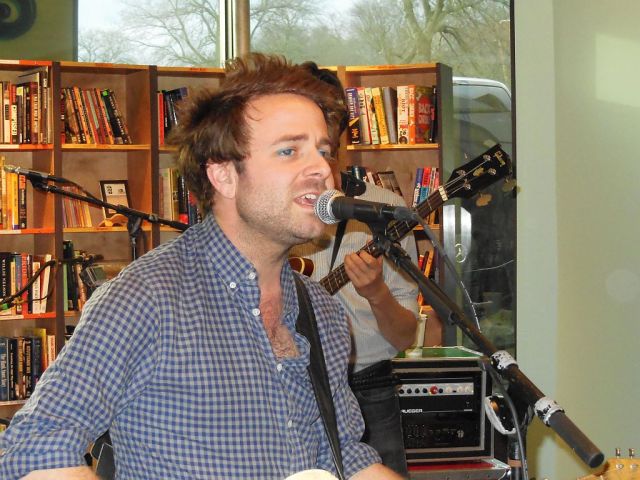 Dawes’ smooth sound and smart lyrical narratives cause them to be lumped into the Americana/Alt-Country genre. Their music, however, is more akin to the 70’s well-crafted, folk-rock Laurel Canyon sound that was birthed in their native LA. Dawes is a vehicle for the work of singer-songwriter Taylor Goldsmith who has been the sole writer of all the band’s recorded output. Unselfishly choosing to record and perform under the band identity, Taylor just as easily could have followed solo in the footsteps of a Jackson Browne or Joni Mitchell. In contrast, he exhibits more chops on his lead guitar work than your typical singer-songwriter.

Dawes eight song, 40-minute set began with their current radio single, “From a Window Seat,” a song about watching, dreaming and eventually writing aboard an airplane. The set also included four other new songs with Taylor introducing all of their titles except for “Just My Luck.” Alluding to its oft-repeated title refrain, he commented at its end, “Think you can guess the name of that one?” 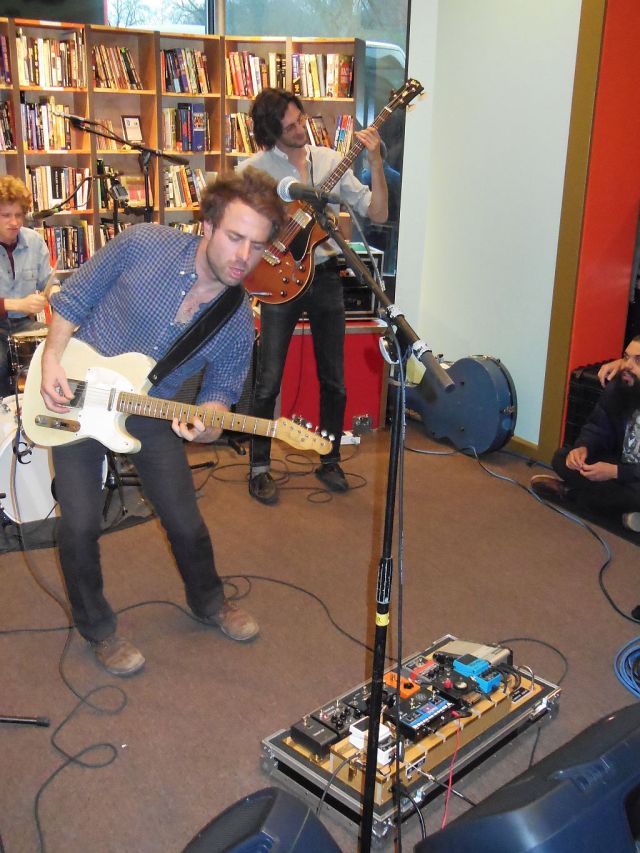 As for their back catalog, Dawes gave a nod to their home base with “Time Spent in Los Angeles,” perhaps their most familiar tune. The band also played “Hey Lover,” a cover of a song written by former original Dawes member, Blake Mills, who Taylor hailed as “an incredible songwriter.” The lead singer’s brother and Dawes-drummer, Griffin, got to share the lead vocals with him on this one. Noting that the band needed to “control themselves or this would become more than just an in-store,” the set concluded with “A Little Bit of Everything” from their last record. In summation, I agree with the closing remark by Grimey’s co-owner, Doyle Davis, who said “That was Dawe-some.”

If you are a fan of Dawes, and by all means I think you should be, I recommend that you check out Nashville’s own, The Silver Seas, a band that also pays homage to the classic Laurel Canyon sound.