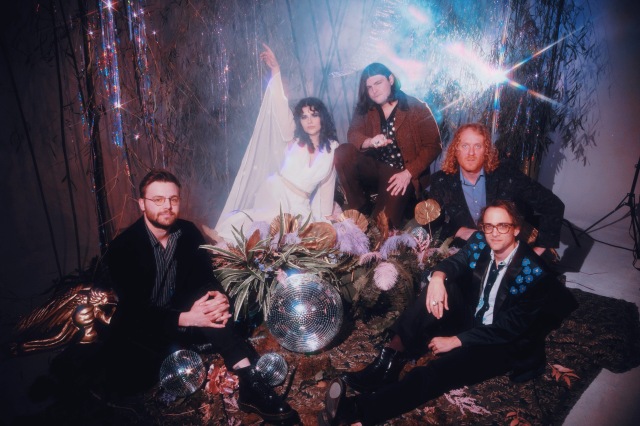 The Kill Rock Stars label, home for so much great-sounding stuff dating back to the wild ‘90s, will be releasing “Selene” b/w “Juna” by the Nashville-based band Roanoke digitally on Friday, June 3. A way cool 7″ vinyl single version limited to 500 copies is delayed like so many other things right now and will follow.

Roanoke is fronted by Taylor Dupuis (vocals/acoustic guitar/songwriter) and Joey Beesley (vocals/electric guitar/songwriter) who together serve up this uber-fine double dose of 11 Questions. The band which has been together now for eight years is rounded out by Richard Bennett on bass, Chris Elvidge on drums and B.L. Reed on electric guitar. Roanoke’s EP “Where I Roam” was named one the top ten Eps of 2018 by Paste Magazine.

Both sides of the new single are very radio-friendly and you can check out the video for “Selene” right now. “Selene” has a mystical classic rock sound that respectfully channels the best of a certain artist mentioned in the interview below. Lightning 100 needs to get ready to put this one into heavy rotation! There is also  a video for a stripped-down acoustic version of the song you need to watch as well.

Thanks Taylor and Joey for visiting 11 Questions.

Taylor: I am originally from a small town called Freeland, MI. I moved to Nashville in 2013. Sort of a weird story: I was hosting at a restaurant in Michigan during college and the members of the band Foreigner ended up coming in. I asked them their opinions on where to move to pursue music after I graduated, and they said Nashville. I’m still friends with [Foreigner drummer] Chris Frazier to this day. He actually played drums on our last single.

Joey: I grew up in West Palm Beach, FL (not too far from Miami). I was playing the bar/club circuit down there and, much like any young musician, I was curious as to what the future would hold. I had plans to build a van with my dad (who is a Master Fabricator) and travel the country until I found a city or town that I wanted to begin my artistic career in. I bought a map of the U.S. and hung it on my bedroom wall. I remember late one night after a gig; I was sitting in my room just staring at the map and I just felt a strong call to move to Nashville. I visited later that year and I knew right away that Nashville was a great city to make music in. I don’t know what the future holds for me, but I think I’ll be in Nashville for a while.

Joey: I am a huge fan of vinyl records. There’s just something about being able to hold them in your hands, brush off the dust, placing them on the turntable and dropping the needle that really does it for me. I even love that way the grooves feel as they rake across my fingerprints. I also have my theories on why vinyl is better than digital but I’m sure no one wants to hear an audio rant (ha-ha).

I used to go to the Goodwill and buy whatever vinyl records they had because I felt like no one I knew was doing that. I ended up with a lot of junk but some of it was cool (i.e., old classical records, some spoken word, a few soundtracks, etc.) My aunt gave me a collection of first pressings (one of which was “Stairway to Heaven”) before I even knew what that meant (naturally I ruined them…. RIP).

The first CD that I ever received as a gift was Van Halen’s 1984 because me and my dad both loved the intro to “Hot for Teacher” (thanks, Dad). The first CD I ever bought was Yourself or Someone Like You by Matchbox Twenty because i thought the crazy dude in the rugby helmet was funny (I was six). The last record I bought was probably something by The Who.

Taylor: The last concert I saw was The Rolling Stones here in Nashville. And man, do they still get it! And this is quite sad, but I honestly do not remember my first concert.

Joey: Yeah, I went with Taylor to see the Stones. It was their first show without Charlie Watts which I imagine must have been emotional for them. However, those songs, Mick’s swagger, Keith’s pirate-like aura, Ron Wood’s scarecrow dance, all combined with blazing hot guitar riffs and blues grooves still causes utter calamity to this day. It’s really something to see.  My first concert was a festival put on by a local hard rock station…wasn’t much to talk about.

Taylor: If I had to choose one, I would have to choose Stevie Nicks. Is Stevie not in there?? That’s a crime.

Taylor: Oh man, there are so many great local spots! I sometimes like to change it up, but Crema on Duke Street has been my go-to for coffee. For pizza, Five Points Pizza will always have my heart.

Joey: Oh man…now we’re talking! I’m a big coffee drinker; honestly, I should probably chill, but I just can’t quit, man. I’m sitting in a coffee shop typing this right now actually (ha-ha). My favorite coffee shop in all of Nashville is Headquarters on the West Side. I rarely make it out there though, so I’ll have to say that Madtown Coffee is a close second for me these days. As for pizza, Five Points is hard to beat.

Taylor: That is tough! There are so many good ones. One of my favorites is Raising Sand by Alison Krauss and Robert Plant.

Joey: Neil Young’s Harvest; that record is about as good as music gets in general.

Taylor: Best late-night food would have to be Five Points Pizza. We actually had it the night of the tornado after we played The Basement East. It was destroyed about 15 minutes after we left Five Points.

Joey: To be honest, the late-night food scene has really taken a hit since the Pandemic rolled through. If you came to me in a pinch after 11pm though, I’d have to point you towards Micky’s. Not many people know, but they have an unreal Cuban sandwich.

Taylor: I like this question! I mean if I could pick anyone, it would probably have to be Erin Rae, Leah Blevins, and Yola. Their songs blow me away, and they are all incredible women.

Joey: First pick is Nordista Freeze! We played a show with him earlier this month and he blew my mind. #2 would be Johnny Fischer from Local Opener because he’s my homie and I love his music. #3 is Taylor Cole from Tayls; I love that dude and his music is super positive. He always brings it. I would also say Erin Rae, but I’m terrified of her talent (ha-ha).

Taylor: I love The Basement East, Exit/In, and 3rd & Lindsley. But there are so many good ones.

Joey: I always have a blast at both Basements, Exit/In, and 3rd & Lindsley. Also, the Skydeck is pretty cool.

Taylor: I would have to say Stevie Nicks. If I saw Stevie walking around here it would fill my witchy little heart

Joey: Adam Granduciel; I really love what The War on Drugs are doing, and I think the Nashville music scene could use a band like that around town. But honestly a lot of my favorite bands already live here.

Taylor: Well, Roanoke is working on a ton of new music that we are excited to share. Joey and I are also working on solo music. There’s lots of exciting things in the works, and we hope to just keep playing music for anyone who will listen.

Joey: After the release of a solo record, I plan to make my way into producing. I’ve also been loosely working on a collection of poetry that I’d love to see published in the near future. But, of course, Roanoke is my main focus. I’ve been looking forward to touring with new music in the immediate future.