Thankfully the concert business is back to full steam and Music City is no exception. For many of us older music fans, it was a busy four days starting with Graham Nash (CMA Theatre) on Sunday, Beck (Basement East) on Monday, and then Tuesday and Wednesday at the Ryman with the campy and quirky Sparks and the legendary Bob Dylan, respectively. Trying to write something a little different than my norm, here’s a mashup look at those two Ryman shows. Don’t expect any great insight but just some rambling facts and a few random opinions.

One thing about the post-Pandemic return of concerts, tickets have gotten much more expensive and difficult to get.

SPARKS: Surprisingly, this ticket was not as tough to snag given the recent success of the splendid Sparks Brothers documentary film. The good seats did however go fast and there were only a few empty seats come show time. It was a bargain to sit down close for only $80.

DYLAN:  On the other hand, this show will go down as one of the most difficult tickets to score in Nashville history. I suspect it was a combination of things: speculation as to when Bob’s “never-ending” touring might end; his great recent record; and how out-of-towners love to travel to see their favorite acts at the Ryman. Prices for the good seats were quite high but it was an honor to pay $150 for a decent seat. Resale prices were obscene, and Craigslist was full of scammers.

The demographics of the crowds were rather interesting with both acts having long tenure: Dylan starting out in the 60s, and Sparks about a decade later.

SPARKS: There were many old timers who were Sparks fans back in the day, or some like me, who neglected the band during their prime, but found a greater appreciation for them after seeing the film. Also, there was a scattering of youngsters who obviously could relate to their sound which still sounds fresh and modern.

DYLAN: This was likely a record for the oldest average age at the Ryman. Most however were younger than Bob’s 80 years but many of us were at or near the age for Medicare enrollment. There were only a few who were born after Time Out of Mind won its Grammys. BTW – outside the venue before the show, there was a booth hawking Bob’s “Heaven’s Door” whiskey.

In an odd way, there were similarities to each shows’ staging.

SPARKS: The Maels were in the forefront with their crack backing band lined up in the rear. The stage was sparse, and all shirts and slacks were black except for Russell’s bright yellow pants. Sparks started about 20 minutes after the scheduled show time and played for just under two hours.

DYLAN: Bob stood behind his keyboards all night and like Ronald Mael, only ventured away twice. Bob walked out as if to only stretch his legs while the normally silent Ronald left his keyboard station for some lyrical recitation and silly dancing. All Bob’s men wore black and were also in the rear of the stage. And although the stage was elevated atop a lighted platform and Bob was back towards the middle, those in front looked like they were standing the entire show just so that they could see him. You could have set your watch to the show’s prompt 8pm start time and kudos to Bob who stood for the full 90 minutes even tough there was a piano stool available right behind him.

Rules and security were quite different for each night.

SPARKS: Show your proof of vax at the door and we will let you in to take as many photos and videos as you’d like.

DYLAN: No proof of vax required but devices were strictly banned to an extreme I have yet to witness. Upon entering the room by showing my mobile ticket, I was sternly warned that the phone still in my hand as I crossed the line into the hall was a violation in process! As I thought would happen, some fans snapped photos during the final number. Here is an example of such civil disobedience, although it’s not from the guy I saw being escorted out when he took a picture after the show had already ended! 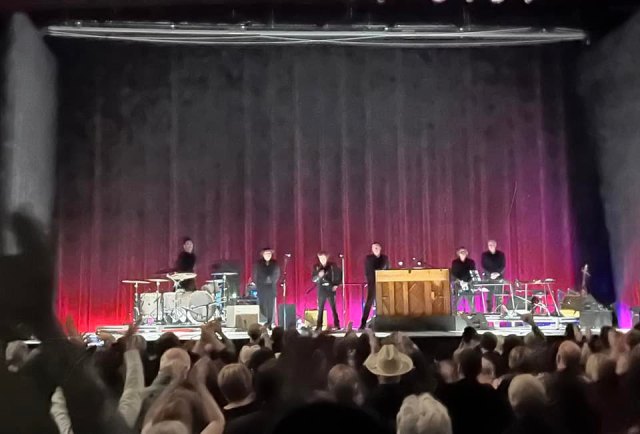 As to the true reason we all go to Ryman shows in the first place, how about Hatch Show Print posters?

SPARKS: They had a very nice one for sale that oddly mimicked the one that 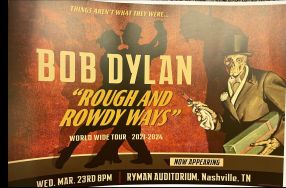 the band was selling of its own. If you missed out, its currently $100 on eBay.

DYLAN: Disappointingly, although he has let them be sold before, there was no Hatch from Dylan. There was however a generic tour poster with the specific venue name added and although not a Hatch, it will also set you back a nice sum on eBay as well.

And what about the state of the vocals of 80-year-old Dylan and 73-year-old Russell Mael?

SPARKS: Russell both looked and sounded amazing. With what might be the help of some dark hair-coloring, he doesn’t look or sound much different than he did back in the last century.

DYLAN: Most everyone knew what to expect from Bob’s singing. It was not like the 2005 show at Greer Stadium where there was a steady stream of shocked folks who following Willie Nelson’s set, left after hearing what Dylan sounded like. It’s a given though that Bob doesn’t sing melodies and still changes old songs around enough to make them take a while to recognize. But this time out, he’s playing a bunch from 2020’s Rough and Rowdy Ways that were written more as recitations than songs. It’s a fine record and this sits just fine for me. I must say that while the reworked “When I Paint My Masterpiece” was a huge disappointment to me, the new arrangement for “Gotta Serve Somebody” rightfully brought the house down.

It was also interesting how each show concluded.

SPARKS: After 50 years in the biz, Sparks finally made it to Nashville and were sincerely honored to be playing the sacred Ryman stage. After the last song was sung, Russ and Ron spoke of the thrill of playing the Ryman and took pleasure in posing for their customary end-of-show photo with their backs to the crowd. (Yours truly even got to make his way into the picture.) 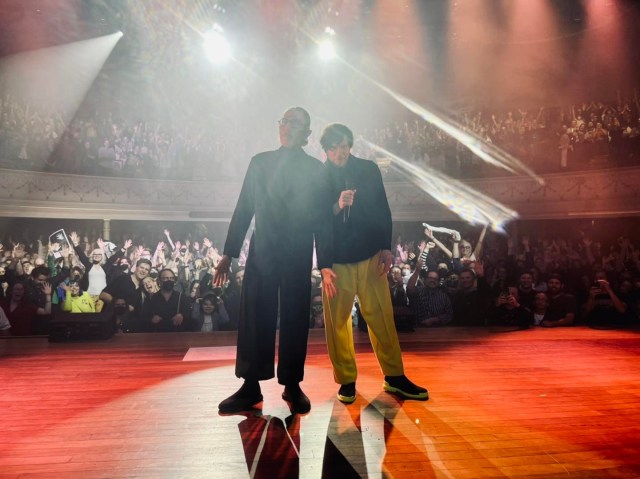 DYLAN:  His Bobness did not speak a word until his introduced his superb band as a prelude to his two-song encore without exiting the stage. Observant as the man is, I imagine that his remark of “Do they still call this Music City?” was precipitated by seeing the current state of Downtown Nashville.

And now, my final words.

SPARKS: Guilty! That’s how I feel after not paying more attention to this band back in the day. I even went so far as to not stay for a show of theirs in the 70s after seeing the opening act whom I craved at the time (Graham Parker & the Rumour). But fortunately, I feel somehow that seeing them now was seeing them at the peak of their career. If I could, I go see them again tonight!

DYLAN: I’m in awe anytime I am in the same room as Bob Dylan. Yes, I wish he had his old voice back, but he still is the greatest songwriter of his generation, and he still puts out amazing music and has one of the best bands you will ever get to witness. I plan on seeing him again as often as I can.