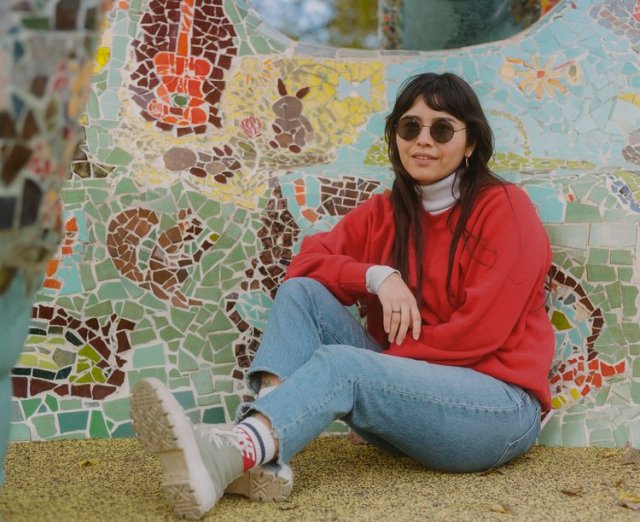 Well, 2022 continues to be a banner year for new music coming out of Nashville. My latest and greatest discovery is the three brilliant singles by Retro-Pop singer-songwriter, Carli Brill. Her soothing and sophisticated vocal styling is the sweetest thing that will hit your ears this year. I promise.

Don’t believe me? I challenge to you not get yourself lost in the smooth groove of “Concrete Jungle,”  a song inspired by the time she spent in New York City where she met her husband. And don’t stop there! Check out “Kaleidoscope” and “Hey Little Girl.”

Thanks, Carli, for this fabulous trio of songs and for your participation in 11 Questions. I am so sad to have missed your recent show at the Analog. I won’t miss the next one that’s for sure.

I’m from Grand Terrace, CA. It’s a really small city about an hour east of LA. Drive from LA to Palm Springs and you’ll pass right through it without even knowing! My husband and I moved to Nashville in 2019. We had visited years prior on a road trip around the states and fell in love with it. The South had always interested me even as a kid. I think my Junior High obsession with Elvis Presley is where that began. We knew from the start we didn’t want to stay in CA so when the time came for us to make a move, we revisited Nashville. We’re both artists but in different industries so it was the perfect combo for us. People look at me like I’m crazy when I talk about how Nashville is affordable, but compared to Southern California, my rent price here is a steal! I do miss my family though and good Mexican food.

The first CD I can remember being all my own (if you can even call it that because it was a burned CD from my 5th grade classmate) was Alicia Keys’ The Diary of Alicia Keys. That’s still one of my favorite albums. I grew up during the peak of Limewire so I’m ashamed to say we weren’t really doing a whole lot of “buying” at the time. But I will say the first album I’m pretty sure I purchased with my very own hard-earned money was Avril Lavigne’s Under My Skin. The most recent record I bought was The Beatles Meet the Beatles! I was pokin’ around East Nashville Antiques one rainy day and there it was in all its vinyl glory.

It’s hard to remember my first live concert. I grew up going to a lot of church music events with some big names in the Christian music scene at the time. Some of my earliest live show memories are of seeing this band called the OC Supertones. They were a really fun Ska band that my older sisters were obsessed with. The last live show I saw was Dashboard Confessional at the Ryman. My teenage dream comes true. Everything about it was perfect.

Patsy Cline! We have an entire museum dedicated to her and it only makes sense that she’s welcomed into the Music City Walk of Fame! She’s a music city icon.

I love a good atmosphere in coffee shops. Right now, my jam has been Ugly Mugs. Good music, couches, friendly staff, and I love the charm of how they’ll sometimes serve your coffee in random mugs! I’m really into the classic and cozy coffeehouse feel over a minimalistic vibe. I don’t go out for pizza much but will eat any slice that’s gluten free since I am one of the unfortunate individuals who cannot tolerate the wonderful world of bread.

Marty Robbins’ Gunfighter Ballads and Trail Songs. Some of the most beautiful songs I’ve ever heard are on that album. I could listen every day for the rest of my life and never tire of it!

All I ask is that they serve French fries. Dino’s. Fat Moe’s. Heck, even Cookout.

Some favorites of mine right now are Annika Bennett, Jackson Capps, and Graci Phillips!

I get warm fuzzies thinking about playing Belcourt Taps. It’s one of the first places I ever played in Nashville and I’m just really sentimental like that. Dream venue however would be that sacred space we call the Ryman.

Madison Cunningham. I’d love to bump into her at a coffee shop and spend the entire day chatting all things music. She’d invite me over and we’d play some songs together on her front porch while sipping black coffee. It’s not like I’ve thought this through or anything.

This year I plan to finish writing a full-length record. Shows on shows on shows are going to be my main focus as the year progresses. I hope to become better at performing. I’ll also be releasing some more singles throughout the year and hope to connect more with the people of Nashville.