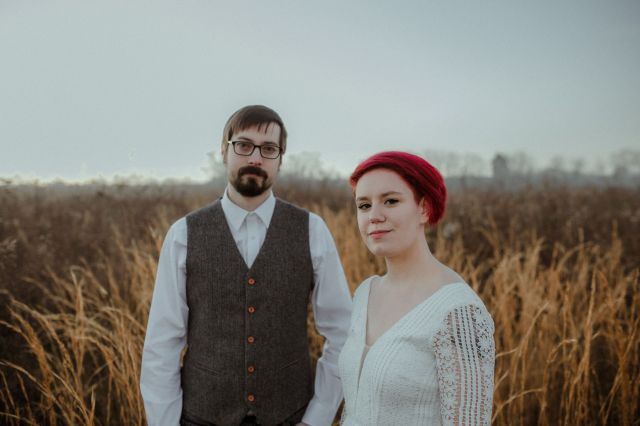 So far there are two singles out from the upcoming LP for your listening pleasure. Check out “Ghost Towns” right now and ponder Dale’s line “How do I set you free when the lost don’t want to be found?” which she sings to Cody’s stark accompaniment. Haunted Like Human evoke the musical dynamic of The Civil Wars who they acknowledge in this interview and are missed dearly by many of us.

Cody and Dale are currently out playing some live shows and local folks can see them at my favorite setting for a nice early evening. Head over to The 5 Spot in East Nashville at 6pm on October 14, the eve of the new record’s release. My thanks to them both for a lively 11 Questions session, and I’m looking forward to the show!

Dale: I grew up in Georgia in the suburbs of Atlanta. I came to town in 2015 to attend Belmont University and pretty much refused to leave at this point. I fell in love with Nashville the first time I visited, and even when I was going to go to college elsewhere, I wanted to end up here. Going to Belmont just expedited that process for me.

Cody: I grew up in the little town of Milton-Freewater in rural eastern Oregon. I made the move to Nashville in 2017 after my band back in the Pacific Northwest broke up. Originally, I just drove over to Nashville to see who I’d meet and do some co-writing, but lucky for me, I met Dale on my second or third day in town. Within a couple months, I’d moved to Nashville officially.

Dale: The first record I bought was definitely digital through the iTunes store. I actually sat down and went through the music on my phone to try to figure this out, and it was How to Save a Life by The Fray. OneRepublic’s debut record was probably the second one. My most recent purchase was online, but it was Lorde’s Pure Heroine on vinyl.

Cody: The first record I can remember buying myself was The Sufferer and the Witness by Rise Against, purchased on iTunes. It had a huge impact on me as a kid, and my love for music, and introduced me to a world of music that was different from what my parents introduced me to. My most recent purchase was Jason Isbell’s latest record Reunions on vinyl.

Dale: There were a myriad of church conferences that had a lot of music, but I’m not going to count that. I think my first concert was Kelly Clarkson and Maroon 5, and Kelly definitely upstaged the boys. The most recent one was The Lumineers right before lockdown! Cody got me tickets for my birthday and we both went.

Cody: Well, my last concert is the same as Dale’s. My first concert as a kid was Weird Al Yankovic playing at a fair somewhere in Washington State. My mom took me, and I was pretty stoked about it.

Dale: I’d say maybe Roy Acuff. He was a legendary singer and songwriter, and he also was a cornerstone of the music publishing industry, especially in Nashville. Seems like a good addition that exemplifies Nashville’s history.

Cody: I think my pick would be Jason Isbell. He’s such an amazing songwriter and has had a huge impact on me personally, as well as, I believe, a big impact on a lot of musicians that live here.

Dale: For coffee, I always go to East Park Donuts and Coffee. I am way too much of a regular there and know all the baristas by name. It’s equal parts amazing and embarrassing. Pizza has to be Five Points Pizza. The garlic knots are to die for.

Cody: For coffee, you’ll usually find me at Dose on Riverside. For pizza I’ve got to agree with Dale, it’s Five Points or bust.

Both: That’s nearly impossible to answer. The sheer amount of amazing music that comes out of this city incredible. However, The Civil Wars’ debut record is a standout for us.

Both: Late night after a show in Nashville, we usually end up at Mafiaoza’s. Dale worked there for quite a few years. They’re open late and have some good pizzas, pastas, and beer. Good for carb loading after a show.

Both: Without a doubt, our good friends Cas Cleo and Casey Fitzmaurice, the front man of Casey Fitz & The Nightshift. They are both incredible songwriters and people, and we’ve played plenty of shows with both of them. For our third pick, we’d probably try to call Caroline Spence.

Both: On one end of the spectrum, City Winery was a wonderful place to play. We love a listening room, and we’d love to play there again. For a completely different vibe, The Cobra has also been a really fun place to play. It’s a bar set that doesn’t feel like a bar set, and it’s just a cool place to hang out.

Dale: I’d have to say The Talbott Brothers! We opened up for them at City Winery when they came through town, and it was a fantastic show. They’re incredible writers and guys, and I’d love to see more of them. However, I also support Cody’s pick.

Cody: Justin Dye is an incredible songwriter who recently released his debut record. He lives in New Orleans now, but I’d love to see him come to Nashville at some point.

Both: In the immediate future, our new record Tall Tales & Fables will be out on October 15. We’ve been working on this record for a couple of years now, and we made it with local engineer/producer Mitch Dane at his studio Sputnik Sound. It’s almost surreal to finally be putting it out. For the next year or two, we’re really looking to being back on the road! We’re hoping to dive into more festivals next year and start crossing off some bucket-list venues.