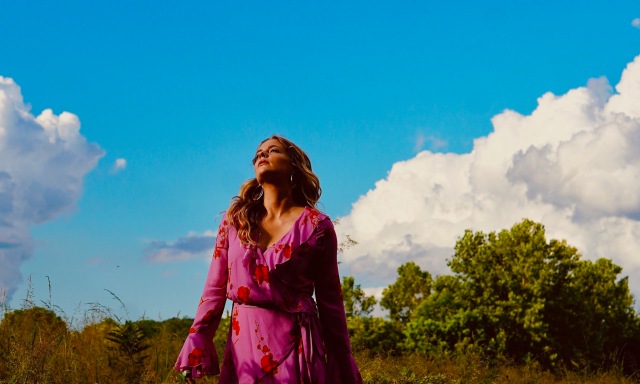 Nashville singer-songwriters Carrie Welling (today’s subject) and Alex Wong (a 11 Questions alum) have united to release their new single “Monster.” In a rather unique presentation, Monster has two versions that Carrie discusses in her interview below. Go and give some repeated listens to both the NIGHT and DAY renditions of “Monster” right now.

Wow! If this were the 80s, this song would be all over MTV. Now why did I say that? Aside from a meaningful message that presents itself for a poignant visual, it has a gorgeous dramatic sound led by an amazing operatic vocal from Carrie. It would have been a smash! Still, that doesn’t mean that the time isn’t right for “Monster” to see some solid radio time. (Are you listening Lightning 100?)

Carrie is coming off her 2020 full length album “High Heels and Heavy Things” that was produced by Eric Holljes from Delta Rae. Thanks for stopping by Carrie and we look forward to seeing you play around town soon as we watch “Monster” become a hit for you and Alex.

I was a government brat growing up, so I’ve lived in many places. I was born in Washington D.C and have lived in Germany, West Virginia, Colorado, New York City and San Diego. Now I am living in Nashville. I moved to Nashville about seven years ago to pursue a solo career in music. I was part of a female duo when I was living in NYC and was encouraged to perform on my own when we ended our band. I started working on my first solo EP with a producer in Nashville and eventually found that the music community was amazing, encouraging, and supportive. So, I moved to the South and love it!

I went to my first real live concert when I was 14. I was late to the game when it came to concerts. It was Jimmy Eat World at Roseland Ballroom in NYC. The last live concert was the Tedeschi Trucks Band at the Ryman. One of my favorite concerts to date.

So many! I know I was only supposed to pick one but here are three: Bonnie Raitt, Sheryl Crow and Alanis Morrisette.

My favorite pizza place is Five Points Pizza because you can walk up, and its fresh pizza made every day. The vibe is cool and reminds me of NYC! I love to order a white pizza with mushrooms. My favorite place to go for coffee is Retrograde in East Nashville. Something about the taste of their Almond Milk Lattes.

Where’s the best place to eat late at night after a show?

Dino’s in East Nashville! It’s kind of a tradition.

3rd and Lindsley, The Basement OG and the Exit/In.

I would love to see Patty Griffin move here.

I recently released a duel single with Alex Wong titled “Monster.” It’s a song about embracing our inner demons.  “Monster” has two versions to reflect the sphere of mental illness. There’s a full band version entitled “Monster (NIGHT)” representing the demons we push down and keep hidden, and “Monster (DAY)” exposing the beauty contained in our darkest parts when we choose to see them without judgement.

This summer, I will be embarking on my first post-Pandemic tour. I am so excited to tour again and be in front of people. My fans have been so supportive during the Pandemic by attending my virtual shows, but nothing beats the connections and interactions from an in-person audience.  This tour is titled “Happy First Summer Tour” and I have tour dates up the East Coast and in the Midwest.