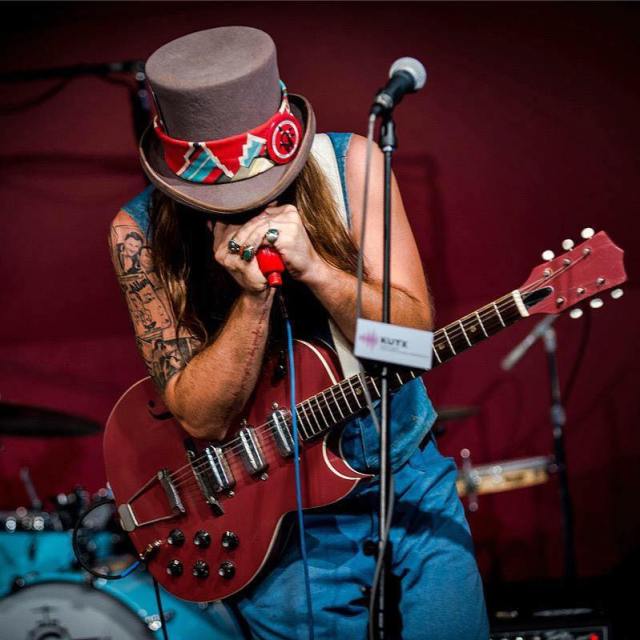 My pal “Pelikan” goes to hear local live music just about every night. So, when he tells me about somebody he likes, I listen. He described one of his recent finds as “the return of Leon Russell!” Well, I followed his lead and recently went to see King Corduroy at the OG Basement.

While the tall hat and long beard certainly favor the late “Master of Time and Space,” musically King Corduroy delivers a full band classic Southern Rock style that will remind you more of all those great bands you loved in high school. (If you are my age that is!) It’s a sound he calls “Cosmic Southern Soul.” In fact, if need be, King could slide ride in and take over as lead singer of The Doobie Brothers and no one would ever notice.

All that aside, King Corduroy has just released a sizzler of an EP called “Avalon Ave.” that was produced by the 400 Unit’s Jimbo Hart at the iconic FAME Studios down in Muscle Shoals. If you ask me, there is no place more fitting for King to record, and I’m sure that the ghosts in the room were happy with what they heard. Give a watch and listen to “Workin’ for a Livin’” from the EP.

I thank King for his “eleven” and look forward to seeing him play live again soon.

First CD I bought was Nirvana’s Nevermind at Coconut’s in Montgomery, but then I traded it with a friend from school for the Grateful Dead’s Skeletons from The Closet compilation CD. I bought a bunch of tapes at The Great Escape for the van before the last tour. There was an interesting Merle Haggard comp and a killer Willie Nelson duets album from 2000 called Milk Cow Blues on CD.

My Dad took me to see Ray Charles when I was about 10-years-old. He had a big-band with him, and they were performing songs off a two-volume record set that was always playing at our house: Modern Sounds in Country and Western Music. Those are still some of my favorite songs to listen to. Nobody interprets Hank Williams like Ray Charles. Just went and watched Trigger Hippy at The Basement on Sunday, and they sounded killer.

Can I nominate two? Guy Clark and Townes Van Zandt.

I hit Dose every morning for an egg & cheddar biscuit and a cold-brew coffee. I’ve been frequenting Italia for pizza lately. It’s mighty fine pizza.

Neil Young Harvest is such an incredible album. I discovered it in high school and have revisited it so many times through the years. It never feels like a bad time to listen to that album. I would imagine that a lot of people reference that record though so I will throw another in the ring, J.J. Cale’s Okie. In particular, the song “Cajun Moon” is so very groovy.

Well that depends on how you wanna feel the next morning, I dig M.L. Rose, especially after a show at The Basement OG.

The Basement, The BEAST, Dee’s and The 5 Spot.

We are taking off on a tour to support the release of this EP on August 23. I wanna work this record the rest of the year and then start on a new album in December or January. My vision is to make records in all the great music cities. So far, I have recorded one album cut in Austin and 3 EP’s cut in Nashville, Los Angeles and Muscle Shoals. Jimbo Hart (producer of Avalon Ave) just bought a house that has a killer studio on the property. I know he’s gonna be making a lot of albums out there, but I am also a huge fan of Memphis soul music, and I’ve always known I would make a record there eventually. Lately, I’ve been digging the sounds that Matt Ross-Spang has been capturing over at Sam Phillips Recording in Memphis.