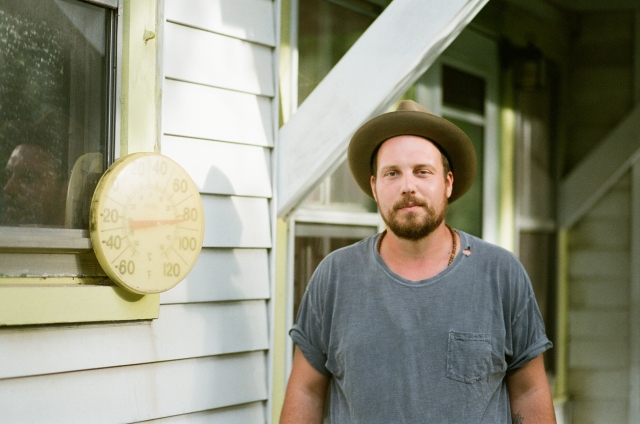 Singer-songwriter Darrin Bradbury has dropped a new single on us. Titled “Breakfast,” this countrified morning lament will be on his upcoming LP “Talking Dogs and Atom Bombs.” Set for a September 20 release on ANTI- Records, the record was produced by Kenneth Pattengale of The Milk Carton Kids. Just like a bowl of cereal, watching the video for “Breakfast” will provide a tasty start to your day.

This song follows Bradbury’s earlier release this year of “Newark,” a compelling story song that namedrops the least favorite city of all people who have ever lived in New Jersey. Watch this live performance of the song, and you’ll see why Darrin’s tunesmith and delivery recalls greats like John Prine and Steve Goodman. Like them, Bradbury has a knack for combining subtle humor within the commentary in his songs, and he sings them in a soft and gentle style that instantly puts you on a complete focus.

Well, you just missed Darrin on WMOT’s Finally Friday show, but he will be back to make us laugh and think in just a few weeks at Americanafest before he plays some shows in the UK later this year supporting Texas songwriter Jarrod Dickenson. I thank my New Jersey soul mate for taking some time with my usual questions. And while I of course agree that Jersey has the best pizza in the world, there are a few joints I want him to check out here in Music City. He seems like the kind of guy I’d like to grab a slice with.

I’m originally from the great state of New Jersey and moved to Nashville by way of Charlottesville, VA almost six years ago.

First and last live concerts that you’ve seen? Whose star should be added to the Music City Walk of Fame? [Looks like these two questions struck a nerve with Darrin!]

I think the larger question at hand is why the hell is the Grand Ole Opry in a shopping mall? I mean capitalism at its best, right? Let’s milk the most out of these tourists! Take the whole damn family to Bass Pro, then see Alan Jackson sing a song in the mall. Gimme a break! If you’re going in, go all the way. They ought to hold the Opry at the food court next to the Sbarro.

For coffee I go to SideKicks Café in Madison, a no-frills cup with friendly faces to boot. For pizza, the best thing to do is drive to New Jersey.

Big question, little answer. As far as records that have come out in my time here in Nashville, I’d say Jon Latham’s Real Bad News or Rayvon Pettis’ Dying Light.

My fridge. The usual go to is a PB&J.

The Bluebird hasn’t asked me back to since I did a round with Tim Easton and some other folks. I played this song I got called “Junkie Love.” There was a family of five presumably from outta town that seemed to feel subject matter was a bit more than they bargained for, and they got up n’ left outta protest.

So to answer your question, I’d choose that family. Fly ‘em out from Ohio or whatever and hear what kinda songs they got cooking. Cuz they seem to be experts.

The Basement, The Five Spot and until recently, the Radio Cafe (R.I.P.)

Matt Benjamin is a friend of mine from NYC who currently has a good gig moving furniture, but in his spare time writes the best songs I’ve ever heard.

I try not to think too hard on those types of things. I’ve been pretty fortunate so far, so I tend to cherish and appreciate what I have so as to not get too caught up in wanting more. I’ll always write. It’s just what I do. How long they’ll keep me on the payroll, well that remains to be seen.