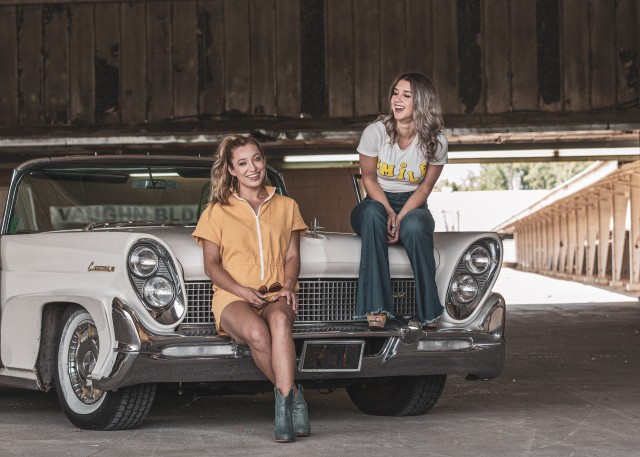 Katy DuBois and Alaina Stacey, the talented singers and songwriters who comprise the Indie/Americana duo Maybe April, find themselves sitting on the launch pad about to blast off. With strong advance press from major players like Rolling Stone Country and Billboard, their upcoming debut album, “The Other Side” is ready to put their musical journey into full swing. Their fun and clever video for “Truth Is” is now out and  the lead single “Need You Now” is also available to give you a taste of their lovely harmonizing.

The two young ladies first met in 2012 at a Nashville music industry camp here in Nashville which quickly led to the formation of Maybe April. Writing and playing together since then, things started to blossom in 2018 when CMT named them one of 2018’s “Rising Acts,”

Thanks Katy and Alaina for spending some time with our usual questions. Maybe April’s album release show is this Thursday, August 8, upstairs at one of my favorite music rooms, the High Watt in the Cannery Building. The new record follows on Friday, August 9.

Alaina’s first CD was No Strings Attached from NSYNC. It was a hand-me-down from her older brother. The most recent album Alaina bought was the digital Dying Star from Ruston Kelly. Katy’s first CD was Britney Spears’ …Baby One More Time. She doesn’t remember where she got it. The most recent album Katy bought was the digital The Mountain from Dierks Bentley.

Alaina’s first concert was Ben Folds at Summerfest in Milwaukee. The last live show she went to was her friend Elisabeth Beckwitt’s show at Back Corner in Nashville. Katy’s first concert was Shania Twain in Little Rock when she was three years old. Her most recent show was her husband, Zach DuBois, in Michigan.

Maybe April of course! Just kidding. We think Kacey Musgraves should be added.

This is a hard one!! So many great albums have come out of Nashville through the years across genres, but recently we can’t stop listening to Kacey Musgraves’ Golden Hour. It’s an amazing album that embodies what we love in country music and just music in general.

We love The Listening Room, City Winery, 3rd and Lindsley, and the High Watt.

We are so excited to release our debut full length album on August 9th! After that, we will be touring around sharing our new album with anyone and everyone who will listen.