11 Questions to a Nashville Musician: The Cerny Brothers 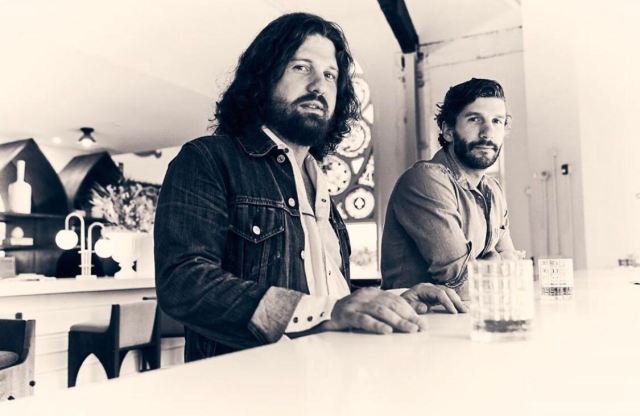 Musicians and caring fans know how tough it can be to be an unknown opening act. Yours truly has even written about it.  Well, how about trying to get the attention of 2,500 old gray-haired prog rock fans wearing tee-shirts from every Yes tour since Rick Wakeman started wearing capes? Such was the case at the recent Jon Anderson Ryman show when Americana duo The Cerny Brothers managed to capture the collective ears of the crowd with just piano, guitar and passion. That’s when I knew that I needed to check these guys out.

Named by Rolling Stone magazine as a “New Americana Artist You Need to Know,” The Brothers have a barnstorming new video for “Laugh At The Devil’” filmed at the Raccoon Motel in Davenport, Iowa. The song comes from their new album “Looking For The Good Land.” This is a duo out to win fans the hard way—one at a time through energizing live performances.

In addition to their latest LP, on July 4, the Cerny boys also released a five-song EP celebrating our great nation. With the simple but meaningful title of “Common Sense,” it’s a fine musical example of patriotism without partisanship. “We’re not looking to push any specific ideology,” says Scott. “We’re just making observations about what we’ve seen. Across the country, whether you’re a musician or a plumber, you’re looking for your piece of the American pie. Everyone is.”

Thanks Bob and Scott for spending some time with 11 Questions. The brothers head out on the road soon opening some dates for one of our favorite former Nashvillians, Justin Townes Earle. Look forward to a local show soon.

We were born in Fort Belvoir, VA and grew up in Northwestern Illinois, right by the Mississippi River that forms the border between Illinois and Iowa. We moved to Nashville about three years ago from Los Angeles. We felt that our music fit better in Nashville. we were closer to Illinois which is where our roots are, and touring was generally much easier.

Bob: I think the first album I bought was The Backstreet Boys Millennium, and at the time, I thought it was so great. I think I was around nine years old. It was definitely a CD, because I remember playing it in my CD player.

Scott: I think I bought a Cypress Hill album. It was a CD.

Bob: Vanessa Carlton was my first, and the last one was probably Buddy Guy and Kingfish at the Ryman.

Scott: Ben Folds was the first, and the last was Buddy Guy and Kingfish at the Ryman.

Bob: We go to Bongo Java a lot. We’ve tried a lot of different pizza joints, but my favorite is Mafiaoza’s. Especially on Tuesday’s, because it’s two for one beer. And Bob likes beer.

The Hermitage Cafe. Definitely spent some time there.

To be honest, we’re not too hip to the scene. We spend a good amount of our time in our studio writing songs, so I’d say if given the chance we’d have our friends and producers Nathan Meckel and Mark Niemiec, who we share adjoining backyards with, and our neighbor Robbie who plays banjo would be a fun addition as well. So basically, a big neighborhood bash.

Our friends Folk Family Revival would be cool. They’re from Texas and currently living there.

Only time will tell, but some money would be chill.