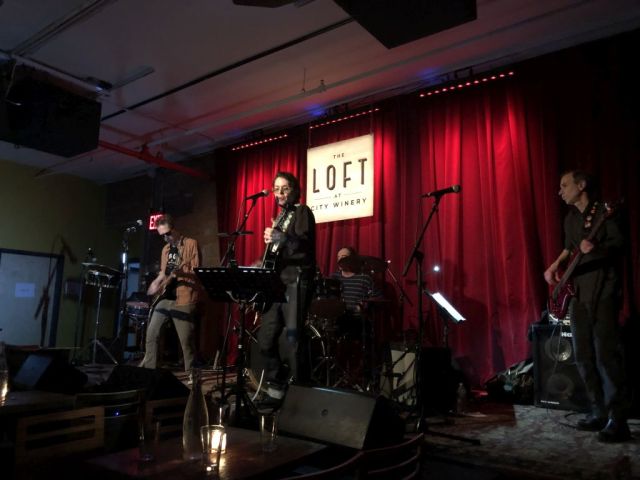 You couldn’t flatter me more than by calling me a music geek. As a bonafide geek, my greatest source of pride are the cherished songs and records in my collection that most ordinary folks have never heard of. Listening to them is one thing but getting to hear any of these old songs performed live is truly a bonus. I could only imagine how great it must be to not only be a music geek, but one who is also a musician and can get the extra joy of being one who can recreate the old hidden gems that they love.

One musician who does just this is Richard Barone, the Hoboken born, and New York City-based former member of the great 80s band The Bongos. Over the years, Barone has been doing some cool special musical events, and he recently launched his first “Loft Party” at the Manhattan City Winery’s comfy and cozy upstairs smaller space.

On this unseasonably hot late winter’s evening, Barone brought along for the ride a fellow local musician with a similar love for his record collection, Feelie’s guitarist and his friend, Glenn Mercer. The two came up with a musical theme for the night that probably had them giddy for weeks before just thinking about the cool songs they were going to get to play. Without trying to pigeonhole too much what was on their setlist, it’d be safe to label it “Glam Rock of the 70s.” It also served as a fitting tribute to Roxy Music’s upcoming induction into the Rock & Roll Hall of Fame.

The most represented artist of the night was the well-misunderstood Brian Eno of whom most people don’t realize could also write songs that rocked. And Barone and Mercer are two fine guitarists who quickly reminded us of that fact with a stunning cover of “Needles in the Camel’s Eye” from Eno’s 1974 debut solo LP, Here Come the Warm Jets. The set had started with a song from Roxy Music back from when Eno was still a member. Continuing in this Roxy vein, the boys went deep and even did “Big Day,” a song from Roxy’s guitarist Phil Manzanera’s 1975 debut solo record.  On record, Brian Eno sang the lead vocal, but that chore tonight went to Feelie’s drummer Dave Weckerman who was on duty this evening.

There’s no doubt that two of the artists no longer with us that some of miss the most are Lou Reed and David Bowie, and music from both was also represented. Of course, including those two without some Iggy Pop would be totally unacceptable.

While the music on stage was as tight as could be, the rapport with the crowd was loose and Barone encouraged and even had some music geek dialog with some patrons about seeing Bowie live.

The singing and twin electric guitar work of Barone and Mercer was spot-on spectacular. The rhythm section of Weckerman and Bob Torsello (Shrubs and Glenn’s solo band) kept the pace and was augmented on a few cuts by friend and former Feelie Vinny DeNunzio on percussion.

Barone and I really connected when he expressed his love for T. Rex and kicked off “Jeepster,” perhaps the hardest song to sit still too that’s ever been written. T. Rex’s late leader Marc Bolan is another who will never be forgotten, and it’s thrilling to hear his music brought to life. This killer rocking cut was followed by the trippy “Mambo Sun,” another Bolan classic that Barone reminded us his band The Bongos has covered and taken to the US record charts. Bongo bassist Rob Norris took over bass for this one as he later would for the two Bongos numbers in the encore.

The main set closed with Bowie’s “Moonage Daydream” from the Ziggy Stardust record. After kicking off the encores with a song from Television’s Tom Verlaine’s 1979 debut solo record sung by Weckerman, the guys did a few of their own songs. Barone did a pair of Bongos, tunes and Mercer did one from his Wake Oolo side project.

Wow! What a great night of music, and I can only think of what more we might see from these guys at future Loft Parties. One mystery will be just where that will be as sadly, the City Winery will be relocating from its current Varick Street home. I sure hate when this stuff happens as a part of Manhattan’s ever-changing face–especially after seeing the incredible investment that owner Michael Dorf has made in this space, including the lovely Loft.

One more thing before I go. Prior to this 10pm show, the 7pm one at the Loft featured a brilliant set by David Johansen. Richard mentioned that he invited David to join them, however he declined due to a prior engagement. I can only imagine what this sage of the New York rock scene could have contributed. Just think of all the time he probably spent with time with Reed, Bowie and Iggy at Max’s Kansas City and the stories he may have told. Maybe next time.