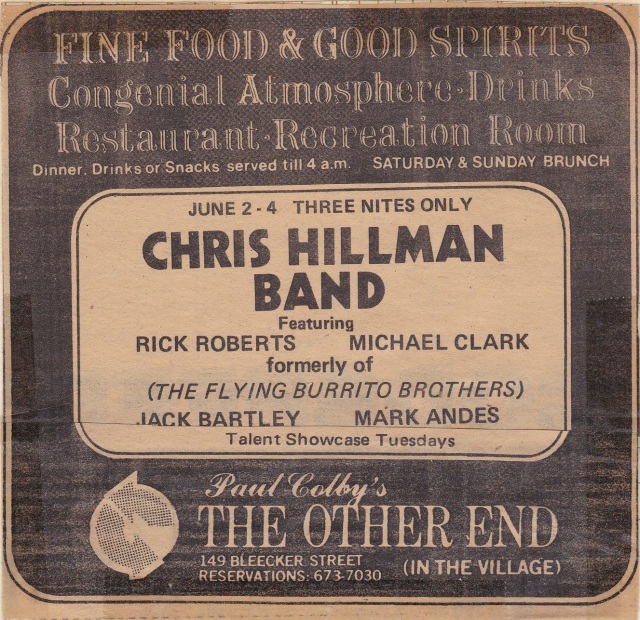 In the middle of the 70s, my Jethro Tull and Black Sabbath posters were replaced with ones more reflective of my move towards what we then called country rock. And, while I delighted in hearing new music, I had a deep love for earlier records by Poco, The Byrds and The Flying Burrito Brothers. While these bands by then were either gone or reassembled without original members, I did my best to follow what those guys were now up to.

Gram Parsons of course had passed on, but I jumped at the chance to see Roger McGuinn, Chris Hillman or Richie Furay play any chance I’d get. In June of 1975, after recently seeing four shows by the ill-schemed Souther Hillman Furay Band, I was quite excited about getting to see Hillman and McGuinn separately at New York City nightclubs. While Roger would be playing at the newer trendy Bottom Line, Chris would be at older but still erudite Other End, the legendary Bleecker Street coffee house once known as, and later rechristened back to its original name, The Bitter End.

If I remember correctly, during this period, The Other End took non-money-down telephone reservations and did not sell advance tickets for most, if not all shows. Another thing to remember about these pre-internet days was that concert news travelled quite slow if at all. In fact, a friend and I once arrived at the club to see Johnny Rivers only to find a sign on the door saying that the show was cancelled. Back at this time, about the only way to get news like this was through the radio. A local station like WNEW-FM might mention a concert cancellation, but it was unlikely to happen for a small club show like this one.

Getting to the June 4, 1975 subject matter, I arrived alone at The Other End on this Wednesday night to find another sign on the door. Chris Hillman had taken ill, but tonight’s show would go on without him, instead featuring his backing band. I recall a simple roster of the band members listed on the door, and since these names included Rick Roberts and Michael Clark, I was happy to go along for the ride. Both were members of the last incarnation of the Burritos with Hillman, and Clark of course was the original Byrds’ drummer.

So, I paid my freight at the door (probably $4 or $5) and was greeted by the club’s famous owner Paul Colby who told a host to “Find this young man some nice ladies to sit with!” I don’t recall any ladies, but I did get a great seat near the left of the stage right outside the backstage door.

After the opening song, the band introduced themselves as Firefall. Rick Roberts took the helm and told us that they hailed from Boulder, CO like Chris Hillman who flew back home under doctor’s orders. They then decided to fly in the other member of their band (guitarist-vocalist Larry Burnett) and continue with the shows on their own. The two other non-Burrito band members there originally to back up Hillman also had some fine pedigree of their own: Jock Bartley was the guitarist in Gram Parson’s Fallen Angels and Mark Andes was the bassist for Spirit.

The night turned out to be a real treat from this fine country rock band whose set list sprinkled in some familiar songs such as Robert’s “Colorado” from the Burritos record that Linda Ronstadt had also covered. In addition, we heard most of what would later become the first Firefall record. It was a most enjoyable evening, and I remember shaking Rick’s hand and congratulating him on a fine performance as he left the stage.

Well, as it turns out, Hillman’s misfortune led to the start of Firefall’s success. Some record folks in the audience liked what they saw and quickly signed the band to Atlantic Records which lead to a somewhat stellar but checkered career for the band. While there were chart hits and platinum records, the band had a multitude of line-up changes over the years, several of which centered around Roberts’ health issues. Their fine-tuned country sound also morphed over the years into one that was just too MOR for my taste. Nonetheless, it’s quite fun to recall this unexpected historic moment from my musical past.

An incomplete low-fidelity audience recording and the partial set list from one of these shows can remarkably be found here. Seven of the ten songs from that debut record (released in April of the following year) appear on this recording.

← Jason Isbell & Amanda Shires @ CMA Theater / Nashville, TN / December 5, 2017
What to Do on a Musical Vacation in Nashville →